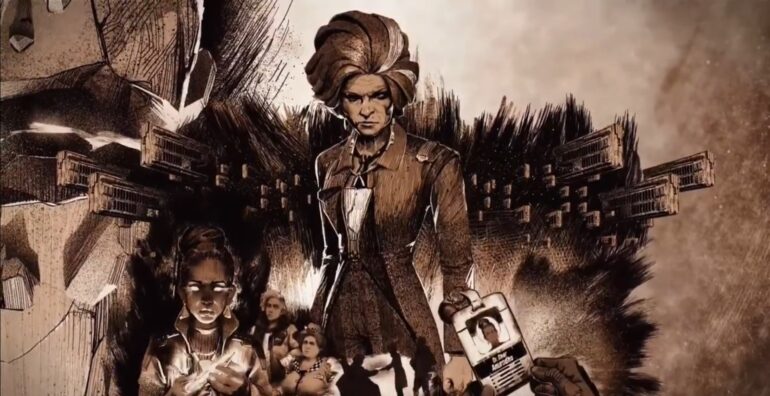 Capital Pains is the 3rd episode of the New Tales From the Borderlands. After a grueling battle with the Devourer in Chapter 2, the team will find themselves questioning what to do with the green crystal. At the end of Chapter 2, Anu’s ID was dropped accidentally and Tediore might have found out that the crew might have it. In this guide, we will explore the whole walkthrough of Episode 3 and see what awaits players.

Returning back to Fran’s shop, players will be given the option to test the green crystal by letting any of their teammates hold it and shooting the person who holds it. Any character will do but if players will choose LOU13, it will not work on robots as the crystal can easily cure wounds instantly.

Anu will suggest harnessing the crystal power by using her phaser. The crew will be required to find the materials listed below for them to harness it using the Tech Goggles:

After gathering them, head to the fridge at the back of the shop and players will encounter again the Tediore soldier who is into figurines. He will demand a rematch and once he is defeated, he will reward the crew with a Vasquez Vaultfinder fig.

After the rematch, grab one of the fuses from the box while using the Tech goggles to fix finally the phaser.

With the device fully working, the crew will go and join a game show to ask for funding for their newly invented device. Upon entering, a guard will appear and a tough decision will occur as to whether let LOU13 kill him or let him live.

Inside the studio, a contestant, Pierre Pallantine will greet the crew while LOU13 is awaiting outside on standby. Anu will start to feel nervous and Octavio and Fran will attempt to get back at him by hacking his device and sabotaging it.

As the show begins, Pierre’s device goes out of control and he will be eaten alive by sharks. A tough decision will present itself either letting him die or healing him with the healing ray. If you pick No, 3 questions that should be asked will be skipped and the crew will present their device to the judges.

As Anu is dropped into the shark tank, the crew must rescue her by grabbing the device from the air increasing the Skateboard Score. Do the QTE sequence and the audience will cheer the crew. Eventually, using the device to heal her leg will help them win the prize money.

After winning the show, LOU13 will talk to the crew and will ask for advice from Fran. A dialogue will begin and players must choose these two options to ensure that their friendship with Fran is better:

With the newly invested money, Octavio will need to find a new HQ and Fran will need to look for new members while Anu must find more supplies.

While controlling Anu, meet with the Keeper of Dead and buy a corpse from her then explore the lab and interact with the surroundings to not only recapitate the corpse but also find another rematch with the Tediore soldier once more. Defeat him and a new EPIC Vaultlander figurine will be given.

Upon examining the corpse, use the Tech Goggles to scan the following:

After scanning, pick up the head and the metal bar to recapitate the corpse back together. Then, the Keeper will come and trap Anu inside a coffin to as a bounty is offered by Tediore thus ending Chapter 3.

That’s pretty much everything you need to know about our New Tales From The Borderlands Episode 3: Capital Pains Guide. If you guys are interested in Borderlands-related articles, check out the following links below:

Also check out Manugames92‘s full walkthrough on the 3rd episode of New Tales from the Borderlands: