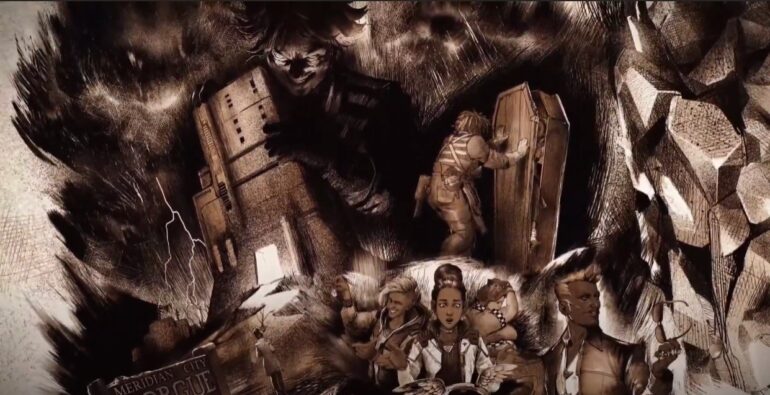 False Advertising is the 4th episode of the New Tales From The Borderlands. After being kidnapped by the Keeper of the Dead, Anu must find a way to get out of her predicament before Tediore comes and imprisons her. This guide will teach all the steps to clear Episode 4 and what awaits them.

As soon as Anu breaks out of the coffin, The Keeper will attempt to stop her by killing her. Either punch or use the scalpel to escape. If players choose the scalpel, Anu will need to leave Keeper’s body in the morgue.

Once Anu has escaped from her abduction, she will reunite with Octavio and will go to their new HQ using all of their prize money. Another tough decision will be presented either choose Super Sciencey Innovation! or State-of-the-Art Security System for what Octavio spent. Regardless of what was chosen, both are flops and cheap knock-offs that send Anu into a flying rage.

The whole gang will be interrupted by the Tediore soldiers and Brock will shoot and kill Anu. A QTE sequence will begin until Fran will be given a choice of comforting Octavio or Killing Brock. The best choice is to comfort Octavio for it will earn a lot of respect from her allies but at the cause of letting Brock escape. after which, the crew will use the device to revive Anu from dead

As the crew revives Anu using the device, an alien force begins to possess her. To escape the pursuit of the Tediore soldiers, they head to the Angel Investor.

Once the gang arrives at Angel Investor’s hacienda, Octavio meets up with his business idol and Anu is given her personal lab. Inside the lab, use the Tech Goggles to scan the chemistry set and balance the fluid’s ph balance using an alkaline. After which go to Jabber and scan him.

To get Jabber to pee, interact with the radio and return to him to get the alkaline sample. Then, head to the supercomputer to repair it by reading the notes on the whiteboard and main desk to troubleshoot it.

Once Anu’s task is done, the scene will change to Fran who is living her dream of turning her frogurt shop into a global franchise. Inside her shop, go to the back entrance and interact with the car trunk as Badass Superfan will appear and challenge you. Defeat him to receive another figure then, head back inside and interact with the frogurt machine. Interact with the following items to clear some chores needs to unlock the blocked room:

After doing all of this and the blocked room open, go inside and do the following tasks:

After you’ve completed those tasks, go back to the front of the shop and finally make your froyo.

Now the scene will change to Octavio who is peer-pressured into trying a drug. A tough choice is given or whether to take it or not. Pick no and the game will give you another chance to fall into peer pressure. Either choice Octavio will be tricked and get caught alongside Anu.

Anu and Octavio are captured and shocked to learn that their Angel Investor is actually Susan Coldwell. Knowing this and learning that Fran and the rest of the crew have been apprehended, they had to give up Anu’s device and the crystal with it. As much as possible avoid panicking as Anu as it will reduce the overall Skateboard Score.

As soon as the shard is given up, Susan starts to show how it works and her plan to take over the galaxy. Suddenly a tough decision shows up either choosing to save Octavio or the Shard as Anu breaks free of her prison. Fran will try to stop Susan but will end in failure thus ending the whole episode.

That’s pretty much everything you need to know about our New Tales From The Borderlands Episode 4: False Advertising Guide. If you guys are interested in Borderlands-related articles, check out the following links below:

Also check out Manugames92‘s full walkthrough on the 4th episode of New Tales from the Borderlands: