Learn about the new tank dropping in at the start of Overwatch 2. 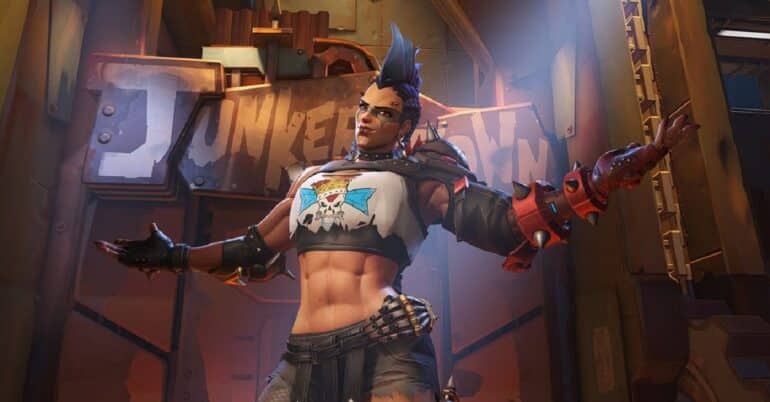 In Overwatch 2 Junker Queen is one of the new heroes making her debut on launch date. This new tank hero has her own set of devastating abilities that perfectly suit the 5v5 nature of this Overwatch sequel. Learn more about Junker Queen Abilities in Overwatch 2.

Junker Queen is a tank whose abilities really incentivize players to fight up close and personal. Most of her abilities inflict bleeding damage which allows her to heal thanks to her Adrenaline Rush passive. This gives her a lot of survivability and encourages players to be aggressive even when low health.

All Junker Queen abilities in Overwatch 2:

The Scattergun, a pump-action shotgun, is Junker Queen’s primary weapon of choice. The Scattergun is a shotgun that has a small spread that makes it extra scary at short range. Shotguns in Overwatch are familiar to those who have played Roadhog or Reaper, two other characters from Junkertown. As a tank, she won’t be able to deal as much direct damage as other damage heroes, but she can still inflict some damage.

Adrenaline Rush is Junker Queen’s passive ability which protects her from all wound-related damage for the duration of the effect. Wounds from many of her abilities slowly drain the health of her opponents. Her ability to survive and attack is bolstered by this passive ability to steal lives. When it comes to brawling, Junker Queen feels like a tank whose survivability is directly linked to the number of enemies she inflicts damage on.

Jagged Blade is Junker Queen’s secondary fire. When you press secondary fire, her active ability activates, causing her to hurl the knife out of her off-hand. When she uses her knife, which she affectionately refers to as “Gracie,” to inflict a wound on an opponent, the damage she does is cumulative. Using her magnetic gauntlet, she can reactivate secondary fire and bring back the knife. It’s best to keep a close eye on your surroundings if you’ve been struck by Gracie, because you’re headed straight for the Queen.

Jagged Blade’s passive ability wounds enemies when Quick Melee is used with the knife in her hands, making her even more intimidating at close range. Adrenaline Rush, her life-leech passive ability, benefits from all of these wound-application abilities.

A large ax swings in an arc in front of Junker Queen when Carnage is activated. When she uses Carnage, she unleashes a massive, sweeping swing that deals damage to all enemies in her path and triggers her Adrenaline Rush ability. A wound inflicted on an enemy will cause it to take longer to heal. With the help of allies, Carnage can be used to quickly clear an area and eliminate enemies.

Because Commanding Shout emphasizes Junker Queen’s tendency to charge headlong into battle, her ability to close distance was intentionally designed as a movement speed buff rather than something sneaky like a short dash or teleport. In an unrelenting display of aggression, she brute forces her way past her opponents. Taking charge and cutting off flanking enemies while leading her team through tight chokepoints increases her effectiveness.

Rampage is Junker Queen’s Ultimate. Rampage inflicts devastating wounds on enemies, and impedes their recovery with an anti-heal. As Junker Queen’s primary means of wounding enemies, Rampage gives her a significant health boost when used in conjunction with Adrenaline Rush. Depending on how many wounds she manages to inflict, this gives her the potential to use Adrenaline Rush to heal herself significantly.

Junker Queen is a hero that excels in close-quarters-combat. She really doesn’t have that much abilities made for dealing with opponents far away. If you’re playing as her, you’re pretty much a menace in close quarters which makes those tight corridors and hallways your territory.

Tips For Playing As Junker Queen in Overwatch 2

Junker Queen is a close quarters fighter that can soak up a lot of damage but she still needs her teammates. Since there is only one tank in the game per round in the sequel, you have a lot of pressure on yourself to lead the charge. Don’t be afraid to get up close and rely on your Adrenaline Rush passive ability to heal from damage. A lot of your abilities can inflict bleeding which you should take advantage of.

Your Jagged Blade (Active) is your main go to ability for dealing with enemies from a distance. Enemies, once hit by the knife Junker Queen lovingly calls “Gracie,” can be pulled to your location. Use this to target vulnerable enemies and draw them in close.

Save your Commanding Shout for team fights and when your group is coordinated to make a push. The extra health and speed can be a significant factor when accomplishing objectives.

Her Scattergun does a lot of damage up close. You can use Jagged Knife (Active) to draw far away players in for a kill. Anyone who is unfortunate to be in melee range will get a taste of your devastating Carnage ability.

Your Rampage ultimate is also good for getting up close. When the enemy heroes are perfectly aligned, don’t hesitate to hit them all. Don’t bother using it for only one opponent, but when you have a clear view of everyone let it rip. Those hit will be unable to heal. If your teammates are nearby, use Commanding Shout to turn the tides into your favor and tell your team to become extremely aggressive.

Overwatch 2 has greatly changed the dynamic of tank roles since the reduction of one player from each team restricts teams to only having one tank each. Junker Queen is a hero that was made with perfect intentions to reflect this change.

Did you know you can actually further these abilities through the use of Talents? Each hero in Overwatch 2 has their own talents you can invest in for PVE content. Read our Overwatch 2 Talents – All Hero Skills and Abilities for more information.

Those are the Overwatch 2 Junker Queen Abilities we hope that you found our article to be informative. Stay with us some more because we have more Overwatch 2 content that you’ll be interested in.

Check out this Youtube video from Tikatee explaining the new meta for tanks in Overwatch 2. This is pretty important if you want to know how to use Junker Queen.