A guide on how to obtain all rewards in the Lost Sands adventure in Sea of Thieves. 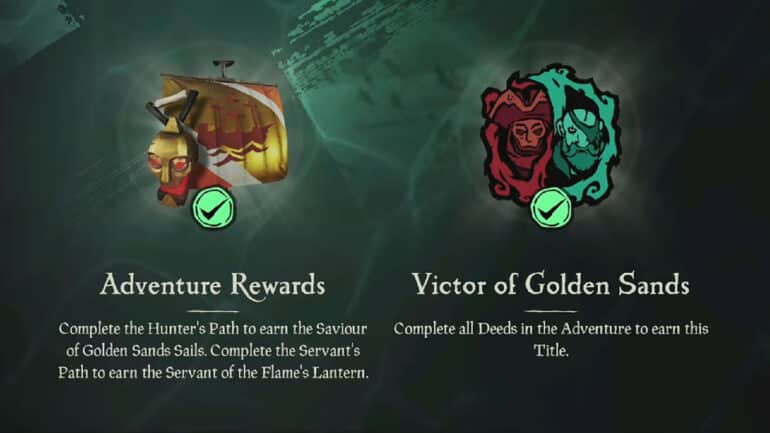 The Lost Sands is the fourth and newest adventure to happen in Sea of Thieves. In this adventure, players will have the chance to decide on what will be the fate of the Golden Sands Outpost as it has been shrouded by the Fog of the Damned.

In this guide, we will be talking about the all Sea of Thieves Lost Sands Adventure Rewards that can be received during the Lost Sands adventure as well as how to obtain them.

Can all Lost Sands rewards be obtained?

Yes, both the rewards for the Hunter’s Path and the Servant’s Path can be obtained as evidenced by the third adventure reward. You’ll earn three Mementos if you complete all 11 Lost Sands Adventure Deeds

Here are the rewards, also known as mementos, that you can obtain from the Lost Sands adventure:

The 11 Deeds are actions related to certain parts of the adventure and these deeds are distributed between the two paths. Completing all deeds will reward you with the Victor of Golden Sands title. These deeds can be tracked down via the Menu > Adventure > Deeds screen.

If you like this Guide, be sure to check out our other Sea of Thieves articles:

Check out this video by PhuzzyBond showing a quick guide on how to go through the Lost Sands adventure: