Workbenches are often hidden very well in Sniper Elite 5. Where are the Workbenches in Mission 3? 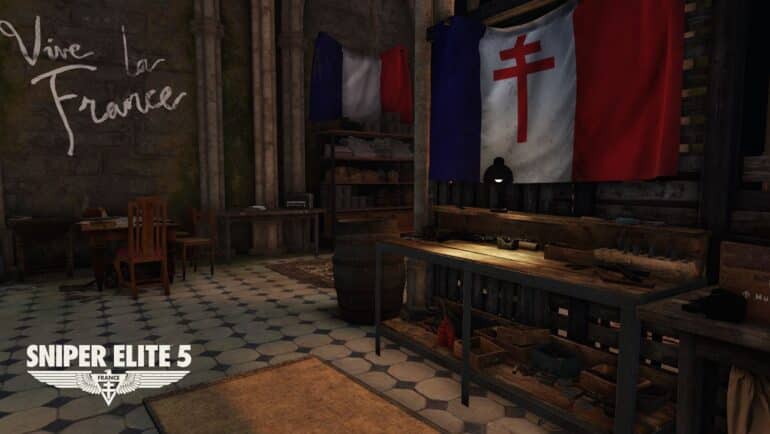 Players are looking for the Sniper Elite 5 Spy Academy Workbenches. The map for this mission might just be the most condensed out of all the missions in the game. It makes it particularly difficult to locate where the workbenches are with the entirety of of Sniper Elite 5 Mission 3 laid out like a maze.

Where to Find the Workbenches in Spy Academy?

There are three workbenches in Sniper Elite 5 Spy Academy. We’ve listed the ways to find each one here:

Workbenches will unlock new customization options for your loadout so it’s always a wise idea to search for them. It will take some time to search for them on your own as they’re well hidden and are usually spread far from each other. We’ve created this list to help you find the exact location of the Sniper Elite 5 Spy Academy Workbenches. Read our Sniper Elite 5 Weapon Customization guide for more information on what Workbenches can do.

Down below are detailed instructions on where to find the Sniper Elite 5 Spy Academy Workbenches that are scattered throughout the area.

The Rifle Workbench is near the end of the level just before you exfiltrate the mission. It’s located on the northern edges of the fortress.

You’ll have to go down the tower first and make your way downwards where the beach is. After descending far enough, look to your left and you’ll see the vines you can use to climb up. Channel your inner Nathan Drake and climb up the vines growing on the side of the fortress.

After climbing the top of the vines, you’ll quickly find the Rifle Workbench.

The SMG Workbench is hidden in a resistance safehouse in the middle of the highly guarded Nazi fortress. You’ll have to wander past a lot of guards in the streets to reach it.

You’re looking for a red car parked horizontally in the middle of the street. Right in front of it are ledges on the wall painted in white. You can grab on to those to climb up until you reach the door on the right.

After climbing continue past the tunnels and you’ll eventually reach a room with the French flag hanging on the wall. The SMG workbench is there.

The Pistol Workbench is higher up in the fortress inside a fortified armory. You’ll need either a satchel or the Armory key to open it.

The area you’re looking for is easy to locate as it is just above the stairs. After climbing three sets of it, look left and you’ll see the metal door into the armory. If you don’t have a Satchel charge to blow open the door, you can loot the Nazi officer nearby for the Armory Key.

After opening the door by either using the key or blowing it up using a satchel, you will find the Pistol Workbench just underneath the Nazi flag.

That’s all the Sniper Elite 5 Spy Academy Workbench locations. We hope you managed to find all the workbenches in this level with our help. Don’t go just yet because we have more Sniper Elite 5 content for you to check out.

If you’re looking for a video tutorial, then this Youtube video from Trophy Tom shows you where to find all the Sniper Elite 5 Spy Academy Workbenches.