Using the Rat Bomb can be pretty confusing in Sniper Elite 5. Just what exactly do you do with this unique mission item? 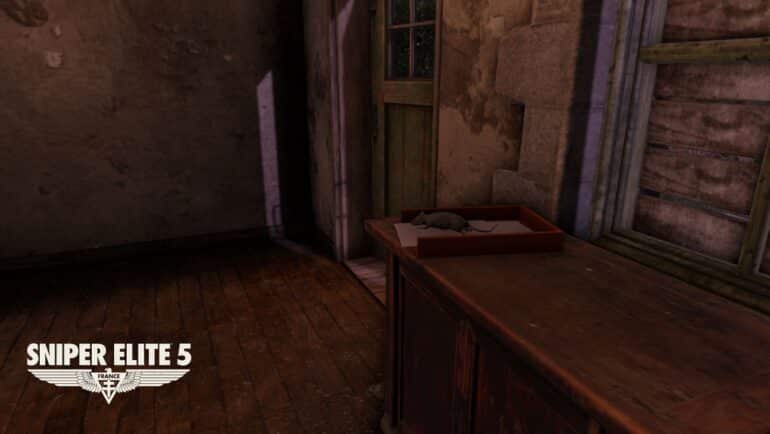 The Sniper Elite 5 Rat Bomb challenge is confusing many players as it isn’t very specific. What is a Rat Bomb and how exactly do you use it to kill Ehrlich in the War Factory mission? In this Sniper Elite 5 guide, we’ll teach you all about the Rat Bomb.

How to Use the Rat Bomb in Sniper Elite 5?

You have to plant the Rat Bomb inside the storeroom where Matthaus Ehrlich is without being seen to use it. Here are the steps to using the Rat Bomb:

The reward for killing Matthaus Ehrlich is the Machine PIST.44 SMG, but you cannot simply just put a bullet in him. The requirement to complete the challenge and unlock a new secondary gun is by killing him with the Sniper Elite 5 Rat Bomb.

The Sniper Elite 5 Rat Bomb isn’t listed in the official Sniper Elite 5 Weapons: Every Weapon in the Game and the War Factory mission is pretty much the only time in the game you ever get to use it. Here are detailed instructions on how:

Pick Up The Rat Bomb

Choose to spawn at the default location of the level. Before you exit the Resistance safehouse, a resistance member will talk to you about the Rat Bomb. Pick up the Rat Bomb before going through the door.

After exiting the Resistance safehouse, another resistance member just outside the door will talk to you about Matthaus Ehrlich, the man on the inside who has been giving them bad intelligence. He requests you to kill the man. Open your map to see where he’s located.

Find a Route to the War Factory

After sliding down the first zipline, you have multiple options to get to the War Factory by the distance. While you can cross the river by going to the left, it’s the longer route and is more heavily guarded. Look to your right and you’ll see to more ziplines just past where two German infantry soldiers are talking.

We recommend taking the zipline to the left above the stairs as it is a more direct route. It will take you the fastest to Ehrlich’s location so you can plant the Sniper Elite 5 Rat Bomb and unlock the Machine PIST.44 SMG as a Secondary.

Sneak Through the Guards without Alerting Anybody

It is very important that you do not alert anyone on your way to Matthaus Ehrlich. They could potentially ring the alarms and alert the whole level. If you get spotted, quickly take out guards quietly because you risk having to restart the level. You won’t be able to kill Ehrlich with the Rat Bomb if he’s been alerted unless you can manage to knock him out amidst gunfire.

It should be easy enough to sneak to where Ehrlich is if you followed our advice and took the zipline above the stairs. Just don’t be too reckless on your way.

Plant the Rat Bomb in the War Factory Storage Room

Once you’ve made it to where Matthaus Ehrlich is, you’ll have to wait until he starts going to where the German officer is before you plant the Rat Bomb. There are a few places inside the storage room you can place the Rat Bomb in. There are indicators for where you can plant it much like a Satchel charge.

Alternatively you could knock out Matthaus Ehrlich and drag him to where you planted the Rat Bomb before shooting it to trigger detonation. But the other way is better.

Wait for Ehrlich to Finish His Meeting

Ehrlich will head inside to the officer’s room after some time. They’ll talk about his dealings with the Resistance and how he’s feeding them bad information. After a minute, Ehrlich will come out frustrated and wander around the storage area. He will see the Rat Bomb where you have placed it and shoot at it in rage.

The wonderful part about killing Ehrlich this way is that it doesn’t alert anybody. Not even the German officer who’s inside the building. Despite the loud explosion, you’ll remain undetected and you can reap that Machine PIST.44 SMG for yourself.

Don’t go just yet, because we have more Sniper Elite 5 content for you to check out.