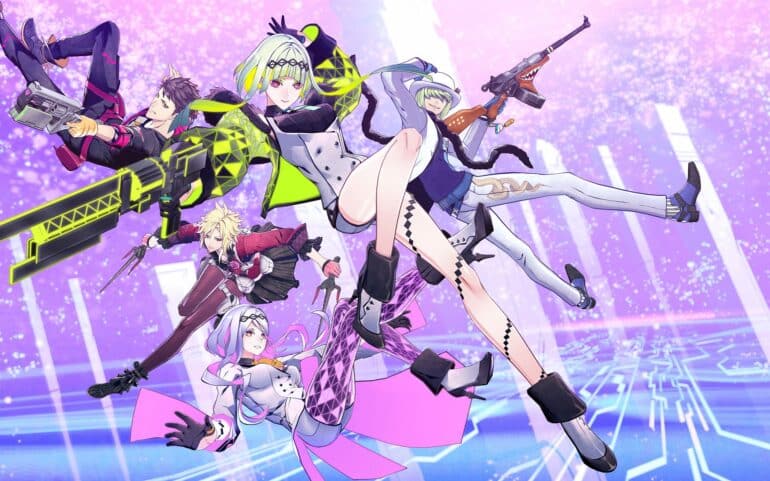 “Mid-21st century, a story set in a not-so-distant future. Devil Summoners are those who live in the shadows of society, harnessing the otherworldly powers of “Demons.” Another entity, Aion, quietly watches over the world of humanity. A sentient data collective born beyond the periphery of technology as an entity transcending human intelligence, Aion one day detects and observes that the end of the world is approaching. Ringo and Figue, agents of Aion and individually autonomous splinters of its mind are brought into the human world to stop this inevitable destruction. Their objective is to locate and protect two individuals necessary to stop the world’s end. However, they soon discover both individuals have already been killed.

Ringo executes Aion’s special ability “Soul Hack” to bring one of them back from the dead, and then other Devil Summoners killed for reasons unknown. Joining forces with these Devil Summoners given a second chance at life—with their own motives pertaining to their own deaths― Ringo and Figue must uncover the truth behind the world’s end.

Will they be able to stop the impending apocalypse…?“

One of the agents of Aion, a futuristic digital sentient being. As an entity that was just created, she displays a keen interest in human society, culture, and emotions. Her choices and efforts, along with those of Arrow and her other fellow Devil Summoners, will be instrumental in deciding the fate of the human world.

Another of Aion’s agents, like Ringo. Cool and thoughtful, she acts like an older sister to Ringo and keeps her in check, as Ringo tends to be more stubborn. She, too, displays interest and admiration for humans and is friendly to them. She specializes in analyzing information and supports the team from behind the scenes.

An agent of Yatagarasu, one of the Devil Summoner factions. He is one of the individuals whose death supposedly plays a part in triggering the apocalypse. He was seemingly murdered during an undercover investigation and is resurrected with Ringo’s soul hacking. Normally gentle and quiet, but deep inside he is passionate and follows a strict moral code. Because of this, he often clashes with Milady.

An agent of the Phantom Society, another of the Devil Summoner factions. She’s killed by her own allies for reasons unknown. She is resurrected by Ringo’s soul hacking and decides to work with her to find out why she was killed. Calm and collected, she operates with logical thinking and efficiency, sometimes leading her to make decisions that others may deem heartless. It seems this may have something to do with her past.

A freelance Devil Summoner. Although he’s murdered by a Phantom Society agent, he is resurrected with Ringo’s soul hacking. He decides to accompany Ringo and her team with a certain objective of his own in mind. A romantic at heart, he plays it cool in his own endearing way. Able to read the room, he often mediates and steps in whenever Arrow and Milady clash with one another.

With a long history, they have lived alongside normal humans, adapting themselves to the societies and time periods they occupied. Forging contracts with demons, they wield powerful abilities to solve paranormal incidents incomprehensible to regular humans. On the other hand, there are also summoners who take part in more illicit activities, like violence and assassinations. There are factions of devil summoners, and in the process of trying to avert the world’s end, Ringo becomes involved with two opposing ones in particular: the Phantom Society and Yatagarasu.

A special gadget that assists devil summoners with their ability to summon demons. The shape of COMPs depends on each person, and some may choose to use and modify them with accessories and items they’re emotionally attached to. Ringo’s COMP has been altered with Aion’s technology, and it can be directly equipped with demons.

After detecting the world’s destruction, Aion deploys entities downscaled to take human form to stage an intervention. These are Ringo and Figue. With their own consciousness and mental autonomy, they are biologically near identical to humans. They can also utilize Aion’s powers, though in more limited forms.

One of Aion’s features, this ability allows one to intervene with and restore a human’s soul and heart. By soul hacking those who have just died, Ringo is able to tap into their memories right as they died. By triggering their regret in death, she is able to resurrect them. It’s a feature that is still shrouded in mystery, and even Ringo and Figue do not fully grasp everything about it.

Spiritual entities have lived alongside humans since time immemorial. Not always malevolent, as deities and fairies are also collectively referred to as demons. Devil Summoners are able to form contracts with them and tap into their powers through COMPS. At a certain location, it’s said there are rituals to combine demons to create new ones.

When attacking demons, by unleashing precise moves like striking their weaknesses, you’re able to summon a mob of demon allies. The summoned allies will attack the enemies all at once. This attack is called a Sabbath, and utilizing this smartly will allow you to wipe out your foes.

The story of Ringo and her team unfolds in a glitzy Japanese metropolis. Within this city of regular citizens, to whom demons are only myths and stories, there are cities that only Devil Summoners can enter called the Realms. Realms are said to be veiled from the world by a barrier imperceptible by regular humans. In this city, demons freely mingle with Devil Summoners, with facilities for summoners that allow demon fusions, COMP enhancements, and information gathering.

At the murder scene of the target Figue was searching for, there was a dying message left in code beyond any human cryptography. Figue analyzes this undecipherable message, revealing only the word “Covenant.” What does this mean…?

Soul Hackers is set to release on PS4, PS5, Xbox One, Xbox Series X|S, and PC (via Steam) on August 25th in Japan and August 26 worldwide. The game comes in both Physical and Digital Editions. Each with their own bonuses.

Not only that, the game has a special 25th-anniversary set that includes the game, a music album that has over 30 songs, a 25th-anniversary book, DLC costumes, BGMs, accessories, a figurine of AI Ho-kun, and also Persona 5 costumes as well.

For more ATLUS news, check out: