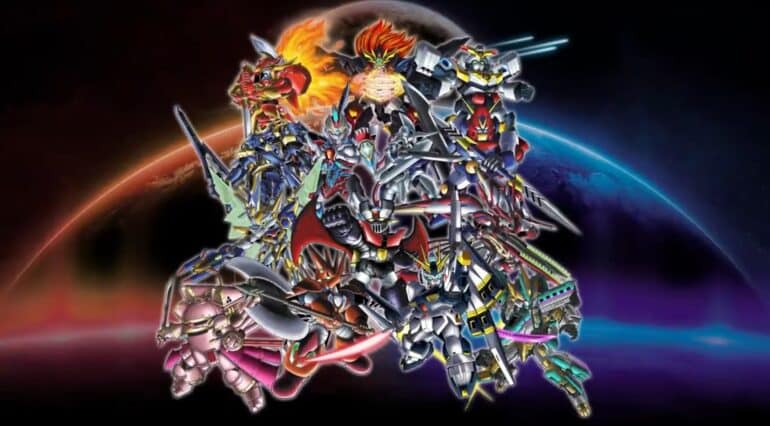 Super Robot Wars 30 is back and now the developers of the game have announced downloadable content to come to the game once more as new story content and new characters & mechas will appear in the game. Some new and some old mecha animes will be joining the popular lineup of the SRW 30 game.

There will be two DLCs that will be released by Bandai Namco. The 1st DLC is a free update that will have new area missions, new limited missions, and new story content as well. Not only that, two new mechas from the SRW franchise will be joining the game as well.

Being a Super Robot, the Grungust has a somewhat bulky with thick armor and is significantly larger in proportion to Personal Troopers. The body parts generally look very thick with simplistic, cartoon-like body lines. Another distinctive feature is the large jet turbines mounted on the robot’s shoulders. It is currently being piloted by Irmgard Kazahara (CV: Kenyu Horiuchi)

This mysterious mecha was found deep inside a gigantic ruin on Mars. Not much is known about it, including its creator and purpose, and its technology is more advanced than Earth’s. Its cockpit lacks several common features as commands and information are sent and received directly to the pilot’s brain. It works best with two pilots, one to maneuver the robot and the other to act as a radar. This mecha is piloted by Asahi Inui (CV: Kenji Akabane) and Schatte Südwesten (CV: Asami Seto).

The free DLC update will be available for all consoles which include the PS4, PC, and Nintendo Switch on April 20 at around 7 AM JST.

The 2nd DLC that was announced is a new paid expansion pack. This expansion pack will have new series that will join the game, new missions as well as a new difficulty setting called Super Expert Mode Plus. As stated, the new mecha series will be joining the Super Robot Wars 30 line up and they will be playing a major role in the new story content.

The alien Wulgaru’s last assault against humanity was foiled by the heroic actions of the genetically enhanced humans known as the Evolved Children in their advanced AHSMB battle armor.

Now a new attack has been launched against Earth under an even deadlier champion, Diorna, created from the fusion of DNA from two Wulgaru Royals. Unfortunately, Izuru Hitachi, the leader of Team Rabbits who defeated the Wulgaru Royal Jiart, is still out of action and recovering, so the task of marshaling the Majestic Princes and stopping Diorna falls upon the unready shoulders of Toshikazu Asagi.

Together with the remaining members of Team Rabbits and the recently created Team Fawn, it’s up to Asagi to hold the line against the most ruthless adversary yet.

From the Super Robot Wars OG series, Aussenseiter & DyGenGuar are two iconic OG units that bring out the greatest combo of attacks especially when they use their ultimate known as Tatsumaki Zankantou.

Seeing these two units would be a great addition to the SRW 30 DLC lineup of characters plus a great chance to see them in action again. Dygenguar is piloted by Sänger Zonvolt and is known for its melee especially for wielding a giant buster sword that can literally cut through anything. The Aussenseiter is piloted by Ratsel and is known for its speed and accuracy on long-range attacks & can transform into a mechanical horse specifically for DyGenGuar to perform wicked combos and attacks on numerous enemies.

The new enemies, Nahane and Ohanefu, along with the mysterious new Giant Monstrous Beings appear from space to take over the Earth! Holding the key to these events is Shinkalion ALFA-X, which was secretly developed by the Ultra Evolution Institute…!?

For Hayato and Team Shinkalion, who had been living in peace, the battle begins again. Hayato cannot hide his anxiety after his father Hokuto goes missing during an enemy attack. Meanwhile, a 9-year old Hokuto suddenly appears from across time and space! The young Hokuto, who has slipped through time with the Glowing Particles, determines to become the driver of Shinkalion ALFA-X, which brings together the latest technologies to protect the Earth and return it to normal.

Together in their thoughts, Team Shinkalion, brought together from Hokkaido Branch, Yamagata Branch, Ōmiya Branch, Nagoya Branch, Kyoto Branch, and Moji Branch confront the strongest enemy in the universe.

Can Team Shinkalion protect the peace and security of Japan!? Can Hayato reunite with Hokuto!?

Getter Robo Devolution: The Last 3 Minutes of the Universe

From the artist of the manga version of Netflix’s Ultraman comes a classic anime coming back to life as a new Getter Robo story enfolds. A group of spatial distorting aliens called the Devolved, start attacking the planet.

Three teenagers, Ryoma Nagare, Hayato Jin, and Musashi Tomoe are brought together by Dr. Saotome for their connection to the mysterious Getter Rays. The three of them together need to pilot the most powerful weapon, the Getter Robo, in order to defeat the Devolved.

Also appearing in the SRW 30 DLC are returning mecha animes that have new and improved original designs and will be making their debut soon.

Super Robot Wars 30 is available now for everyone on PS4, Nintendo Switch, and PC (via Steam).