Who is Nezarec in Destiny 2?

Here's everything we know so far on the Nezarec, disciple of the witness 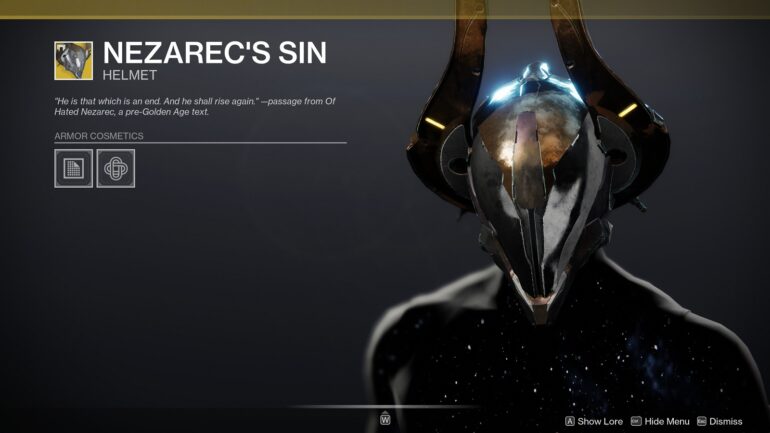 This week sees us inching closer and closer to some painful truths. Eido will have to come to terms with what her father truly is and Mithrax will eventually share more about his dark past with all of us. But the most Earth-shattering revelation has got to be the confirmation that one of the Witness’s disciples has indeed laid dormant within the Lunar Pyramid… and that the hated one will rise again. I’m talking about Mysterious Nezarec, Disciple of the Witness.

We don’t exactly know yet. But there have been some clues here and there since the Witch Queen expansion launched. As far as we know, he is a Disciple of the Witness. As described in the text, “Of Hated Nezarec”, he was known to pre-Golden Age humanity. He was there during the Collapse.

Eido, scribe of House Light, brought to our attention something she found while researching the artifacts. It was an old Guardian report about a fireteam finding Eliksni crews fighting over “chunks of rotting meat”. We didn’t know it at the time but those remains belonged to Nezarec. So this begs the question, who or what killed Nezarec?

Season of Plunder shone some light on the disciple that was only teased through a couple of pieces of gear, namely Nezarec’s Sin and Nezerac’s Whisper. Though the glaive was added relatively recently to the game, we had no idea what they are referring to until now. Additionally, it’s also safe to say that the Delicate Tomb exotic fusion rifle, introduced this season, is in reference to Nezarec as well.

Through an eye-opening revelation, we find out that Eliksni refugees were the first to find Nezarec’s remains on the moon. The Eliksni sensed great power from it and decided to carve it up in order to possess it.

We learned that Mithrax inherited a piece of Nezarec and with it committed horrible crimes against his own people. If it weren’t for him going towards the Light, I’d hate to imagine going up against a Mithrax that’s fully empowered by the Darkness.

The artifacts that we were trying to gather are what’s left of Nezarec. If you listen closely to them on the H.E.L.M. you can even hear a faint whisper.

If you want to learn more about what happened last week, check out our article talking about it along with that week’s reset of activities.

This brings us to today. We always suspected that Drifter knew more than he was letting on. He knew what those artifacts were the moment he saw them, and it wasn’t the first time he encounter them either. He felt something similarly eerie within the Fourth Tomb of Nezarec. I’ve got a feeling we’ll be visiting those tombs in the near future.

“For Nezarec is no demon, but a fiend, arch, and vile in ways unknown. He is a path and a way, one of many. And his – so wicked, so divine – is that he will never cower when dusk does fall, but stand vigilant as old stars die new Light blinks its first upon this feted eternity.” – Passage from Of Hated Nezarec.

Before this current season, Nezarec’s Sin was the first time that came to mind when talking about the disciple. An exotic Warlock helmet from the days of Vanilla Destiny 2, it boosts ability regen on void kills. As handy as it is for an Exotic, I think the text about Nezarec is the most interesting part of it.

We assume whatever Nezarec will look like, this helmet might offer clues about what he’ll look like in the future. Or not. The helmet was first introduced in the base game. I doubt Bungie planned that far ahead at the time considering how much the game has changed over the years.

“On the floor, a length of unidentifiable metal caked in centuries of dust catches her eye. A glaive. Eris lifts it into her hand. Striations of red illuminate on its surface and throb like a heartbeat. The glaive’s power feels faint – distant – and yea, an ember of something terrible still burns within”

Eris too had an encounter, though only through a whisper. Nezarec’s Whisper was introduced last season during the Season of the Haunted. The lore text made it very clear to everyone that Nezarec was a disciple of the Witness and it was only a matter of time before he was going to be introduced properly to the game.

The Delicate Tomb Fusion Rifle may have only been introduced at the start of the season but never did I think of it as anything but a very fun Arc fusion rifle. But lo and behold, the Lore Text says all I needed to know about what it truly is.

“Yet one among them understands, in their limited fashion. They pour from one vessel to another. A welcome change. A new form. Another method of gifting death.

I am made finite. Personal. Bright and delicate to hide my true form. An intimacy.

They think me contained, but I am instead diffused, as vapor upon the wind.

Once again, I am becoming.”

I hope this little recap was enough to bring you up to speed with everything relating to Nezarec. Now, we don’t actually know if we’ll be facing off with the actual Nezarec in the future or not. Ressurection is a term that has been tossed around quite a bit but that remains to be seen. We can be fighting another shadow for all we know. It wouldn’t be the first time. But anyways, that’s all we have on the subject for right now. We will be updating this article if need be so watch out for that.

Check out our latest article talking about perk combinations for the craftable weapons that were added this Season of Plunder. Anyways, that’s it. That’s all. See ya guys in our next article.

Also, check out this video from Youtuber Aztecross where he reacts to the story update for the sixth week of the Season of Plunder.