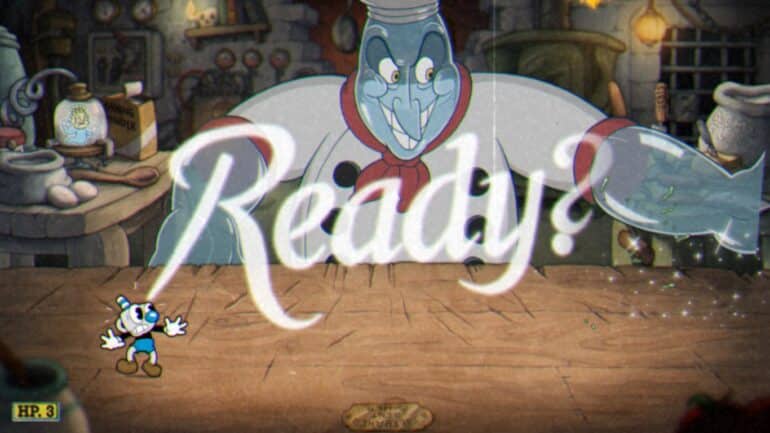 The Cuphead DLC‘s A Dish To Die For level is where you’ll face the final Boss, Chef Saltbaker. In typical Cuphead fashion, the brothers somehow get over their heads with forces they did not understand. But hey, they were just trying to help out the Legendary Chalice after all. At least they weren’t trying to.

The final boss fight is spread across 4 stages. The first is on the chopping block. The second stage is on the boss’ palm. And finally, the third and fourth stages take place in a salt desert. (You might as well call it a different dimension at this point.)

The fight requires quick reflexes and a good amount of familiarization with the boss’ attack patterns.

The first stage sees us right in the middle of a chopping board. A fireball dives to the bottom of the screen before rising up to the other side. Think of it as a constant threat throughout the first two stages.

The boss can be seen in the background working on the ingredients, with great anticipation of our demise.

The boss has 4 separate attacks you need to counter. At the start of each fight, the initial board changes the game will spawn a random attack before the fight begins.

Once it’s started, however, you can look at the background to know what he has in store for you next. This is a brief description of each attack and how to counter them.

Knowing the patterns of each attack is crucial in this fight. You’re not just evading 1-2 attacks on-screen. At times, you may be dealing with up to 2 separate attacks at once AND the fireball that’s slowly bouncing around the place.

Whatever you do, do not lose track of that fireball. Always keep it in mind because it will sneak up on you while you’re distracted by whatever it is the boss is doing in the background.

To advance to the next phase, just keep shooting the boss while evading everything he throws at you.

Having had enough, the boss will lose his cool and take us into the palm of his hands and deal with us personally. In this phase, we’ll be dealing 4 pepper shakers on all four corners of the screen, slowly falling leaves and the ever annoying fireball.

Your target this time isn’t the boss itself, per se. What you’re aiming at are the pepper shakers. The idea is to launch them and use them as projectiles against the boss.

You’re going to be doing this while evading the pieces of pepper (I assume?) the shakers shoot at you, falling leaves, and that pesky fireball. The fireball will keep doing what it’s been since the last phase and keep going up and down, left and right. The falling leaves are easy enough to dodge once they’re close. Just go the direction in the direction they are going and time a jump to get past them completely.

Just shooting at the pepper shakers won’t instantly launch them at the boss, just so you know. They don’t have an invisible health bar to them. Wait for them to shoot their projectile before you start shooting at them. That should be enough to initiate the attack on the boss.

Keep doing this for at least a half dozen times or so to finally beat this phase. If you see salt falling in the background, that means it’s time to take the fight to the salt desert.

The third phase is, quite honestly, the shortest yet deadliest phase of the entire boss fight. You’re going up against a fast-moving pair of dancing salt figures with a massive hitbox and a hard-to-time bouncing pattern.

To make things more interesting, there’s a pizza cutter lurking under the salt, just waiting for you to make a mistake.

The phase doesn’t take too long at all if you focus on the salt figures but they pose such a danger that it is an almost guaranteed hit the longer the round goes on. I’ve died so many times in this section alone, it’s almost comical. But my own personal complaints aside, if you breeze through the first two phases, you can afford to get hit once during this phase.

The final stage starts with the whole world on the brink of collapse. Glass platforms will start following down and you need to jump up each platform in order to stay in the fight.

Our target is an angry float heart. I don’t what we did take it and look at us so angrily. So, since we’re in the boss’ world, let’s assume everything hates us.

Two saltnadoes are churning violently at our flanks. I don’t need to you that it is in your best interest to avoid it. At all costs.

Oddly enough, the angry-looking heart isn’t angry enough to charge at us. It’s good too since I dread looking for platforms above while paying anything to the heart. No, the heart is content with shadowing your movements. Maybe it’s waiting for you to mess up before moving in for the kill.

This may be the final surprise in the fight. Keep jumping platforms while pumping damage into the heart and you should be good. And of course, keep well away from the bottom of the screen.

It was a challenging boss, I’ll give the game that. It didn’t have the same gravitas as the fight with the Devil but I sort of get why it’s a bit easier than the boss of the base game. Players have access to the DLC as early as Isle I. I can’t expect it to be harder than anything we’ve faced in Isle II. But with that being said, the DLC did end graciously. And that’s something you’ll have to find out for yourself.

Check out this video by Boss Fight Database featuring the Final Boss Fight and Ending on Cuphead DLC: