The Devil's bones makes a cameo in this fight 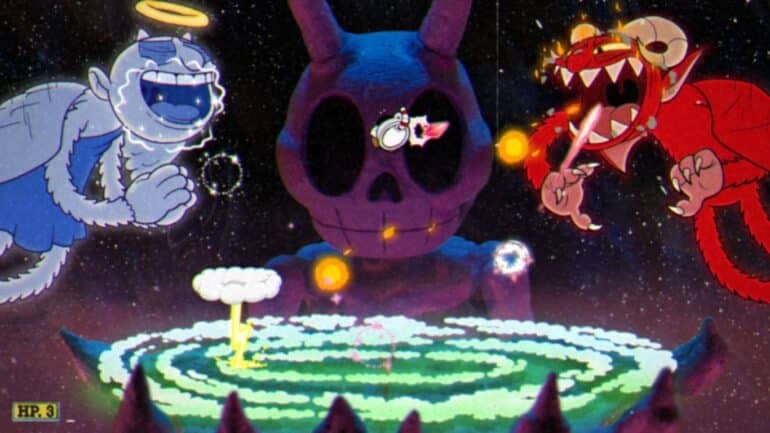 The Angel and Devil boss fight in Cuphead DLC is a secret encounter that requires the player to solve the tombstone puzzle in order to access it. It is tied to the Divine Relic secret quest via the need to have the Broken Relic as your Charm throughout the fight.

The arena lies on the bony palms of the Devil himself (not the one on the right, the big boss from the base game.) A cloud goes to either side of the arena in a curved fashion. You don’t want to be underneath the cloud if you can help it.

You are always facing the devil in this one-stage fight. And by that logic, the Angel is always on your back. (I don’t what that means for the Cup brothers…)

So, the unique part of this fight is that the element on the screen will change depending on where you are looking. The devil will shoot fireballs at you while the angel will shoot harmless halos. The second you look away at the incoming fireball, it’ll turn into a halo by the time it touches you. The opposite also applies.

Turning your back only becomes necessary when the devil summons a pillar of fire. There’s no way to avoid it other than to turn it into a waterfall of sparkles. It’s a judgment call whether you want to start running or not but whatever you do, don’t turn back until the waterfall passes.

Since the tracking is so strong with both sides, I would often go on top of the cloud and ride it for a stretch of time to avoid any fireballs and halos. The stray fireball might displace me every now and then. When that happens, I just head to the center of the arena.

The fight ends when you’ve done enough damage to the devil.

For a secret boss encounter, the Angel and Devil boss fight was kind of underwhelming. I think this is just a prelude to a far more challenging fight in the future. I sure hope so, at least. Anways, it served it’s job as the requirement to begin the process of opening up the eye and unlocking the Divine Relic. Stick around to learn more about it.

Also check out the rest of our Cuphead The Delicious Last Course content here.

Here’s a gameplay video by MonkeyKingHero or the Angel and Devil Secret Boss Fight in Cuphead DLC: