Cuphead The Delicious Last Course – How to Get The Divine Relic

To walk the path of the divine, you will need to endure the cursed path first 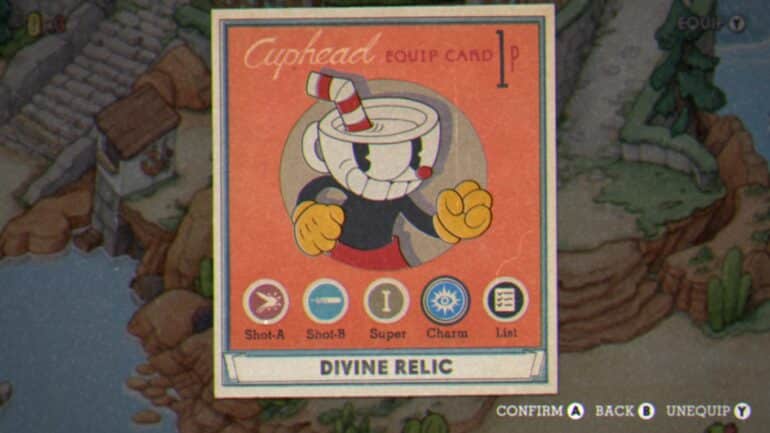 Secrets aren’t all that uncommon in Cuphead DLC. In fact, it is one of those things that make game even more unique and gives players more reason to stick around. From cute little Achievements to unlocking things like screen filters, there’s a challenge behind all of it… and the Divine Relic is no exception.

The Divine Relic is a secret charm that grants the player a variety of abilities. We’ll get to those in a bit. For now, let’s talk about the charm that starts us all into this rabbit hole.

The Broken Relic is an unassuming charm that can be bought from Porkgrind’s Emporium if you have the DLC. It only costs 1 coin and when equipped, it does nothing. But it does become something through a short quest.

The ghost by the graveyard gives the next clue to the quest. He points at a content of skill, a broken relic, and this eerie graveyard. To do this next step you’ll need to follow these steps exactly or else the puzzle may reset.

What you should do next is to talk to these 3 mountain climbers. Do note that their responses are unique to that save profile. This is the one we have in ours and it may be completely different from the one you have. But the order remains.

Starting from the one in first place, take note of the directions they are using. In our case, it is downright. Chances are it’ll be different. Others may have down, up, right, etc.

Notice the one in third (our third) is saying both up and left in their response. Take this as upper-left, instead of up and then left.

Now that you have all the information you need, head back to the graveyard and interact with the graves given in order.

This will open the portal to the secret Angel and Devil boss encounter.

If nothing seems to happen, don’t panic. Simply go back up to the competition up North and talk to the competitors again to reset the puzzle. And pay closer attention to their directional clues.

The Angel and Devil Fight

After solving the puzzle, the central headstone will start to glow. Upon interacting with it, it’ll ask you if you want to take a nap. If you say ‘yes’, this will start the boss fight.

Don’t forget to equip the Broken Relic before interacting with the central headstone.

After beating the boss, the Broken Relic will change to the Cursed Relic.

The Cursed Relic significantly weakens the wearer while they are wearing it. It also changes the background music of the overworld to “An Ominous Stroll”. The music goes back to normal if you change your charm.

While wearing the Cursed Relic, the player’s HP is reduced to one. In battle, the charm randomizes your bullets and charms when you stop shooting and when you dash.

Now the fun part begins, to upgrade the Cursed Relic to the Divine Relic, you need to defeat any 7 bosses from both the base game and the DLC.

Apparently, the Inkwell Hell minibosses also count. Check out JustoAllDay‘s video below to find out more.

In our case, we fought all the bosses from Inkwell I, including the plane battle. The eye slowly opens up the more bosses you defeat. It won’t start opening up instantly though. The first changes become visible after the second battle. Two markings will appear on the upper and lower part of the eye. The number of markings actually do not reflect the number of battle you’ve won. The second change (after 4 bosses) receives 6 markings while the third change (after 6 bosses) sees the icon change to 8 markings.

After beating the 7th and final boss, the Cursed Relic turns into the Divine Relic.

The Divine Relic no longer reduces your health to one. It will still randomize your bullets but it will have the benefits of the following other charms:

And finally, the overworld’s BGM is changed to “Joyous Promenade” while wearing it.

And that’s it for this guide. It won’t take you too long to get the Divine Relic. Especially if you choose the right set of bosses. It’s a fun little challenge and you can probably do it in one session. With the relic itself, it’s a good way to change up the typical boss fight routines. (Personally, I learned to appreciate the other bullets more because of this quest.) Well, go try it out. It’s more content.

Check out this gameplay video by Youtuber JustoAllDay where he shows us his way of unlocking the Divine Relic.