Babylon’s Fall – How to Change Classes

It's not exactly the most elegant of solutions 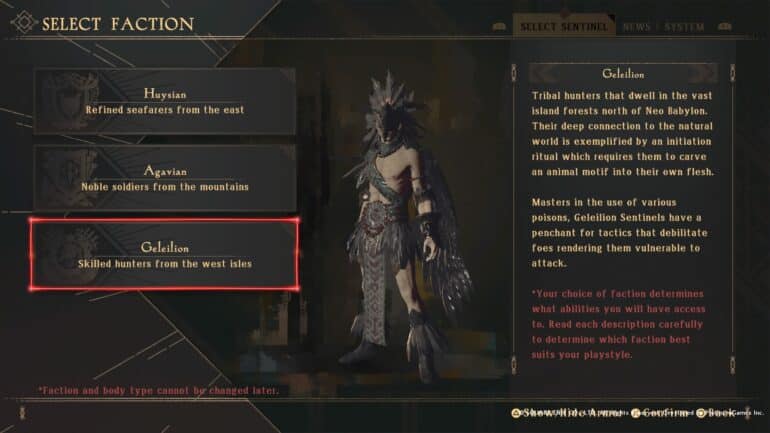 Babylon’s Fall Class systems allows you to play the game in one of three playstyles. What is considered classes in other games is called Faction in Babylon’s Fall. Each faction has a unique flavor when it comes to taking on monsters.

And it is for this reason that you may want to change up your fight style when the time comes. Thankfully, the game kind of allows you to switch classes at any time.

And without further ado, here’s our guide on how to change classes in Babylon’s Fall.

How to change classes in Babylon’s Fall

I mentioned earlier that the game sort of allows you to switch classes. Well, the answer is really yes and no depending on you look at it. Because technically we’re not changing classes like we’re swapping gear, we’re changing the sentinel we’re playing in the game.

Each of the factions in the game has unique traits that allow them to do things other factions cannot do.

The Huysian faction, for instance, are Sentinels who are both agile and aggressive. It is said that they are commonly seen launching themselves into enemy lines with terrifying speed. You can guess that this is the DPS class.

Agavian Sentinels are the tanks of the factions. They often serve as the vanguard of any offensive, drawing attention away with their shields and bashing enemies to death using large hammers.

As the support class, Geleilion Sentinels have access to various methods of creating poisons. It is said that they have a pension for tactics that weaken enemies’ constitutions, leaving the door wide open for allies to bring down the pain.

The character faction you choose ultimately determines the skill that you have access to throughout the game. You want to be on the frontlines all day and tank damage for the team, choose the Agavian faction. The same applies to the DPS-centric Huysian faction and the magic-centric Geleilion faction.

But what happens if you’ve already decided to create another Sentinel? Do you have to start again from scratch? On this, dear reader, I’ve got you covered.

The answer is, no. Whatever process you’ve made in the campaign, it is recorded and you don’t have to do everything all over again just because you’re playing as another faction.

On a final note, any class can use any weapon. It all depends on whether or not that weapon is available for use. You may be able to swap characters almost at will, you cannot, however, share equipment between your created characters.

It is kind of weird that this is how the game allows us to swap between classes. But once you’re used to it, then there really isn’t much issue to be had, other than keeping the inventory clutter-free. But let’s see how Square Enix handles it moving forward.

Also check out this helpful video by HDHaZmY if you want to learn more about Babylon’s Fall Classes and Weapons: