Turn Up!! The 5th Heisei Rider has come to Figure Rise Standard series 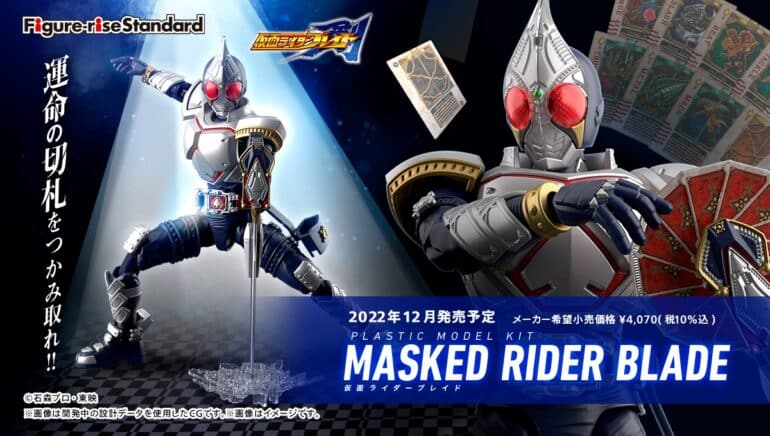 Another Heisei Rider has come to join Figure Rise Standard lineup. Joining the ranks of his fellow Heisei Rider brethren, Kamen Rider Blade will be coming out this December 2022 to complete the ranks.

In a Twitter post by BANDAI, they recently announced that Kamen Rider Blade will be released this coming December 2022 as a FIGURE RISE Standard kit. The kit will include not only parts for Kamen Rider Blade but also accessories such as his weapon, Blay Rouser, and his belt buckle, Blay Buckle. Not only that the figure also includes his own set of UNDEAD cards used in the TV series as well. Further details will be announced at a later date, but in the winter of 2022, it has been decided to commercialize effect parts that can reproduce the special move.

Who is Kamen Rider Blade?

Debuting as the 5th entry of the Heisei Era, the show premiered on January 25, 2004. Kamen Rider Blade is not only the 5th Heisei Rider but also the 14th rider of Kamen Rider series.

Ten thousand years ago, a massive battle royal known as the Battle Fight was fought by fifty-two demons known as the Undead, each representing a species fighting for dominance over all others. The winner was the Human Undead, known as Category Two of Hearts, giving dominion of the Earth to humanity. In the present day, archaeologists discover the sealed Undead, and accidentally set them free. Thus, a new Battle Fight begins.

Having developed the Rider System, based on the Joker’s ability to copy sealed Undead, the organization BOARD (Board Of Archaeological Research Department) equips two young men, who become Kamen Riders: Kazuma Kenzaki and Sakuya Tachibana fight together as Kamen Rider Blade and Kamen Rider Garren to protect humans from Undead and seal them. Also fighting Undead is the mysterious Chalice, a Kamen Rider whose purpose is unknown. In addition, a young man struggles to free himself from the control of the sealed Undead powering his own Undead-made Rider System, fighting as Kamen Rider Leangle.

You can watch the first episode on TOEI TOKUSATSU WORLD OFFICIAL‘s youtube channel: