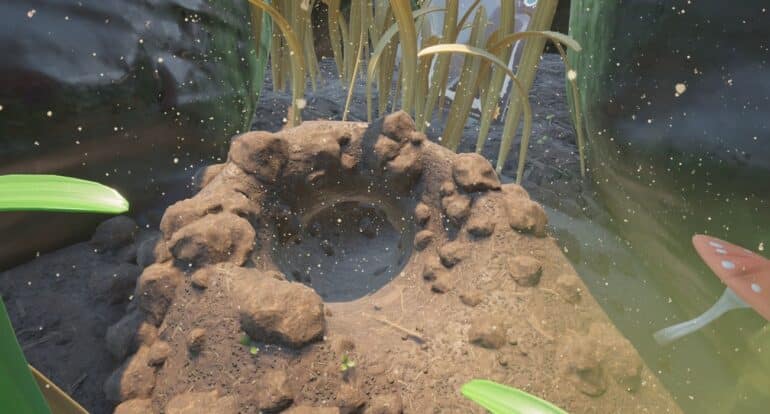 One of the toughest biomes is the Black Anthill Grounded biome. Not only is it guarded by the tough-as-nails black ants but there’s also the Sizzle debuff you have to watch out for. This guide will give you a walkthrough of the Black Anthill biome in Grounded.

The Black Anthill Grounded biome is the largest ant hill in the game. This special biome is home to unique resources like Style Nuggets and Tough Nuggets. Because of its dangerous creatures and large labyrinth structure, the developers have considered the Black Anthill to be a large dungeon.

The first thing you should know about Black Anthill is that it’s a biome with two entrances located to the southwest of the Backyard. One entrance by the Sandbox is filled with dangerous creatures and little protection from Sizzle and the other entrance by the Trash Heap is filled with Noxious gas. (See our complete Grounded Black Ant Hill Locations guide for more information)

Once you have the Gas Mask and Insect Axe, we recommend taking the Trash Heap entrance as it’s the path of least resistance. Here you can destroy the Rotten Food with your axe to stop the Noxious gas from being a pest. There’s plenty of cover from Sizzle but you can enter at nighttime to have a larger area to move around in.

You should pack up on as much splatburst as you can carry because the Black Anthill Grounded biome has large rocks that block progress. You can destroy them using this throwable.

Dealing With the Black Ant Soldiers

The Black Soldier Ants are the most plentiful enemies in this location. Though you will also encounter Black Worker Ants which aren’t as tough. We advise just avoiding them entirely and speeding through since you can easily outrun them.

If you really need to fight Black Soldier Ants, we advise using a weapon with Spicy as they’re weak to it. They also have a weak point in their eyes which provide bonus damage. Your best weapon here is the Spicy arrow because Black Soldier and Worker Ants are weak to stabbing damage which this arrow provides including Spicy damage.

With the right weapon set, most of the Black Soldier Ants can be dispatched. The problem is that there are plenty of them so you’re bound to run out of air fast. You’re better off just running past them.

Once you’ve proceeded deep enough into the Black Anthill Grounded biome, you’ll eventually find the lab. It’s being blocked by a large stone so you’ll need a splatburst to destroy it and enter.

The Black Anthill Lab is being patrolled by TAYZ.T robots which are hostile to you. There are also Black Soldier Ants in the lab which work with the robots to defend the area from your intrusion.

The TAYZ.T robots are also weak to Spicy, however, they are resistant to stabbing damage. Their biggest weakness is to burst damage which will put them down in a few good hits. They’ll take even more bonus damage if you manage to hit them from the back.

After unlocking the Sector A door, go back outside into the anthill again. Go through the Sector A door and jump down the hole. You’ll notice that there are Ominent lab beds in the middle of the room. Use these to set your respawn point in case you die so you won’t go all the way back outside again.

Once you’ve set your respawn point, grabbed the items in the room, and set yourself up, you can proceed to unlock the clearance to Sector B. There are a bunch of TAYZ.T robots guarding the computer to unlock it.

When you’ve unlocked Sector B, you can go back outside and look for the Sector B door which will lead to another large rock you have to blow up with splatburst. The path will take you up above and back into where we came from to unlock Sector A. There is a Resource Analyzer you can use to analyze anything you’ve collected in the Black Anthill Grounded biome.

Go back outside again and go through the Sector B door in the middle which will take you to the bottom. There are a bunch of computers on each side of the hallways below from the other side of the windows. After heading out the door, look to your left and you’ll find a Cracked Rock you can blow up with the splatburst. There will be another rock on the other side you’ll have to blow up again. This place isn’t necessary for progression but there are a bunch of rare resources to get like a Gold Molar.

After reaching deep enough into the lab, you’ll come across a large steel gate with a button. Press the button to gain access to the Observation Chamber. You’ll have to go to the lower right of the glass and use your splatburst to break the glass and enter. There’s a large computer in the far end of the room that when you activate it, it’ll trigger the defenses and the Assistant Manager with its TAYZ.T robots will come to attack you.

Watch out for the laser beams that the surrounding structure will activate midway during the boss fight. Hide behind the other pillars to avoid it or jump if the laser is low enough. Be careful not to stand too close to the structures that fire laser beams because it activates electricity that fries anything near.

After defeating the Assistant Manager, you’ll still have to worry about the traps which may activate the last time before the stage is clear. Once that’s done pick up the Assistant Manager keycard which grants you access to restricted locations in the Black Anthill Grounded biome.

That’s our Black Anthill Grounded Walkthrough. We hope you found this guide to be informative. Check out some of our other Grounded content.

This Youtube video from Jade PG shows a great guide for moving around the Black Anthill Grounded biome.