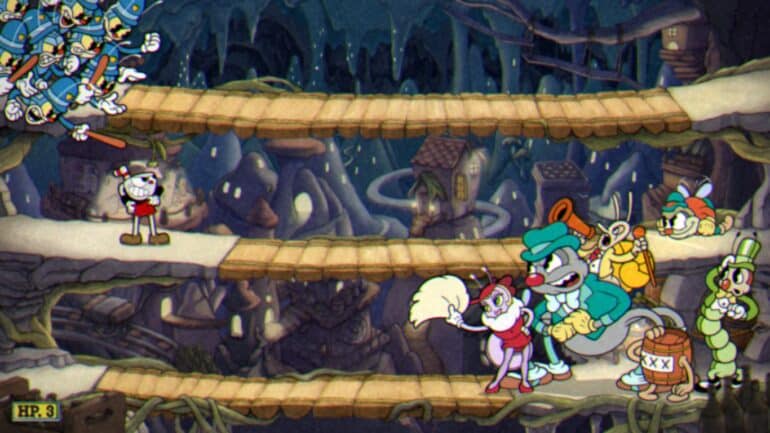 The Cuphead DLC Moonshine Mob Boss in the Bootlegger Boogie level is one of the first boss fights the player can face in the Delicious Last Course DLC. Your chosen cup will go up against the Moonshine Mob on the way to get some Distillery Dough from them.

These foes are broken up into 4 phases, which might be a bit challenging due to the amount of action on the screen. Although it may seem difficult at first, it becomes much easier once you have the correct tools at your disposal. As such, Here’s how you can beat the Bootlegger Boogie Moonshine Mob.

The arena is a three-tier vertical map layout where the player can freely go between the tiers. Enemies can come out from any of the 9 edges of the map. Enemies are also capable of entering the map from the background.

The first phase is against the Spider Mobster. The thing about him is that goes in and out of the map either to perform certain actions or run across the screen, steamrolling any cup unfortunate enough to be in his path. The isn’t exactly gunning to kill you with everything he’s got. He’s more annoyed you’re there in the first place.

Whenever the Spider Mobster calls in reinforcement, a bunch of bee thugs will enter the screen and take up positions before entering the arena. You don’t want to be in the same place that they are when they begin to enter the map. They do go down in a few hits, however.

Another random occurrence is the police wielding hand-pumped insect sprayers. The thing to take note of is the fact that they do not aim at the player. They aim for the spider mobster. So, that’s a little bit of relief.

One of the less frequent actions is the one where he walks carrying his caterpillar associate. The Spider Mobster will kick the caterpillar and he will bounce around the edges of the map. The mobster will ALWAYS kick the caterpillar upwards, so it is in your best interest to either keep your distance or be directly above/below him. Just watch out for the police bugs entering the map if you decide to do so.

You can destroy the caterpillar after hitting him with enough bullets. Be careful though, it’s tankier than it looks. Avoid getting pinched in a corner while traveling the edges and you should be good.

The thing about the web bombs is that there is just enough of a delay to their explosion if you keep moving. If you hesitate, even for a bit, you’re very likely to get hit by one of them. Although, you don’t want to waste your time triggering all of them. It’s still better to get the phase done and over with quickly.

The mobster won’t pay attention to you much. At most, he will walk across from edge to edge. Keep hitting him while evading everything on the map. It helps to be a little patient but do keep in mind that the longer the phase goes, the more elements you will have to evade.

The start of the second phase is marked by the spider’s fall from the map. In which case, he will rope the enemy for the phase, the Female Bug.

The main element of this phase, apart from the Female Bug herself, is the gramophone that shoots out in 6 directions.

The Female Bug is content with just dancing in the middle of the map. But she is the target you will need to hit to advance the phase. One of the things to keep note of is that she stays on the bridge. She will not move from there during the entirety of the phase.

From time to time, night stick-wielding bug cops and barrels will enter the scene from any of the 9 entry points. They are not hostile to the player but their crossing the map is bound to cause the player some problems.

The cops and barrels go down relatively easily, giving you a chance to keep all your focus on the Female Bug.

The thing about the gramophone playing is that it goes from either clockwise or counterclockwise. Your aim is to stay one step ahead to avoid damage.

It is worth noting that wave moves at almost the same speed as you do as you cross the map.

Keep shooting the Female Bug until she faints. That’s when the fights moves over to the next phase.

The third phase starts with the Anteater breaking into the arena. It will destroy the bridges in the process. The snail boss is shown for a brief amount of time, you can even damage him for a bit before the anteater covers him with his hat again.

The anteater will start poking the edges of the screen until settling on a point of attack. At which time, it will rapidly shoot its long tongue to the other side of the screen. The tongue is the only point you can do damage on the boss.

You have a brief window to hit its tongue before it withdraws, bringing along a bunch of thugs and cop bugs. You can duck underneath the tongue but the moment it returns, you will get hit if you remain in that spot.

It will almost immediately spit out a ball of bugs that’ll bounce around the arena similar to that of the caterpillar. You can even destroy like the caterpillar. I highly advise that since you don’t want to keep track of the ball of bugs on top of tracking where the anteater is going to attack.

No nasty surprises during this round other than the anteater choosing to forgo the poking stage altogether and suddenly stick out its tongue at a moment’s instance.

Keep repeating the loop until the anteater taps out.

As you can see from the picture above, even after you knock out the anteater, all is not as it seems. Yup, that is a fake-out. There is one small extra phase before actually closing out the fight.

If you were expecting the fight to end a while back, you would be forgiven if you took a hit from the snail boss. Quite cheeky of the game to have this trigger from out of nowhere. But then again, this is Cuphead we’re talking about.

To defeat this final boss, all you need to do is to dodge the attacks that are coming your way. It’s rather simple really. I guess it was relying on you letting your guard down the moment you saw “KNOCKOUT!” on the screen.

When you’ve brought down the snail, that’s when you can say that you have truly beaten this boss.

And your reward for beating this stage is a barrel of Distillery Dough! Plus a couple of sacks of Acme Flour and yeast.

All in all, not a truly challenging boss fight. It does have its moments, especially when you’re trying to learn the best way to outrun the constantly moving soundwaves. It is a very good opening fight to the DLC. That’s it, that’s all! See ya later!