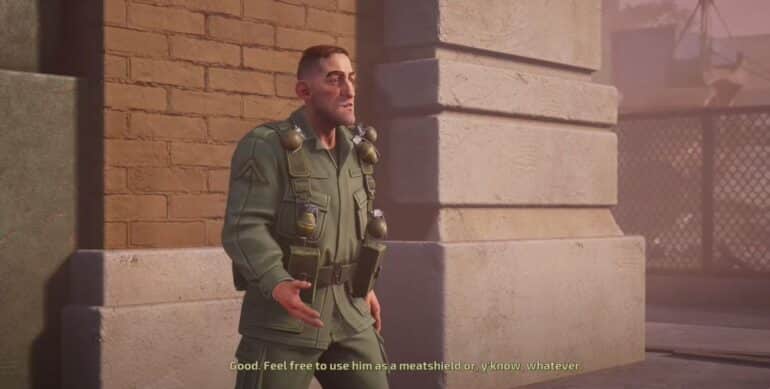 How to Complete Crypto Hired Gun Private Danza in Destroy All Humans 2 Reprobed?

To complete Crypto Hired Gun Private Danza you have to eliminate the target who’s been selling bazookas to the Soviets and is in possession of unflattering photos of a commanding officer. The great part is that this mission is relatively straightforward as his location is known from the get go. There are also optional objectives along the way which gives you more rewards upon completion.

It’s important to note that you first need to complete another Odd Job by the name of Ruined The Draft Dodger before this mission will unlock for you. You also need to use bodysnatch to get a soldier’s body before the quest giver will speak to you. Once you’ve fulfilled the requirements above, you can speak with the sergeant who’ll give you the details.

There are plenty of soldiers you can bodysnatch in the southwest side of Bay City. Though you’ll have to be careful not to cause an alarm. You’ll find the sergeant on the northeast side of the map beside a building on the front of the military base.

Private Danza is inside a heavily fortified military base. Of course the human tech is no match for Crypto’s sci-fi arsenal of weapons and you’ll make quick work of everyone there. However you’ll also get the optional objectives to destroy the smuggler’s defenses which will earn you extra Furotech Cells for your trouble.

Focus on your optional objective first before going after Danza. Ignore the soldiers and focus on the vehicles. A fast way to get rid of them is using the PK Slam or just picking up a soldier with Psychokinesis and throwing them at the vehicles. Shooting them with your gun also helps. Once you’ve gotten rid of them enough to fulfill the optional objectives, you can take out Private Danza.

Private Danza looks like everyone else in the military base. However he is marked on your map and you should be able to identify him easily. Eliminate him however you’d like and the Odd Job is done.

Check out this Youtube video from CJR Gaming who shows every Odd Job mission in the game.