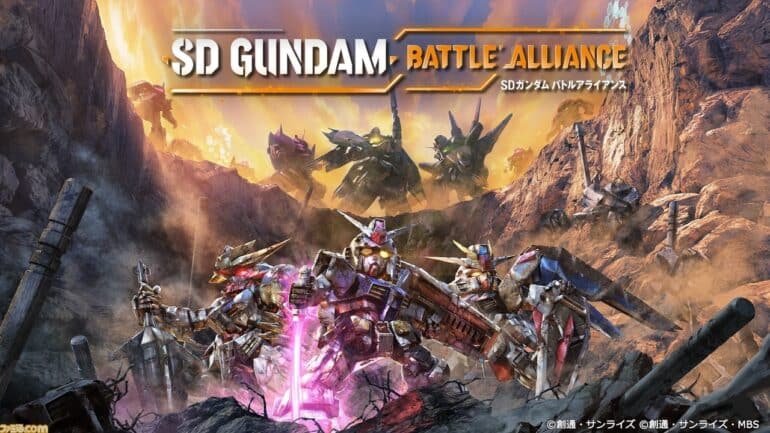 SD Gundam Battle Alliance is one of the upcoming new mecha anime games of BANDAI NAMCO. Fans of the Gundam series are delighted at the fact that the game’s bonuses will be available not only in Japan but also worldwide. With that, many including myself are wondering what other surprises BANDAI NAMCO has for us in this new Gundam-themed game.

Recently, new info and image scans of the game were recently revealed by BANDAI NAMCO about SD Gundam Battle Alliance. More info about the story, the gameplay, and more were revealed and will be shown in this article.

The story of “Gundam” drawn by “Break” and “True”

“Capture the “Break Mission” that has changed from the story of the “Gundam” work, and register the “True Mission”. Lead the story of “Gundam” to the official history.” In SD Gundam Battle Alliance, the timeline of the Gundam series has been altered. A perfect example of this unnatural occurrence is the duel of Amuro Ray and Ramba Ral. Out of nowhere, the Gouf, driven by Ral, goes into a state of frenzy and suddenly turns into Gundam Barabatos (6th form) and attacks the White Base. Defeating Barbatos will unlock “True Mission,” which allows you to relive the original famous scenes and games has appeared.

Strengthen the acquired Mobile Suits and go to the mission

Obtain blueprints for different Mobile Suits during missions and build & enhance your army of Mobile suits & move on to further missions. Enhance a mobile suit’s performance with “Capital” that can be obtained during missions. Wider range of enhancements such as improved armament performance by installing expansion parts.

Make A Party of 3 with Different Styles

There is a certain category called ROLL for each mobile Suit. Each fighting style is different, use it properly according to the situation and organization to capture the mission.

It has an overall well-balanced mobile suit performance such as fighting/shooting performance. Flexibility is the key to how to pilot this style.

Bio: A pilot belonging to the Earth Federation Forces “Moore Brotherhood” and the son of the former chief of Side 4 “Moore”. He has a freewheeling personality to listen to jazz in the cockpit, but his MS maneuvering skills are top-notch, and he rides on the Full Armor Gundam and charges into the battlefield.

Bio: A pilot belonging to the “Living Dead Division” of the Principality of Zeon. He has been a sniper since he lost both legs on the battlefield and is called the King of Shooting Down.

Bio: a test pilot of the Earth Federation Forces “G-4 Unit” and is in charge of adjusting the educational computer installed in the new type dedicated machine ” Gundam NT-1 ” commonly known as Alex. Nicknamed “Chris,” she has a gentle and gentle personality but is strong and responsible in military affairs.

Bio: He is a member of the Zeon Army Assault Mobile Army Special Forces “Cyclopes Corps” and is nicknamed “Misha”. Known for her unrivaled liquor lovers, she even brought her into her cockpit.

Bio: A boy who runs a junk shop in the old colony “Shangri-La” on Side 1. He accidentally repels Neo Zeon when he steals Z Gundam from Argama who entered Shangri-La and plans to make a lot of money.

Bio: A boy who lives in the village “Point Casarelia” in the mountains of Europe. At one point, he gets involved in a battle between the Zanskar Empire and the Resistance “League Militaire.”

Bio: A boy who had a fateful encounter with MS ” Gundam X ” and “Tiffa Adill” at a certain request while running a vulture in a devastated world . In the process of traveling with the crew of the vulture ship “Frieden”, he experiences various battles and grows up as a full-fledged pilot

Bio: MS pilot belonging to the Zaft Army. After finishing the battle with his best friend Kira, when he returned to Japan, he was transferred to the special task force “FAITH” and was given his state-of-the-art MS ” Justice Gundam “.

Bio: Gundam Meister of Celestial Being. He continues to fight against the rule of the world that “Ribbons Almark” is aiming for, and is awakened as a pure species innovator by the Twin Drive system of “00 Raiser”. He changed from the wrecked 00 Raiser to ” Gundam Exia Repair II ” and fought the final battle with Ribbons.

Bio: A pilot of the MS ” Gundam Barbatos Lupus “, feared under the name of “The Devil of the Tekkadan”. As a result of overworking the “Arai Yasushi System”, he loses the function of his right eye and right arm in the game against “Grey’s Ain” in Edmonton, and the function of his right half in the game against MA “Hashmal”. Still, he continued to fight for Olga’s true whereabouts.

Bio: Captain of the “08th MS Squadron”, a mechanized mixed battalion belonging to the Far Eastern Front. He is willing to cherish the lives of his companions above all because he lost his home family, and friends in a poisonous gas attack by the Zeon army during the military academy.

Bio: A young Gundam who appeared in Suda Doaka World, he has lost his memory other than his name being Gundam. He accidentally rescues Princess Frau of the Kingdom of Lacroix from the hands of the demons, and begins to act for the purpose of subduing the demon king Satan Gundam.

Bio: One of the “Seven Warriors”, the elite team of the Musha Gundam Corps, convened by the Musha Gundam when the evil warlords “Dark Army Corps” led by the Dark General invaded. He was the first to receive the title of “Samurai” and is the strongest warrior who excels in martial arts.

Bio: A mysterious Gundam that suddenly appeared in front of the Gundam Team on the continent of Magellan, which was full of people, after being defeated by the commander of the regular army of Zatalion, “Bloody Zaku”. He rehearsed the Gundam Team and formed the elite team “G-ARMS”.

Bio: A young man with a strong sense of justice who belongs to the self-defense force “Dragon’s Watch” in the Shu area where there are few attacks of “BUG” linked to Yellow Trinity. In order to save this world where Yellow Trinity is widespread, he decides to go on a journey and heads for the decisive battle of Rakuyo with many friends he meets along the way.

Bio: A leader who leads the distribution guild “Red Tiger” that runs various businesses. Many pledge allegiance to him because of his firm belief as a person who stands on top of those who take good care of his subordinates.

Bio: As the CEO of “Blue Wing Corporation”, he is a leader who leads the Wei area. From the fact that the energy called Trinity is starting to be depleted from the world, there are many BUGs around Rakuyo, and there is no depletion of Trinity, he starts a campaign to seize all Trinity around the continent.

Ikusei Frost Universe is the official theme song of the game and will be sung by the artist “Powerless feat. Shishi Gami” In 2009, Powerless started his activities as Vocaloid P under the name of Muryokup, and after repeatedly presenting his works, he was active as a composer at a game production company. After gaining a track record, he joined TOKYO LOGIC in 2019. Currently, while providing music for gekitomo music, TV commercials, games, etc. under another name, he also provides music for artists, anime character songs, and other songs under the name of Powerless.