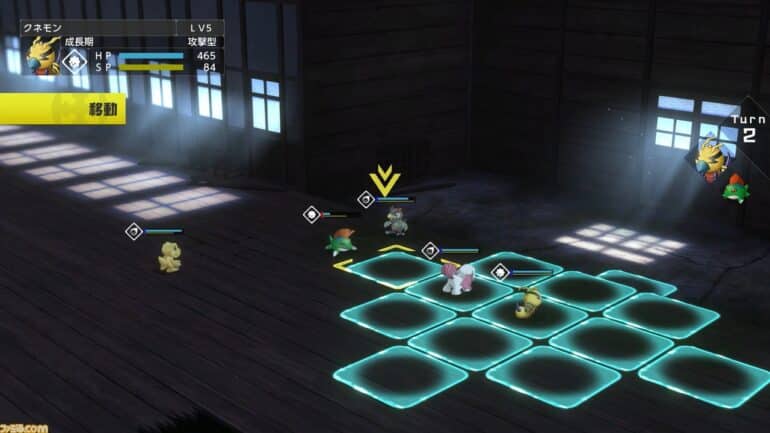 Nearing its release date, BANDAI NAMCO has released new details about Digimon Survive. Most of the details revealed are about new characters, the objective of what to do in Digimon Survive, and most importantly, the battle tactic system of the game.

A boy who was hiding in a school building in a different world. He’s quiet and shy, but a little mysterious and sometimes says he’s grown up. He is always by his sister, Miyuki, side and helping her. He shows hostility to anyone trying to harm his sister.

A girl who was hiding in a school building in a different world. She’s always dull and quieter than Haru. She says Haru has closed his heart because of her scary eyes. However, Miyuki sometimes sings as if she remembered him, and her voice is very beautiful.

As previously stated in past articles, Digimon Survive is a tactic game that uses turn base system. Frequently, players will be forced to battle and send up at least 10 Digimon of their own choosing.

The battle progresses on a turn-based basis, and the order of actions is determined by the quickness of the unit. When it comes to the action order of a player’s unit, select the best action with the command system.

The map of the battlefield will be very tricky as each environment, terrain and location will greatly affect the type of battle players will face. Carefully choosing which among the Digimons that players have is a must and they will either have advantages or disadvantages depending on the setting.

When the unit’s turn comes, you can move it according to the squares of the field with the command “Move“. The distance traveled and the climbing power of the height difference differ for each monster. If there is an enemy within the attack range, you can “attack“. The attack range varies depending on the technique. The number of damage changes depending on the directional factors such as flanking and back attacks, the height difference, the compatibility of the monster type (data, virus & vaccine), and the compatibility of the attack attributes (flame, water, wind, earth, light & darkness)

Enhancing the performance of a Digimon can be done through the use of the SP gauge. Using this gauge, Digimon can not only evolve in battle but they can unlock new powerful moves suited to their playstyle. However, when using the SP gauge, especially during evolution, it takes time to recover SP so management of the gauge is important, and stocking up on recovery items will be necessary for future challenging missions in the game.