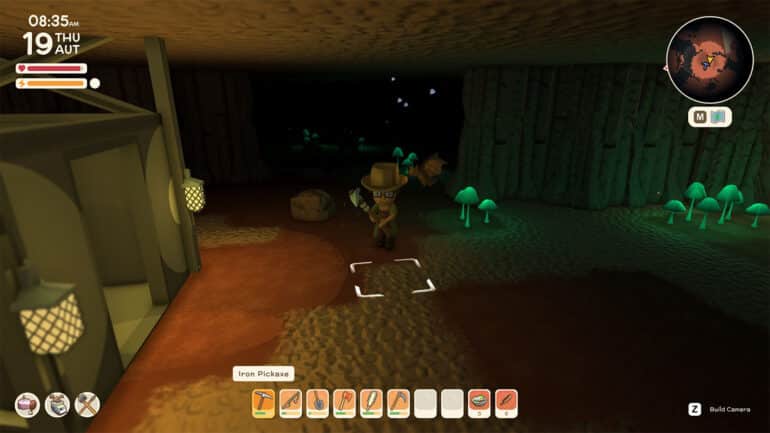 The Deep Mine is an area accessible by players in Dinkum where lots of things can be found, including ores, gemstones, and even valuable treasure. However, venturing into the mines should be done with proper preparation and utmost caution as it is also inhabited by dangerous creatures.

In this guide, we will talk about the Deep Mine, how to unlock and build one, and how to prepare for trip in its caves.

How to unlock the Deep Mine in Dinkum

To unlock the Deep Mine, you will first have to get your Deep Mining License from Fletch for 3,500 Permit Points, which becomes available right after getting your Mining License. Aside from the Deep Mine, the license will also allow you to buy a Mine Pass from John’s Goods for 25,000 Dinks.

Once you have unlocked the Deep Mine, talk to Fletch once again and accept the deed to build a Deep Mine in your town. The construction of the mine will put the town in debt of 250,000 Dinks and will need the following materials:

The mineshaft will have to be built on a 3x3 flat ground and it takes 1 full day for the construction to be completed as soon as all the necessary materials have been deposited.

How to prepare for the Deep Mine

Before heading down into the mines, you must first prepare a couple of things in order for your trip to be productive and safe.

A Mine Pass is needed to use the elevator to descend into the mines. You can buy and hold several Mine Passes from John’s Goods, but there’s only one pass sold per day.

Once you have a pass, make sure that you have everything prepared before you use it since it is considered as a consumable. A pass is immediately consumed if you interact with the elevator panel and go down to the mines. You’ll have to use another pass if you decide to go back down again, even if both trips are done within the same day.

There are lots of things that can be obtained while inside the Deep Mine, so it’s best that you only bring the essentials listed further below so that you’ll have enough space in your inventory for your loot. It also helps if you have your Cargo License upgraded for more inventory slots.

You’ll easily drain your stamina while down in the mines, especially if you are mining for ores, so it’s best to stock up on food. If you have access to Corn and Meat, chowing down on some Dagwood Dog before anything else is a cheap and easy way to get a temporary stamina meter boost. Lamington is also a good alternative as it gives a Mining boost, plus some added Defense from creature attacks.

You probably have gathered a bunch of Old Keys from breaking drum barrels or from metal detecting. These keys are useful in the Deep Mine since there are some rooms that you can find within the caves that have locked gates which you can use the keys on. Behind these gates are chests that are filled with resources and rare materials that you can only find in these places, such as the Collar.

So far, these rooms usually have two locked gates barring its only entrance, so make sure o bring around 6-10 keys per trip.

Bring both the Wooden Torches and the electric one that you can buy from John’s Goods. Wooden Torches provide some ample lighting in the dark mines and is also useful for finding your way back to the elevator if you are not too keen on using the minimap. As for the Torch, it can also be used as a light source, but it’s most useful at blinding and stunning creatures to make a quick escape.

Later on, you will be able to get a Miner’s Hat which provides light, but it has to be charged. There is also the most coveted Candle Hat that can be obtained within the Deep Mine; this hat does not need charging and since it is a hat, you don’t need to hold it with your hands.

Bring at least two to three Pickaxes if you plan to mine ores underground as there will be plenty of nodes to break down.

There are a bunch of animals that are living underground and all of them are hostile towards anyone who come near them, so it’s best to know how to spot them so that you can survive encounters.

There are Bats that fly quickly and dive on you to attack, causing minimal damage. They die by striking them once with any weapon or tool that does damage. They sometimes drop Bat Wings.

There are also Bush Devils that roam the mines. These are similar to the Bush Devils in the overworld that can lunge and bite at you, and even spit fireballs at you.

And last, but not the least, there are Glowing Crocos that live in the mines. These are cousins to the common Croco, but they have adapted to living in a dark place by letting glowing mushrooms grow on their backs. They can lunge and bite at you, and they have a their own poison cloud attack where they let you a puff of smoke around them that lingers for a few seconds. Getting caught within the cloud will get you poisoned.

It’s also important to being a weapon or two if you plan to hunt these animals or just defend yourself from them.

Within the Deep Mine, you’ll sometimes find a node with red crystals. Breaking this node will drop a huge Ruby which you can carry on top of your head. Once you find one, try to bring it back immediately inside the elevator so that you won’t forget about it before exploring the mines some more.

You can find multiple of these rubies if you are lucky, and they fetch from somewhere around 50,000 to 80,000 Dinks if you sell them at John’s Goods. Just make sure to load them in the elevator before going back up.

Check out this video by The Ginger Empire showing an exploration of the Deep Mine: