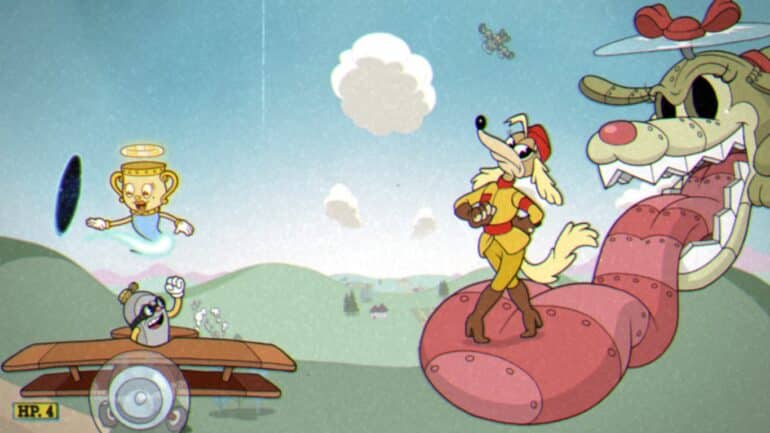 In Cuphead DLC, the Howling Aces boss in the Doggone Dogfight level is a multi-stage fight in the middle of the air. Movement is restricted to the airplane that we are on. It is being flown by the same person who taught us about airplanes in the base game. Nice fella.

This fight is split into 3 phases, which might be a bit challenging due to the amount of action on the screen. Although it may seem difficult at first, it becomes much easier once you have the correct tools at your disposal. As such, Here’s how you can beat the Doggone Dogfight The Howling Aces boss.

You only have the upper half of the biplane to work with. So, movement is somewhat restricted.

Because of the restricted playing field, you’ll have to time your jumps and ducks to avoid the Bulldog’s attacks while moving left and right to avoid the tennis balls coming from the bomber itself.

You may want to watch out for the fire hydrant missiles. They may be slow-moving but they do the job of pulling your attention away from more immediate threats. They can be destroyed with a single bullet.

The thing you’ll need to keep in mind at all times is your position relative to all the attacks being thrown your way. If you pay too much attention to the bulldog, the tennis balls will get you and vice versa.

Personally, I avoid being directly below the path of a potential tennis ball attack while reacting to the bulldog’s attacks, which come in two forms – the cat gun and the tattoo boomerang attack. Both of them are quick to tell.

As shown in the picture at the top, the bulldog will use the cat to launch 3 multicolored yarn balls at your position. You can simply duck to avoid damage, just keep in mind the falling tennis balls.

The other attack is when he parachutes down and launches 3 crossbones in succession. They are boomerangs in nature so watch your back as they always come back. It is also worth noting that there is guaranteed pink crossbones during the attack. Though there is a low chance of two pink crossbones spawning.

If you have tracking bullets, it may be worth pointing in the direction of any incoming missiles. They’re not too hard to dodge but it’s better that they’re not there at all.

Your target throughout this fight is the Bulldog. Deal enough damage to make the bomber explode and enter the next phase.

The second phase sees the bomber going down, leaving you to deal with the remaining crew. This is probably the easiest part of the entire fight. If you have a tracking bullet, it will a long way in mitigating a lot of their constant moving around.

This phase of more a test of your own tracking abilities than it is about the dogs. If you have tracking bullets, by all means, do so. They go down pretty quick and the only way you can get hit is if you get careless and accidentally land on a bad spot.

If you test yourself and use more gimmicky bullets, feel free to challenge yourself.

The phase keeps going until all the dogs are defeated and the Howling Aces CO flies in and into the scene.

In this final stage, you and your pilot are in the clutches of the Aces’ officer. You won’t have a chance to deal damage until you survive the first phase… which includes lasers.

The final phase is a two-stage looping endurance match where the only time you can deal damage is when the CO is open herself up to attack.

The endurance stage sees you dodge lasers. There is a brief period of time before they fire, leaving you with barely a couple of seconds to adjust. This will go one for three-round, with the final round always being a pink laser that you use to build up your Supers.

After surviving the lasers, the aircraft’s mouth will open up, allowing you to do damage to the CO. On her part, she will launch dog bowls at you in rapid succession. There is a clear pattern to their behavior, so you have that going for you. The red ones always go for your feet, while the yellow ones go for your head.

While it is easy to say that you should duck the yellow bowls and jump over the red ones, they are being shot in rapid succession. Sometimes you won’t have the luxury of doing either action at a time. You may find yourself jumping wilding simply to avoid them.

As you can see from the pictures above, this match can get screwy with you. More often than not, the screen will shift in ways that go against your sense of direction. Basically, your controls will be the same but your perspective and sense of direction are messed up.

This is might be why the majority of the fight was kind of easy leading up to this climax. It’s one heck of a mind trip, that’s for sure.

Tracking bullets helped me out during the entire fight, so you might want to keep that in mind. And since the boss is directly “above” you, this is a great chance for Ms. Chalice’s Super I to deal lots of damage to her.

The fight should be over after going through the loop twice or even thrice. Don’t be discouraged if it goes on longer than that. You’re still alive, which means you still have a shot at finishing the stage.

And your reward for beating this boss fight is a bowl of Pineapple Mint!

This is one of the more chill boss fights in the DLC (up until the end). Sure, it is as challenging as any other boss fight, but you can say that it is challenging for different reasons. Especially when it comes to the final phase and its inverted view. Regardless, it was a memorable fight. That’s it, that’s all! See ya later!