A guide on how to defeat Malenia, Blade of Miquella in Elden Ring. 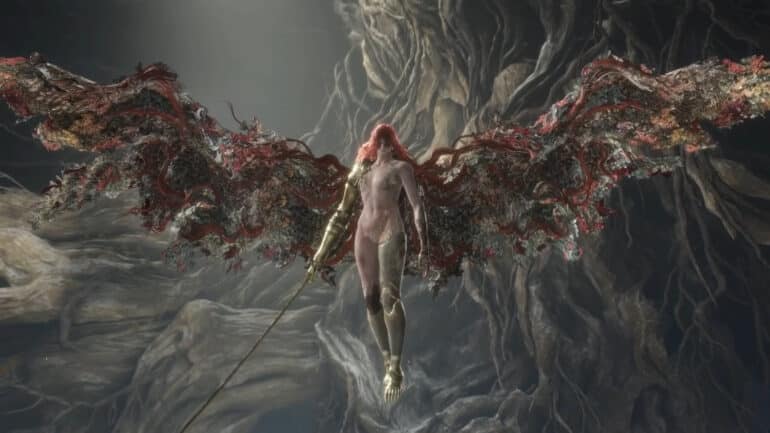 Malenia, Blade of Miquella is one of the bosses that can be fought in Elden Ring. Being born as an Empyrean along with her twin brother, Miquella, Malenia is considered to be the strongest and most challenging boss in the game. She has been cursed by the Scarlet Rot since birth, but despite that, she became a fierce and skilled warrior who has never known defeat.

In this guide, we will talk about the fight against Malenia, look into her attacks and moves, and share some tips that will help defeat her.

Who is Malenia, Blade of Miquella?

Malenia is an Empyrean who was born from the union of Queen Marika and Radagon, and ever since their birth, she and her twin brother Miquella were inflicted with curses. Malenia harbored the Scarlet Rot within her which slowly eats her from the inside, while Miquella was cursed to forever remain a child.

As Miquella was looking for a way to cure her Scarlet Rot, he outfitted Malenia with unalloyed gold to help prevent the rot from spreading. During this time up until Miquella placed himself inside the Haligtree, Malenia became his own protector, hence her title.

Malenia is also known as the one who almost brought down General Radahn and the one who gave him the Scarlet Rot. According to the lore on the Scarlet Aeonia incantation, Malenia only needed to bloom a third time to become a goddess, which is what she does in the fight against the Tarnished.

How to Unlock the Malenia Boss Fight

The entire region of the Haligtree is considered as an optional region and going through it is not required to reach one of the endings of the game. Despite that, the region can still be explored and Malenia can be fought and defeated prior to reaching an ending and completing a playthrough.

How to Defeat Malenia, Blade of Miquella in Elden Ring

Malenia’s fight is split into two phases. In the first phase, she will be dishing out swift attacks using her blade, while in the second phase, she will bloom into her final Goddess of Rot form where she will be doing the same phase 1 attacks mixed with some flying or hovering special attacks, plus her signature attack known as the Scarlet Aeonia.

Players will need to be careful when trading blows with Malenia as she has an active healing that heals her for around 350 HP per hit on both connected and blocked attacks. She will start inflicting Scarlet Rot on some of her attacks in phase 2.

Malenia’s main weapon is her blade that is attached to her right prosthetic arm. It has a long reach and she can swing it around in in quick successions, sometimes chaining it with further combos depending on how close you are to her. It is important to limit your attacks to 1 or 2 hits as becoming greedy and trying to do more hits will put you at risk of getting hit which she can also heal from.

Malenia will spin towards her left while jumping in the air, swinging her blade towards you as she completes her spin.

Malenia has little to no poise in most of her attacks and this is one of her attacks that you can interrupt with weapons that are great that breaking poise such as greatswords and longswords. Timing it right, you can land one swing, and depending on whether she gets staggered or not, you can follow up with another swing before pulling back.

Malenia will do wide swings of her blade towards you.

This attack is telegraphed by Malenia when she winds her blade back with her arm stretched. Once you see this, simply roll away from her. She can also do a swing towards you as she strafes towards the side.

Malenia extends her blade to the side as she charges at you and swings her blade three times, followed by another wide swing towards your direction.

For this attack, roll towards her as she charges towards you, and then immediately roll away from her to avoid the follow up swing. Pay attention to the beginning animation of this attack as it has a variation.

If sparks appeared on her hand as she winds up for the flurry, it’s better to just follow the roll to avoid getting hit. If there are no sparks, you can punish her after the follow up swing with a single attack.

Malenia will jump in the air and do a spinning kick with her leg.

This attack as the same tell as her Spinning Sword Swing, except with the Leg Kick, she holds her blade close to her back as compared to holding her hand stretched out. This attack is known to have a hyperarmor, so you cannot stagger her mid-kick. She can be punished after this attack, but it’s only safe if you are right beside her as she does the kick.

Malenia will jump in the air and wind her sword with its tip forward. She will then thrusts the sword towards your position in an attempt to stab.

With this attack, you would want to roll backwards her as she comes down for the stab to close the gap and punish for some hits as soon as she lands.

One of Malenia’s signature attacks, she will jump and hover in the air while having her sword over her left shoulder. She will then land while wildly dishing out flurries of swings in quick succession while moving around and over you.

For this attack, melee attackers are recommended to wield a shield that can withstand heavy and multiple attacks or just simply move away from where the attack is happening, while ranged attackers will have to keep a good enough distance while still paying attention to dodge a couple of this attack’s hits.

This attack can be broken down into four phases. The first phase is her flurry as she comes down from her jump. The second phase is a shorter combo of flurries. The third phase is where she jumps in the air while still swinging and does a small U-turn as she lands and winds down her attack. The fourth phase is a delayed burst of slashes that happens despite her not moving anymore.

The first phase can be tanked by a good shield and a chunk of stamina, followed by two rolls towards her left side as she does the second phase, then move away from her as she ends the attack by heading to your southwest when facing her.

Malenia enters her phase 2 once her HP is fully depleted in phase 1. There will be a cutscene where she transforms into her Goddess of Rot in which where she gains wings. At the start of the fight, she will dive down on your location and perform her Scarlet Aeonia bloom. Avoid getting hit by the impact and do not approach her while you still see petals from her bloom to avoid getting the Scarlet Rot.

Most of her attacks in phase 2 are similar or varied versions of her phase 1 attacks.

Similar to the Spinning Sword Swing, she spins up in the air and slams her sword downwards. A delayed blast of rot will burst from the spot where her blade hit.

If she does this attack on its own, you can roll towards her back to avoid the hit and the rot, and then land some few hits as she recovers. She can do this attack as a follow up to her flurries, in this case it is better to stay clear from her hit instead.

Similar to her Leg Kick in phase 1, except that she can also do a kick with her left leg as well.

Malenia flies up with her wings pointed downwards. She will then dive towards your direction with her blade arm stretched wide. As she lands, she will turn to your direction and immediately follow up with a sword thrust to stab.

For this attack, be ready to avoid the diving swing, and as soon as she lands and goes for the stab, roll away from her to close the gap and follow with a hit.

Malenia flies high and glows for a bit before summoning mirages of herself at you. She will do this four times and finishes the attack by diving at you.

Malenia will fly up as orange petals start appearing from her back. She will then dive down near your location and start blooming. The bloom explodes, sending out rot to its close proximity as the petals slowly dissipate.

Approaching her with most of the petals still visible will result in a quick uptick of Scarlet Rot, possibly filling it up right away. To still be able to land a hit or two while Malenia is recovering from this attack, wait until you only see around one or two petals as you will only get a couple of rot ticks from these.

Range attackers should take the opportunity to dish out heavy attacks at this point, while melee attackers can either wait it out or use long range incantations such as the Black Flame or Frenzied Burst.

Defeating Malenia will reward you with the following:

Her Scarlet Aeonia incantation and Hand of Malenia katana can be received from Enia at the Roundtable Hold in exchange for her Remembrance.

Check out this video by SweetJohnnyCage – Narrated Guides & Walkthroughs that shows how to defeat Malenia: