An guide on the top incantations to get in Elden Ring. 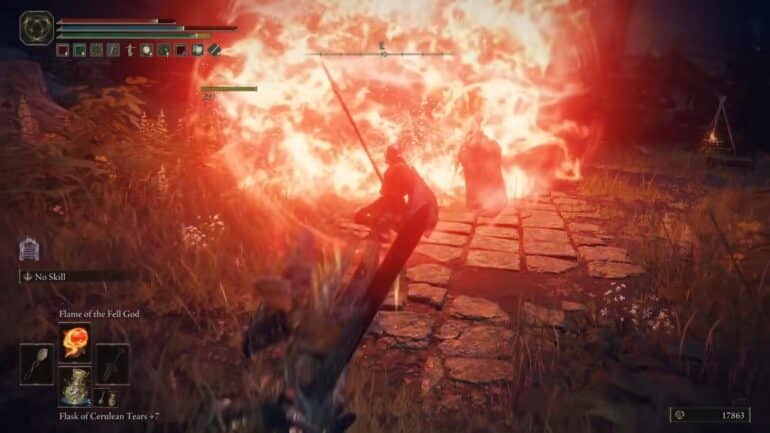 There are plenty of Incantations that Tarnished players can dish out in Elden Ring, and depending on your build and how far you’ve progressed into the game, you can only use so much at a time. So with that, we’ve compiled a list of the best Elden Ring Incantations you can get in the game to help you decide which ones to try out and eventually incorporate into your build.

In this guide, we will be listing down what we think are the best Incantations in Elden Ring to obtain, how or where to get them, and their respective required stats to be able to use them. We’ll start off with the utility incantations, and then move to the offensive incantations.

Here are our Top 25 Best Incantations in Elden Ring:

Flame, Cleanse Me is one handy utility incantation to have at all times due to its ability to alleviate poison and scarlet rot buildup and cure them as well.

Assassin’s Approach is very helpful for those Tarnished who want to keep it silent and stay undetected. It also reduces fall damage.

The Assassin’s Approach is also the starting incantation for the Confessor class.

The Erdtree Heal is one of the strongest healing incantations that you can chant. Due to its high FP cost and its high Faith requirement, you may opt to go for the lesser heals at first, but eventually getting the Erdtree Heal gives you the most healing per FP and per cast.

Protection of the Erdtree

The Protection of the Erdtree gives you an increased damage negation for all affinities except for physical. It lasts for 70 seconds upon casting. Holding the chant only delays the application of its effect and does not enhance nor prolong its duration.

The Stone of Gurranq is an incantation that deals physical damage. It is quite a challenging one to master, however its high stagger rate is worth the effort.

The Wrath of Gold provides a defensive crowd control move which knocks back surrounding foes. Charging it increases its shockwave, though timing is needed not to get interrupted or knocked back yourself.

The Bloodflame Blade is a good incantation to have if you want to start getting into a Bleed or Hemorrhage build. It works best on fast weapons to quickly build up the bleed meter, and it also stacks up on weapons that already inflict the Hemorrhage effect.

Swarm of Flies is also a good a good alternative to inflicting bleed to unsuspecting victims. It can be chanted at a distance and it causes a good bleed buildup. It works best in tandem with a bleed weapon as a way to initiate an attack.

The Death Lightning brings down lightning strikes that inflict the death blight to those caught in it. If used in PvP, the death mist offers a temporary barrier from player attacks, giving you some time to recover or reposition.

Also an incantation channeling the power of the Lichdragon, Fortissax’s Lightning Spear summons two lightning spears on top of your head and thrusts them to the ground. Upon impact, they burst and deal AoE lightning damage.

Agheel’s Flame lets you channel the flame breath of Agheel. It can be charged to extend its duration and it can also be used while jumping.

As of this writing, having your talisman equipped on your right hand allows you to chant the incantation multiple times while jumping; equipping the talisman on the left hand only allows you to chant it once. Without jumping and having the talisman on the right or left hand, you can only chant it once at a time. This may be a bug that may be patched out in a future update. It also applied to the other dragon incantations.

Ekzykes’s Decay lets you belch out a thick fog of scarlet rot. It can be charged to extend its duration and can also be chanted mid jump.

Placidusax’s Ruin has two phases, the first phase is an explosion that deals lightning damage, and the second phase lets you shoot out golden breath. Chanted as it is, the bean will sweeps from side to side, but it can be controlled via directional movement. This allows to limit the beam to shoot out and aim on a specific spot.

Theodorix’s Magma lets you spew molten lava on the ground. The lava puddles linger for a few moments, dealing damage to those who step on them. It does not charge up, but it allows an immediate follow-up attack.

Greyoll’s Roar channels the immense roar of Elder Dragon Greyoll causing massive damage to those who are nearby. It has quite a big FP and stamina requirement, which translates to an equally large amount of damage. Enemies who get near the damage area mid-roar will still get the full damage.

Lansseax’s Glaive summons a huge glaive that does a sweep attack once, followed by an AoE attack that rolls forward from the sweep. Great for clearing a bunch of enemies in a wide area.

Aspects of the Crucible: Tail

Aspects of the Crucible: Tail give you a huge tail which you then use for a quick tail whip. Chanting the incantation will allow you to do a single quick tail whip, while charging it will add another wider tail whip.

The Black Flame Ritual summons a ring of black flame around you. Charging the incantation increases the ring’s size. Chanting multiple black flames can effectively stagger-lock most small enemies, and can even reliably stagger a minor or field boss.

Elden Stars summons a golden star that homes in on a single enemy while shooting out dozens of smaller stars that also home in towards the same enemy. The smaller stars can break the enemy’s poise due to its high posture damage and sheer number of hits, while the main star explodes after a few moments of touching the enemy it locked on, causing massive damage.

Follow the cave while hugging the left wall and you will eventually end up at another cave opening on the side of the cliff. On the edge of the opening is a corpse which holds the Elden Stars incantation.

Flame of the Fell God

Flame of the Fell God lets you summon a ball of fire that homes in on an enemy. Once it reaches the enemy, it explodes, dealing massive damage and setting the ground aflame for a few moments. Enemies walking through the flame will get tick damage.

The fireball will only travel a short distance before it momentarily stops and explodes. To account for this, if the enemy is too fast for the fireball, dodge towards the enemy to help the fireball catch up once it is about to explode.

Frenzied Burst allows you to shoot out a concentrated blast of the flame of frenzy from your eye. It can be charged to make it stronger, enough to break the guard of most enemies. It’s a good incantation to use to snipe enemies from a distance, especially ones that wield shields.

The Unendurable Frenzy makes you shoot out multiple bursts of the flame of frenzy from your eye. Using it as it is will shoot out these bursts towards and area, followed up by another burst of flames that will drop around you in random spots. Charging this allows you to use an aim it longer until your FP drains out.

Because of how potent this incantation is, it is recommended to have a high enough Focus to prevent yourself from succumbing to Madness quickly by putting at least 40 points to Mind and equipping gear that provides additional bonus to Focus.

Radagon‘s Ring of Light casts a ring of light around you the expands quickly and damages enemies that surround you. It can take a moment to chant it, but the damage it deals is quite significant, so proper timing should be observed.

Triple Rings of Light lets you shoot out three rings of light; one directly in front of you, two on a diagonal angle on both sides. These rings will return back to you after a few moments like a boomerang. Multiple sets of rings can be cast repeatedly, provided that you have the FP.

Scarlet Aeonia is Malenia’s signature move where you conjure a huge scarlet blossom that explodes and deals scarlet rot to nearby enemies. This is one of the most challenging incantations to obtain as it requires defeating Malenia. It has a high FP requirement and also requires three memory slots to keep. Recommended to pair with Ekzykes’s Decay or Rotten Breath to quickly proc the rot.

Check out this video by Garden of Eyes that showcase all the incantations in Elden Ring: