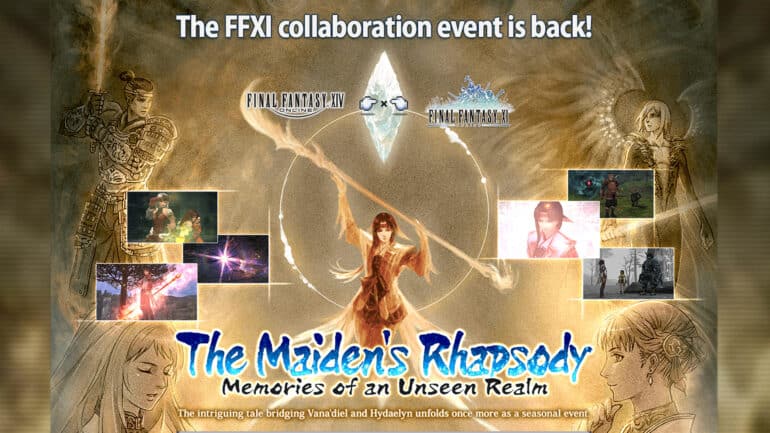 Final Fantasy FFXIV: Maiden’s Rhapsody is a seasonal event that features an FFXI Crossover and is once again going to have a re-run soon. This is a crossover event with Final Fantasy XI where a certain character from that story will need your help. Clearing this quest will reward you with an armor set that any character class can wear.

In this guide, we will look into the steps on how to complete the Maiden’s Rhapsody event to get the special armor set.

How to Join the FFXIV Maiden’s Rhapsody event

To participate in the Maiden’s Rhapsody event, you will first have to visit Remumu over at the Drowning Wench at Limsa Lominsa Upper Decks. She will then give you the A Journey to Remember quest which is the main quest for this event.

Remumu can be found inside the Drowning Wench at coordinates X:11.6 Y:11.2.

How to Complete the A Journey to Remember quest

Talk to Remumu at the Drowning Wench

This will start the quest as she will ask you to accompany her as she does her investigation. She will then tell you to meet up with her at Costa del Sol.

Participate in the FATE: Our Favorite Pastime

You will then meet Iroha and she will request for your help for her training. You will then have to participate in the FATE: Our Favorite Pastime as she tries to defeat Robber Crabs. Return to Limsa Lominsa, talk to Iroha and show her the strange stone to complete this chapter.

Participate in the FATE: The Way of the Samurai

Iroha will then require your assistance in another activity. You will then have to participate in the FATE: The Way of the Samurai which is located at Central Shroud, just outside of Haukke Manor. Defeat the enemies in the FATE with Iroha and then meet her at New Gridania to show her the strange stone to complete this chapter.

Participate in the FATE: Serket Breaker

Iroha will once again require your assistance in another activity. Tou will then have to participate in the FATE: Serket Breaker where you will have to defeat the boss Serket at the Segolii Desert in Southern Thanalan. Once you defeat this boss, head to the Adventurer’s Guild in Ul’dah to talk to Iroha and show her the strange stone to complete this chapter.

Participate in the FATE: The Key to Amatsu Kyori

Finally, Iroha will ask you to help her in testing her technique against the Dread Dragon. Participate in the FATE: The Key to Amatsu Kyori which is located at Upper La Noscea and fight the boss. Once it has been defeated, return to Limsa Lominsa and talk to Iroha once again.

Once the dialogue with Iroha is done, report back to Remumu and she will reward you with the Amatsu Set and you will also get the Heaven Eleven achievement.

The Amatsu Set is an armor set that is the same armor set that Iroha wears. Any player class can wear this set. However, it is not dyeable so it only retains its red and white base colors. It is comprised by the following:

Can I still get the Amatsu Set even if I have already received one from a previous Maiden’s Rhapsody event run?

On a related note, if you have started this quest in its past run and did not complete it, you can participate in this quest again and just pick up from where you left off. You will still be able to receive the Amatsu Set in this case.

If you like this Guide, be sure to check out our other Final Fantasy XIV articles here:

Check out this video by Meoni showing how to complete the Maiden’s Rhapsody event: