A young detective from the Tenryou Commission makes his way to Genshin Impact. What does imaginative young man have to offer? 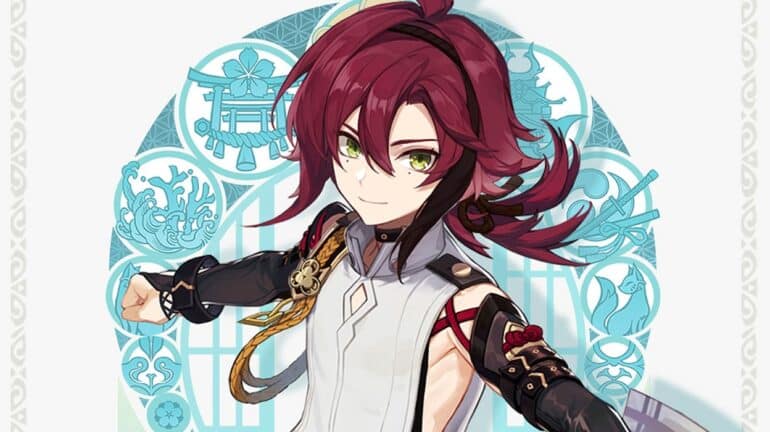 Genshin Impact Shikanoin Heizou is the latest character to be joining the colorful cast of playable characters. This young detective is bent on solving the mysteries of Teyvat using his intuition and imagination. But who is Genshin Impact’s Heizou and what is he capable of?

Who is Shikanoin Heizou in Genshin Impact?

Shikanoin Heizou is a four-star character hailing from the nation of Inazuma. Heizou is an Anemo vision user who uses his Catalyst weapon to cast elemental damage enhanced by his martial arts.

Unlike other Catalyst weapon users, Heizou uses his weapon up close instead of dealing elemental damage from a distance. He is also the first male Catalyst user in Genshin Impact. Heizou’s birthday is on July 24.

Shikanoin Heizou is a young man who works a detective for the Tenryou Commission. According to Hayasaka Ayato, he is a man of great insight and admirable wit despite his uncouth personality. His capabilities as a detective has earned him worldwide recognition around the world of Teyvat.

The Tenryou Commission acknowledges Shikanoin Heizou as the undisputed best detective of the organization. His deductive reasoning and ability to solve cases have impressed many. There are those who would compare Heizou’s skills to that of a god.

The leader of the Tenryou Commission, Koujou Sara, has expressed her dislike of him. But is so far willing to tolerate his attitude to the fact that Shikanoin Heizou brings in results for the Organization.

Read our Genshin Impact Shikanoin is the New Character Revealed for more information.

Shikanoin Heizou is releasing on Update 2.7 in Genshin Impact. It’s expected that Heizou’s banner will be available around May 31, 2022. However we could see his release date pushed further into early June 2022.

The Genshin Impact Update 2.7 was initially supposed to release earlier this month but was delayed. Due to this delay, it is challenging to pinpoint when Heizou will release for Genshin Impact.

Other characters such as Yelan and Kuki Shinobu are already expected to release on Update 2.7 and Genshin Impact usually only introduces two new playable characters per update. While it’s a stretch that HoYoverse would announce him this early, it is possible that Heizou will be released on Update 2.8 instead depending on how things go for the developers.

Read our Genshin Impact 2.7 Delay Official article to learn more about the delay.

These leaked skills are courtesy of Honey Hunter who have already documented Heizou’s skills in their database. Here are the leaked Shikanoin Heizou skills, talents, and abilities in Genshin Impact:

Heizou uses his Catalyst to enhance his martial arts instead of casting Anemo DMG from a distance.

This seemingly ordinary straight comes from Heizou’s desire for criminals to confess and repent.

A unique technique the gathers Anemo in one place before unleashing it all in one kick. Is always there in a pinch to land on a criminal’s fleeing back.

Heizou’s passive talents enhance his Elemental Skill: Heartstopper Strike as well as allow him to run around longer.

Shikanoin Heizou’s Constellation is called Cervus Minor and here is what it entails per level:

How to Farm for Shikanoin Heizou in Genshin Impact?

Here are the materials you need to farm to ascend Shikanoin Heizou:

Like other Anemo vision users, Shikanoin Heizou can be farmed for by looking for Vayuda Turquoise Slivers, Fragments, and Gemstones. Go ahead and defeat Treasure Hoarders as they’ll drop the Treasure Hoarder Insignia you need to ascend Heizou. The Onikabuto bug can be found all around Inazuma around Narukami Island. Be prepared to farm for a lot of Mora if you want to max him out.

If you want to ascend Heizou’s Talents you’re going to have to look for certain materials. You’re going to have to beat the Violet Court in Inazuma multiple times to get the Teachings of Transience, Guide to Transience, and Philosophies of Transience. You need to defeat high-level Treasure Hoarders for the Golden Raven Insignia drop. The Magatsu Mitake Narukami no Mikoto boss has a chance to drop the The Meaning of Aeons. There are multiple ways to receive the Crown of Insight from Genshin Impact’s limited time events.

While the Heizou hasn’t released yet, there are already leaks circulating online for his ascension materials. If you’re seeking to main Heizou, it’s a good idea to farm for these materials in advance even if you don’t quite trust the leaked source.

We’ll answer the frequently asked questions you may have about Shikanoin Heizou in Genshin Impact.

What Element Will Shikanoin Heizou Be?

Shikanoin Heizou is confirmed to be an Anemo elemental user. He uses Fudou Style Martial arts in conjunction with casting Elemental DMG.

Yes, Heizou is confirmed to be a four-star character. A surprising considering his unique skillset and animations.

Is Heizou a Boy?

Despite his androgynous appearance, Heizou is indeed male. There are jokes about his feminine appearance online, but HoYoverse has confirmed his gender.

That’s everything about regarding Genshin Impact Shikanoin Heizou. We hope you learned a lot about him from our article. If you really liked this guide, consider checking out our other Genshin Impact related content if you want to get ahead of the curve.