Learn all of the information you need about upcoming new character Yelan! 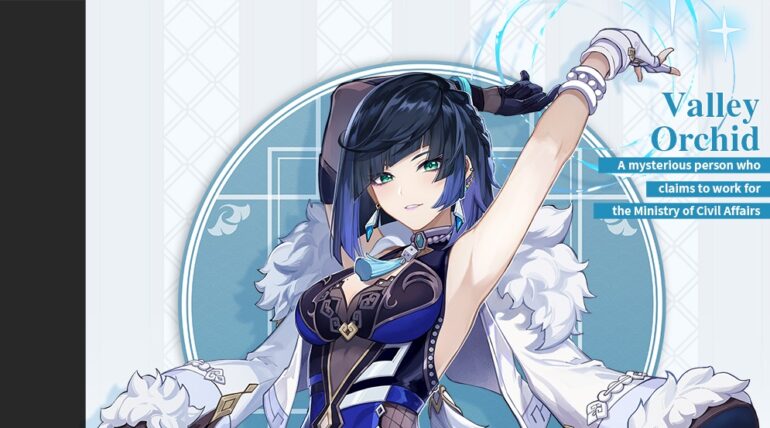 Genshin Impact Yelan was first introduced during version 2.6 where players explored The Chasm, a large new area just to the west of Liyue, the second kingdom to visit in the game. Players met her during their exploration, but her face was not revealed during that time and claimed she was working for the Ministry of Civil Affairs. For those who do know about her were quick to notice who she really was and it also hints of her imminent release date.

For those who do not know about her, Yelan is a Hydro Bow user that has a unique way of firing her arrows on enemies. Currently, only a little is known about her aside from the ones posted a while ago on Twitter, but data miners already have tons of information about her.

If the leaks are true, then Genshin Impact Yelan is going to be released soon. We have also collected tons of information about her like abilities, leaked gameplay videos, passive talents, and more. Check out all of the details below.

Known info on characters in upcoming Yelan banner is as follows:

Original: It is expected that the Genshin Impact Yelan release date will be on the launch of update 2.7, which is still a long way. After HoYoVerse announced its delay, it is still not clear when the update will be available, but some say it should be by the end of May 2022 or early June 2022. It has not been officially confirmed that Yelan will be available when update 2.7 launches, but just like her predecessors Kamisato Ayato and Yae Miko, she should be the main star of the new banner that will come with it.

Yelan is still on beta testing, but her full kit has already leaked online. This means information about her abilities are already in the wild. Also, all ability abilities not confirmed yet. Check out all of her abilities here.

Note: All Passive Talent names are not final and not confirmed by HoYoVerse.

Note: All constellation names are not final and not confirmed by HoYoVerse.

Yelan will need tons of items and one of them comes from the Oceanid, which is the Varunada Lazurite. Starconches can be found anywhere on beaches, but most of them are in Liyue. Insignias can be earned by defeating the Fatui agents scattered all over the three kingdoms. To farm Runic Fangs, players only need to defeat the Ruin Serpent Boss.

Just like her Ascension, Yelan needs a lot of Insignia items from Fatui in order to level up her talents. She also needs tons of Prosperity items that can be farmed in Taishan Mansion Domain with schedules on Monday, Thursday, and Sunday. At a later stage, she will need Gilded Scales that can be farmed from lvl. 70 Azhdaha from the Beneath the Dragon-Queller Trounce Domain. Lastly, level 10 will need a Crown of Insight, just like other characters’ talents.

Several leaked Yelan beta gamepelay videos have been online for a while now and here are just the latest ones showcasing her abilities, attacks, and more.

And that is it for Genshin Impact Yelan details that are known currently. Updates and more details might be introduced in the future and possibly the official ones from HoYoVerse so keep an eye on these guides when we get it updated.

Want to know more about Genshin Impact? Check out our guides below: