A guide about the Vibro-Crystal Research challenge in Genshin Impact. 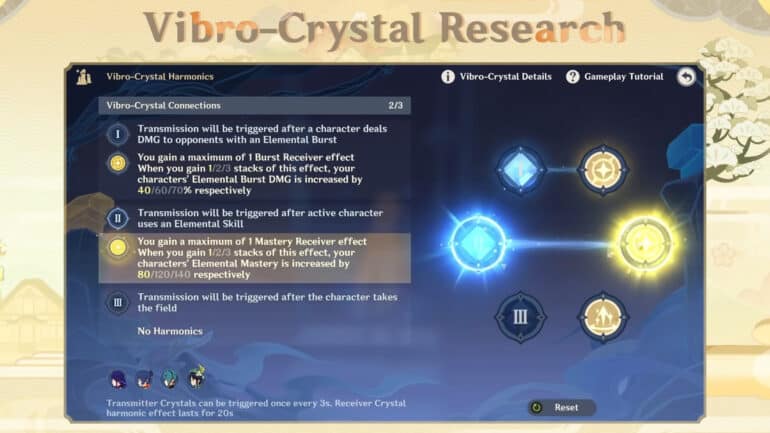 The Vibro-Crystal research is one of the challenges that was added along in the Genshin Impact 2.6 update. In this challenge, a researcher from Fontaine is presently on the outskirts of The Chasm, studying the harmonic motion between gems known as Vibro-Crystals. Your objective is to harness the power of the Vibro-Crystals to enhance your abilities and clear out as many enemies as you can within a set amount of time.

The details about this challenge are based on the information that we got from the trailer and special program released so far. We will be updating this guide once new information becomes available.

Each challenge is divided into two battles. Players must set up two parties, one party for each of the first and second halves of the challenge. They should also set up their Vibro-Crystals by connecting a Transmitter Crystal to a Receiver Crystal depending on how they want to trigger a specific combat buff.

Players will then proceed to the Harmonics Test where they will have to defeat as many opponents as possible within the time limit. The real challenge will be on how well the teams and the Vibro-Crystals are set up to synergize with one another to achieve high scores out of these challenges. Similar to previous challenges, players are also allowed to choose from a set of Trial Characters to help in their party.

Players will be awarded with insignias depending on the score that they achieve at the end of each challenge.

How to set up the Vibro-Crystal Harmonics?

Within the Vibro-Crystal Harmonics menu, players will have to set up the Vibro-Crystals based on what combat buffs they want to get during the challenge and how these buffs will be triggered. To set these up, simply link up a transmitter crystal to a receiver crystal.

Each party for both halves of the challenge will have their own Vibro-Crystal setup, so make sure to configure the harmonics for both parties.

These blue crystals trigger connected receiver crystals when certain conditions are met, such as:

Transmitter Crystals can be triggered once every 3 seconds.

These yellow crystals trigger the buffs when the transmitter crystals connected to them have their conditions met, such as:

Completing the Vibro-Crystal Research challenges and achieving high scores will reward you with the following: