Ghostwire Tokyo – How to Unlock the Fallout 4 Vault Suit

Wasteland or Ghost Town, it doesn't matter to the lone wanderer and his ghost friend 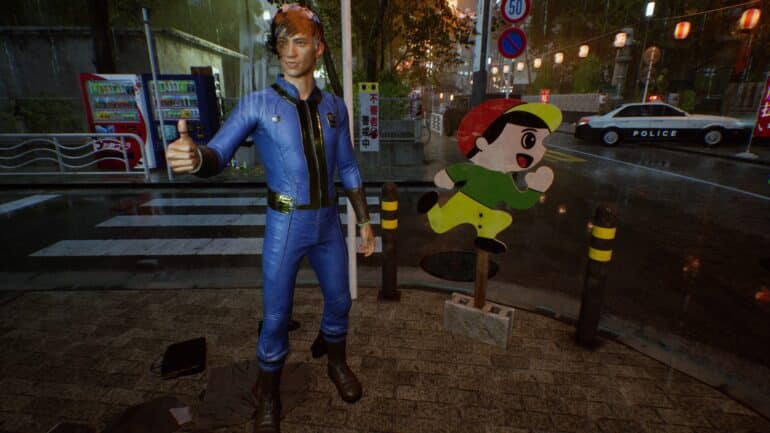 Ghostwire Tokyo takes place in a world overrun by ghosts, but it doesn’t mean you can’t run around the whole city dressed in a Fallout 4 Vault Suit. Crossovers have been a thing in gaming since time immemorial and Ghostwire Tokyo being published by Bethesda Softworks, it makes absolute sense to see something from the Commonwealth make a cameo in the empty streets of Tokyo.

As part of our Ghostwire Tokyo guides, here is how you unlock the Fallout 4 Vault Suit in the game.

How to unlock the Fallout 4 Vault Suit in Ghostwire Tokyo

To unlock the Fallout 4 Vault Suit, you must complete the “Crimson Moon” side mission. The mission becomes available near the end of Chapter 2. The mission marker itself can be found at the payphone beside the Construction Labyrinth, south of Shibuya Station.

Ed left a recording asking KK to collect observation data connected to the crimson moon phenomenon that’s hanging over the skies of Shibuya.

The start of the mission asks the player to collect the Ghostwear wristwatch, an observation device that is used to collect data on the moon. It is located in one of the station’s lockers behind Akito. Once you collect the device, you must then make your way to the top of three buildings in order to collect data.

The closest one is straight to the west, on the same commercial building as the Yashin Shrine. Alternatively, you can head to the office building to the north or the construction site down south, if you want. The task can be accomplished in any order.

For the commercial building, you’ll want to run around the south of the overhead bridge until you see a Tengu flying ahead. Grapple onto it and head north following the rails until you see an escalator. Keep heading up the escalators until you reach the top of the second escalator. Look up and you’ll see a Tengu overhead. Grapple onto it, climb up the ladder, and use the suspended scaffold to reach the top. Once you get to the top, you’ll be greeted by some Wanderers. Fight them off until you clear the area. There’s a ladder at the far end of the roof that’ll take you to the top of the building. That’s where you’re going to collect data from.

After that, you can simply jump off the roof and start heading either North or South.

If you’ve decided to go south, you’ll want to approach the construction site from the south, entering from the Construction Labyrinth. There is a suspended scaffold on the side of the building. Take it and you’ll find yourself near the top of the building. And again, there will be enemies to take care of once you get off the platform. Keep heading up until you’re on the walkway on the back. Keep going up until you find the spot where you start making your observations.

For the final objective, you’ll need to head north until you reach the Shibuya Scramble Crossing. Keep heading north on the road until you see a fire escape. Take it up to the very top and you should see a suspended scaffold. Take it, and use the ladder on the far end of the roof. Fight off all the enemies you see along the way. Somewhere on that roof is the spot to collect the final bits of data.

Finally, head back to the payphone. Upload the data to Ed, and you’re done. You should be getting the notification that you’ve gotten the set.

How to Equip the Fallout 4 Vault Suit in Ghostwire Tokyo

To equip the Fallout 4 Vault Suit in Ghostwire Tokyo, you have to open the Inventory screen. Cycle through the menus by pressing R1 until you are on the Outfits screen.

Scroll down the list until you see the Complete Outfits. You should be able to see the set at the end of the line. Press (X) to equip it. And there you have it, the Fallout 4 Vault Suit.

Enjoy wandering the streets of Shibuya as the Lone Vault Dweller.