Is Gotham Knights Crossplay? Cross-Platform, Co-Op and How to Play With Friends

Details on Gotham Knights crossplay. Will Gotham Knight's co-op allow players to play with friends on other platforms? 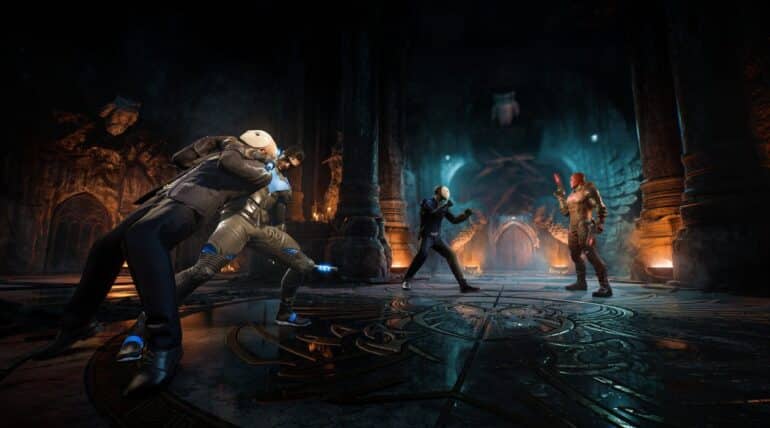 Gotham Knights crossplay was something players always assumed to be a given. In a time where most games make themselves accessible for friends to play in any platform, cross-platform play seems like such a basic feature. Especially one that is a multiplayer focused game like Gotham Knights. Which begs the question…

Will Gotham Knights Have Crossplay?

No, Gotham Knights will not feature crossplay. The game developers have confirmed in the official FAQ that they are not planning to support cross-platform play at this time. In other words, you can only team up with people who are playing on the same platform as you. Xbox Series X|S and PlayStation 5 users cannot play together on PC, for example.

This doesn’t mean that we won’t see cross-platform play eventually available for the game when it launches. But we’ll probably get Gotham Knights crossplay after WB Games Montréal have finished ironing out any potential issues the game might have.

Whether Gotham Knights crossplay will be added depends on WB Games Montréal and player demand. We expect the developers to focus on ensuring the basic co-op experience works without issues before moving to put the player base together through cross-platform play.

Still, Gotham Knights will release on October 25, 2022 so there’s still plenty of time for WB Games Montréal to change their minds and announce cross-platform play sometime in the near future.

Will Gotham Knights Have Cross-Generation Play?

No, Gotham Knights will not have cross-generation play. The developers have confirmed that the game is not even coming to PS4 and Xbox One. Read all about it on our article about Gotham Knights Officially Confirms Console Exclusivity for more details.

Gotham Knights will only be available for the latest generation consoles and PC. According to WB Games Montréal this was “to provide players with the best possible gameplay experience.” This may mean that the Xbox One and PS4 can no longer keep up with the hardware demands of Gotham Knights.

Will there be couch co-op in Gotham Knights?

Local co-op, also known as couch co-op, will not be an option for Gotham Knights’ co-op mode. This implies that in order to play with your friends on a console, those of you who use a console will require a subscription to either PlayStation Plus or Xbox Live Gold. The only co-op mode confirmed for Gotham Knights is through online multiplayer.

How Many Players Can You Play With in Gotham Knights Co-op?

You can team up with one other player in Gotham Knights co-op play. Sadly, developers have confirmed that there will be no four-play cooperative play. Read our Gotham Knights Officially Not Getting 4-Player Co-Op Multiplayer for more details.

Despite having Batgirl, Red Hood, Robin, and Nightwing on the rooster of characters you can play as, you can only team up in duos. You’ll have to bring the sad news to your two other friends. Besides Gotham Knights crossplay not being a thing, you also won’t be able utilize all four characters in one game session.

Still, it is appealing to patrol Gotham as a team of crime-fighting duo. We’ve always been excited to see Dick Grayson working with his estranged brother, Jason Todd. Gotham Knights is the perfect opportunity to see the Bat family dynamic in action.

There is still the question of what happens if two players want to play the same crime fighting hero. We can’t all be Nightwing.

Can You Play Gotham Knights Alone?

Yes, you can play Gotham Knights alone. If you want to be playing by yourself, you can fight crime in Gotham without anyone’s assistance.

Can You Play The Same Character in Gotham Knights?

Yes, you can play the same character in Gotham Knights. This means you’re able to play as whoever you want without restriction even if your coop partner is also playing that character during your multiplayer session. If you ever wanted to see what two wisecracking Nightwings fighting side-by-side, you can.

Does Your Level Scale With Your Coop Partner in Gotham Knights?

Your level will scale with your coop partner to ensure you both have an optimal experience when playing Gotham Knights. Players will be playing on the same level to ensure they’re not underpowered when fighting against some of the higher leveled enemies.

Thanks to level scaling coop will never feel restricted to a gated level. You’ll be able to team up with veteran and new players alike without feeling out of place in combat.

Your coop progress will not affect your Gotham Knights campaign. When joining a friend’s sessions, you’re able to play story missions with them but it will not advance yours if you’re behind. This means that once you’re no longer playing with them, you have to repeat those missions to advance the story.

Your earned loot, experience, and gear will still come with you even after dropping out of coop play. So you can still come back stronger to tackle your campaign progression with better gear.

We hope this answers if Gotham Knights crossplay is a thing in the game as well as any other questions you might have. We have articles regarding Gotham Knights that you may be interested in. Check them out to learn more about this upcoming DC game.

Speaking of Nightwing and Jason Todd as bash brothers, check out the gameplay video released for Gotham Knights featuring both of them.