A guide on how to complete the Chaos Line Dungeon in Lost Ark. 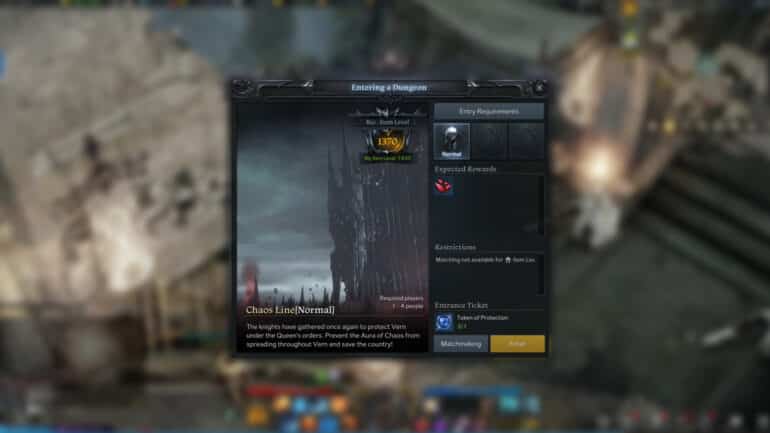 The Lost Ark Chaos Line is a new weekly dungeon that was added in the latest update of the game. Along with the opening of the South Vern region, players can take on and complete the new region quests to be able to access the new Chaos Line dungeons. This dungeon provides a new type of currency which can be used to purchase several kinds of Tier 3 honing materials.

In this guide, we will talk about how to access the Chaos Line and how to complete it for the rewards.

How to Unlock the Chaos Line Dungeon in Lost Ark

The Lost Ark Chaos Line Dungeon is meant to be played by characters who have already reached the upper levels of Tier 3 as it requires an iLvl of 1370 and it also requires clearing out the new quests in the South Vern region.

First, you will need to complete the World Quests in South Vern. Once they have been completed, head to North Vern and talk to Magick Scholar Jeneca near the Chaos Gate. Talk to her and accept the Become a Member of the Knights quest.

Completing the Become a Member of the Knights quest will lead you to the entrance to the Chaos Line dungeon in Bellion Ruins in South Vern, as well as give you two Tokens of Protection which will allow you to enter the dungeon.

How to Enter the Chaos Line Dungeon in Lost Ark

To enter the Chaos Line Dungeon, you will need to be at least at iLvl 1370 and you will need to have a Token of Protection with you. These tokens can be received as a reward from completing the I Must Protect quest which is a weekly roster-wide quest.

To get the I Must Protect weekly quest, you must speak to Professor Farhat located at the West Plaza of Bellion Ruins in South Vern. He will ask you to retrieve 150 Soundstones from demons. The areas where the enemies can be found are marked on the map. Defeat these enemies to obtain the soundstones.

Once it’s done, report back to Professor Farhat and you will receive two (2) Tokens of Protection. These tokens will be consumed whenever you enter the Chaos Line Dungeon.

You can run the dungeon solo or join a party of four as the dungeon’s difficulty will be scaled.

How to Complete the Chaos Line Dungeon in Lost Ark

Your objective in this dungeon is to extinguish the flames that are found on top of the altars located within locked rooms. Once all flames have been snuffed out, you will complete the dungeon.

Defeat monsters to get an Altar Room Key

Once you enter the dungeon, you will have to defeat a mini boss to dispel the barrier that shields the key. You can see which area in the dungeon has a key by looking for the areas marked with the key icon on the minimap. You can only hold 1 key at a time, so once you have one, proceed to the next step.

Extinguish the Altar Ember on top of the brazier

Once inside the Altar Room, locate the brazier that holds the fire. Eliminate the mini boss that guards the brazier to dispel the barrier protecting the brazier. Interact with the brazier to put out the fire and then defeat the Elite mob within the room. Repeat step 1 and continue doing the steps until all three Altar Embers have been put out.

Extinguishing all Altar Embers will summon the final boss Shadowed Kaishur. Defeat the boss to clear the dungeon.

As you defeat the boss and the elite enemies like the Wrath Knight, you will receive Fragmented Blood Magick Stones as their drops. You can get around 750 of these in each Chaos Line run.

Fragmented Blood Magick Stones can then be used to purchase different kinds of honing materials from Professor Farhat. There will be more rewards added into the list once the Hard difficulty for the Chaos Line dungeon rolls out in the future.

These are all the items that can be purchased from Professor Farhat:

If you like this Guide, be sure to check out our other Lost Ark articles here:

Check out this video by DeanV_x showing how to complete the Chaos Line: