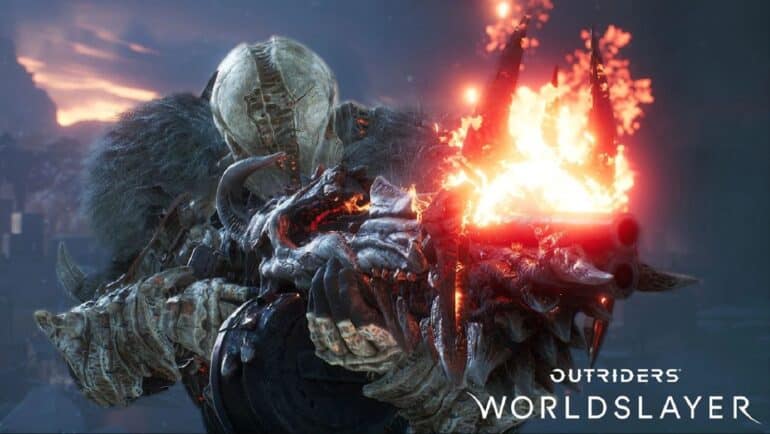 Outriders Worldslayer DLC will be released on June 30th, and it’s finally time to get our hands on all of the new Outriders Worldslayer legendary weapons it has to offer. Apocalypse Tiers and a brand-new campaign aren’t the only things this DLC has to offer; new legendary assault rifles, shotguns, and auto sniper rifles are all included, and players can’t wait to try them out.

Lumberjack, a new sidearm ideal for Technomancers. It’s equipped with a unique MOD called Essence Extractor, which restores 5% of your Max Health upon successful shots on enemies afflicted by any status effects. Each active status applied to the target multiplies the amount of healing received.

Thunderclap, an automatic shotgun equipped with a devastating MOD called Nikola’s Revenge, causing shots to link up to 5 enemies within a 4 meter radius around the initial target, dealing damage over 2 seconds to each of them as long as the initial target is alive.

Charred Lance , a double gun assault weapon that comes with a unique MOD called Death Ray, which forms an Anomaly beam when aiming down sights, dealing damage every 0.3 seconds upon impact.

The new apocalypse tier weaponry includes the assault rifle Deathscape, which is ideal for Technomancers. It comes with a unique MOD called Stigmatized which inflicts inflicts Toxic upon successful shots and marks the target for 5 seconds. Killing marked targets causes explosion dealing damage in a 5 meter radius, marks enemies caught in the explosion.

Mythos, a light machinegun equipped with a particularly potent unique mod called Omen, which fires a cover-piercing Anomaly projectile that inflicts Bleed, increasing the damage received by 30% for 3-4 seconds.

Sunfall is a submachine gun ideal for Technomancers that’s equipped with a unique MOD called Firestorm. Successful shots summon a homing firestorm that inflicts burn and deals damage to enemies within radius for 8 seconds. Firestorm’s radius increases with each successful shot on the afflicted target.

Decadence, an automatic sniper rifle that comes with a unique MOD called Relativity Theorem, which reduces 1 random skill cooldown by 10% on Critical shots.

Vortex is an automatic sniper rifle ideal for Tricksters. It comes with a unique MOD called Slashing Twister, which creates a tornado on Successful shots, lasting for 8 seconds and deals damage every 0.5 seconds.

Overall, the game’s future looks promising thanks to the addition of these new legendary weaponry and mods. Even though there is no guarantee that Outrider Worldslayer will thrive, People Can Fly has a ton of stuff in queue.

Here’s an awesome video by Karpo Gaming on How To Get Every NEW LEGENDARY WEAPON! GEAR & MODS in Outriders Worldslayer: