A look at the Paldea region of Pokémon Scarlet and Violet. 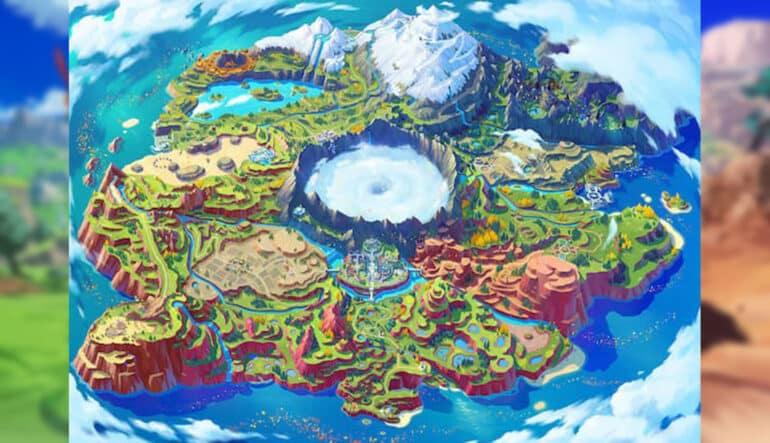 Paldea is the official name of the main region where the events of Pokémon Scarlet and Violet happen. Aside from the various shots of its different regions, the main website has also shown an illustration of the entire region. We’re going to take a closer look at the Pokémon Scarlet and Violet Paldea region and see what details we can get from it.

What country is Pokémon Scarlet and Violet based on?

Paldea is based from the real-life country of Spain, and possibly including Portugal, not only with its rough geographical similarities, but also with its general theme found in the overworld, environment, and Pokémon nomenclature.

The entire landmass is almost surrounded by water on all sides, save from the northeastern part. In real-life geography, Spain is also connected on the same northeastern region with France. However, it is not the case with Paldea and Kalos, the analog to France in the Pokémon world, as half of the Kalos region is attached to land and nowhere does it have a similar region that could make it look like it is connected to Paldea.

The northeastern region of Paldea can be speculated to be connected to the southern region of Galar instead, or it may just be another unnamed landmass.

No official detail about the origin of the region’s name has been released as of this writing, however we can speculate that it may be an amalgamation of the words “paleo” referring to anything ancient and “aldea” which is a spanish word for a hamlet or a small village.

Paldea has different regions within itself, and it noticeably has lots of elevation variances with its hills, mountains, and cliffs. its most notable feature is the giant crater in the middle that seems to house a huge swirling cloud in it.

Its main city, which is still unnamed at this point, sits on the south side of the crater, and is possibly where the main academy which was shown in the teasers so far is located. It appears to be one of the only three cities in the entire region, with the other two cities located on the far east, and near the western side of the crater.

A bunch of lakes, ponds, and rivers can also be found within the regions. The largest river is being fed from a spring above a mountain on the west side of the region, and it flows across the region, around the central city, and down towards the southeastern side. Smaller rivers can be found coming from the snow-capped mountains on the northern side.

Some details that were leaked suggests that Scarlet and Violet could have a DLC expansion similar to Sword and Shield. If this is true, then the northeastern side of the region could become the setting of the additional content. The location seems to have some more area that is being obscured by clouds based on the illustration.