Rollerdrome All Bosses & How to Defeat

A guide for how to defeat each boss in Rollerdrome. 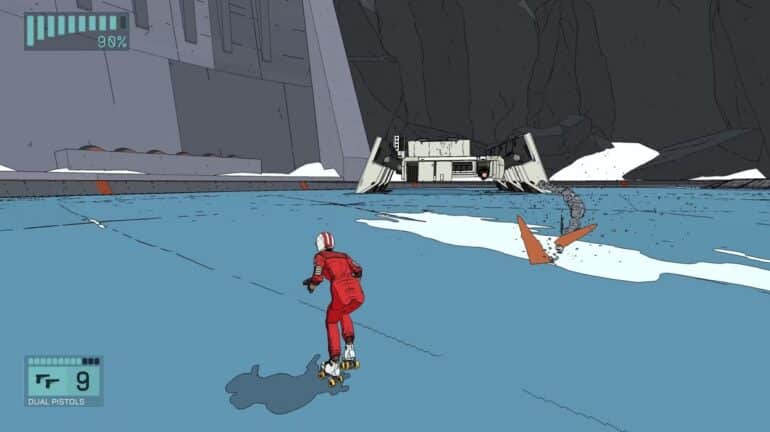 Rollerdrome pits you against bosses to test the skills you’ve accumulated against a truly tough opponent. These bosses will quickly put you on your backfoot unless you know how to handle them properly. Sharpen your skating skills because we’ll show you all bosses and how to defeat them in Rollerdrome.

All Bosses in Rollerdrome

Spider Tanks are giant behemoths that can move around the environment while attacking you in a variety of ways. The interesting thing about Spider Tanks is that you can skate on top of them as they also function as another structure you can do tricks on. This leaves a lot of ways to combat the two Spider Tanks in the game.

You’ll notice that there are no challenges when fighting the Spider Tanks. The game isn’t even keeping track of your score. This is a load off your back since you don’t have to think about the most stylish way to take out the Spider Tank.

How to Defeat Spider Tank Mk. I in Rollerdrome?

To defeat the Spider Tank Mk. I, you have to skate on top of it and damage the orange glowing weak spot until its life bar hits zero. You’ll notice that its legs are shaped like ramps and they’re like that for a reason. The catch is that you have to wait until one of its legs extend allowing you to ride up, otherwise damaging it is impossible.

Throwing a single grenade while its weak spot is exposed should be enough to do the trick. Once you damage the Spider Tank Mk. I enough, it will throw you off of it. This means that you can’t just stay up there for the duration of your fight with it.

During the fight, enemies will spawn around the large arena you’re fighting the boss on. You need to remove all of them before the Spider Tank Mk. I can be vulnerable again. It helps to keep the sniper mook alive so you can use them to dodge bullets and enter Super Reflex Time to take out everyone else.

How to Defeat Spider Tank Mk. II in Rollerdrome?

You can defeat the Spider Tank Mk. II by damaging its weak spot in Rollerdrome. The fight with it is similar to its Mk. I counterpart, except that the Mk. II is bringing in some new weapons. It also starts with a forcefield forcing you to deal with Warheads, Snipers, and a Polybeam protecting it.

There are three groups of enemies throughout the fight with the Spider Tank Mk. II that you’ll have to beat. The last wave of mooks that you’ll have to beat are two Mecha Brutes, two Snipers, two Polybeam, and a Warhead. This can be extremely challenging as you’re fighting the enemies throughout the arena while dodging projectiles from the Spider Tank boss.

The Spider Tank Mk. II is the last boss of Rollerdrome. Once you defeat it, you’ve cleared the campaign.

That’s all the bosses you can fight in Rollerdrome and how to beat them. We hope you found this article to be informative. Stay with us because we have more Rollerdrome content to check out.

Check out this Youtube video from Kakuchopurei who fights the Spider Tank Mk. II to get an idea what you’re up against.