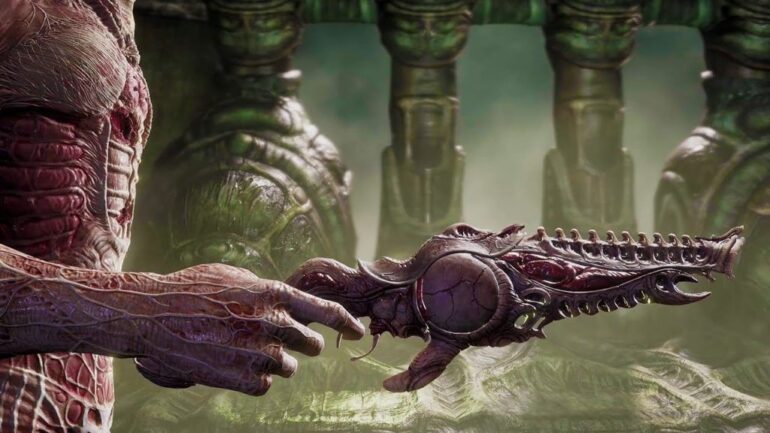 The Scorn weapons reflect the decaying world in which the game is set. They appear to be organic in nature, and in a world that doesn’t have anything resembling bullets, they instead use organic projectiles of unknown compositions. At first glance, they appear to be weapon-like in shape but serve another purpose that makes sense in gameplay and narrative sense.

This guide will explain all of the Scorn weapons found during the entirety of the journey. And much like the overall story of the game, all weapons are open to interpretation.

And with that, let’s get on to our list. And do note that these are not the official names for the Scorn weapons. They are as we see them in relation to similar weapons found in other FPS games.

This is technically the first available weapon in the game. It is acquired after ascending to the higher floors of the processing facility. It is also the key to solving the pod puzzle.

It functions like a piston that extends out at a rapid pace. When hitting enemies with this weapon, one can hear the crunch of bone as the weapon bypasses flesh and pounds said bone to dust. They fire twice before having to charge again. Because of this, it is best used as a backup when you have no other choice.

The featured weapon seen in most Scorn promotional material in the game, this weapon is acquired in Act III as you are doing the Light Node puzzle. You can find it on the wall in one of the side rooms.

This weapon is most similar to short-barrel shotguns in the way that it fires a single “round” from its 6-round magazine. The Scorn weapon uses projectiles created by the organic multi-use device. Interestingly, there is an explosion every time you pull the trigger implying that the projectile is ejected through the aid of a controlled explosion.

The weapon can have up to 12 shots in reserve.

Another one of the core Scorn weapons, this weapon functions similarly to semi-auto revolving shotguns. This weapon is first obtained on the lowest level of the tower structure in Act IV.

Every time this weapon fires, the barrel spins to the next available one. It holds 3 projectiles in the magazine and another 6 in reserve. This is considered to be the go-to of Scorn weapons as it is capable of downing basic enemies in one shot and 2 for the beefier four-legged ones.

Out of all the Scorn Weapons, this grenade launcher is head and shoulders above all others in terms of damage potential but sees limited use in one boss fight and probably a few puzzle solutions.

This weapon is obtained after defeating the exo-suit-like machine that defends the fetus creature.

And there you have it, all the Scorn weapons that can be found in the game. The offering may be on the shallow side but there’s no denying that a lot of effort went into the look and feel of the weapons, particularly glory kills using the piston gun.

It is also worth noting that for what’s it worth, all the weapons are impactful as you won’t be facing any enemies that are particularly agile. With the exception of the parasite, of course. That one is on a completely different level than anything else in the game… and for good reason.

Check out our other Scorn articles:

Check out this video from YouTuber Hopezera where he showcases all four Scorn weapons – their functions and animations.