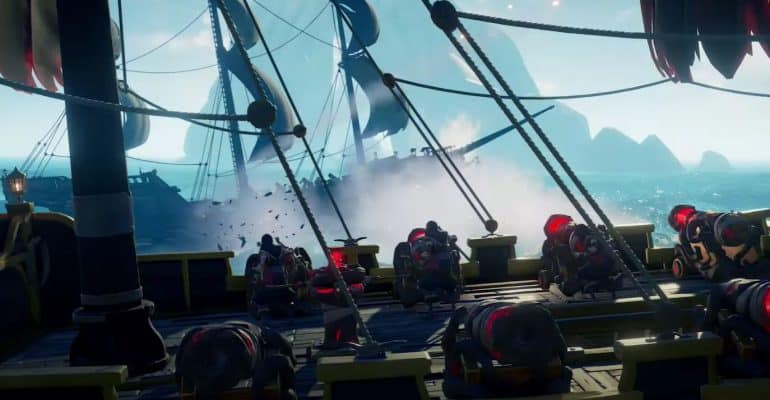 Sea of Thieves Season 8 adds On-Demand PVP which finally lets you and your crew go toe-to-toe against other players without having to find them in the open world map. Pirates who are feeling particularly bloodthirsty will be happy with the latest season finally adding a way for them to sate their bloodlust. For those who think that Sea of Thieves is too peaceful, your wish has come true.

This Sea of Thieves guide will teach you everything you need to know about the On-Demand PVP to thrive in pirate naval combat.

The On-Demand PVP in Sea of Thieves works by matchmaking you against other players who are seeking to battle you. Now, instead of looking for other pirate crews in the open seas, you can immediately scratch the itch of a pirate fight just by opting in using this feature. What On-Demand PVP in Sea of Thieves does is essentially make looking for another pirate crew to fight easier.

You can access On-Demand PVP by first joining a Faction in Sea of Thieves. You can do this by going to the Hourglass of Fate on your Captain’s Table. After pledging allegiance to a Faction, you can then decide to attack or defend against other pirate crews.

There are two Factions to choose. You can either decide to pledge allegiance to the Guardians of Fortune or the Servants of the Flame. It won’t affect who you fight, but it will determine which rewards you get with the Allegiance you earn.

Winning On-Demand PVP fights will reward you with gold, so it isn’t simply a feature made to scratch your itch for battle. Every time you win, the Hourglass Value added to your Hourglass of Fate will increase. You can then pocket the winnings by leaving your Faction of choice at any Outpost.

How to invade other players with On-Demand PVP?

Open the War Map and vote to battle to invade other players with On-Demand PVP. As soon as you’re sailing in open waters, your ship will sink down onto the bottom of the ocean into what’s called an Invasion Tunnel while you wait for the game to matchmake you against other players.

When you’re in the Invasion Tunnel, you’ll be waiting for Sea of Thieves to find other players to fight. Once the game finds other players, your ship will emerge from the depths to where other players are located. This will commence your invasion of them.

If you’re carrying any treasure with you on your ship, you will not be able to take them through the Invasion Tunnel. So be sure to sell them first before you invade other players. You are able to take resources with you which includes the Resource Crates. This means that you should stock up first before choosing to invade.

How to defend against other players with On-Demand PVP?

To defend against other players with On-Demand PVP, you have to join a Faction using the Hourglass of Fate. You will automatically be on the defense against other pirate crews once other players have invaded you. Ignore the War Map and instead just traverse the open waters while waiting for others to invade.

This does pose a risk however, as you stand to have your treasure stolen if you lose. You will risk the time you took to look for those treasures from lost fights.

Best Strategy When Fighting in the On-Demand PVP Mode

The deadliest mistake you can make is by charging into the enemy ship’s broadside in the beginning of the fight. Players usually do this to be able to get to the hostile ship’s enemy players as soon as possible. However, this actually puts you in the line of fire for a cannon barrage.

If you’re looking to survive, the best advice is immediately turn your ships at the start of the match and raise the sails. This will give you a chance to fire shots from the cannon ball before the enemy fires at you. Most who immediately nosedive for the broadside of the enemy’s ship usually don’t last too long above the waters.

Participating in the On-Demand PVP in Sea of Thieves will earn you Allegiance for either The Guardians of Fortune or The Servants of the Flame Faction. These Allegiance will then earn you rewards which you can use to earn the rewards exclusive to those two factions.

These rewards can range from exclusive Curses to brand new Captaincy cosmetics. The higher your Allegiance is, the more you’ll earn. At Allegiance Level 100 with the Guardians of Fortune, you’ll get the Ghost Curse cosmetic which gives your pirate an otherworldly look. For the Servants of the Flame, you’ll get the Skeleton Curse at Allegiance Level 100 which makes your pirate look like they’ve become one with the undead.

That’s our How to invade other players with On-Demand PVP guide. We hope you found this article to be informative. For more on Sea of Thieves, you’re already in the right place.

Check out this Youtube video from Synicall showing advice on how to win matches in the On-Demand PVP in Sea of Thieves.