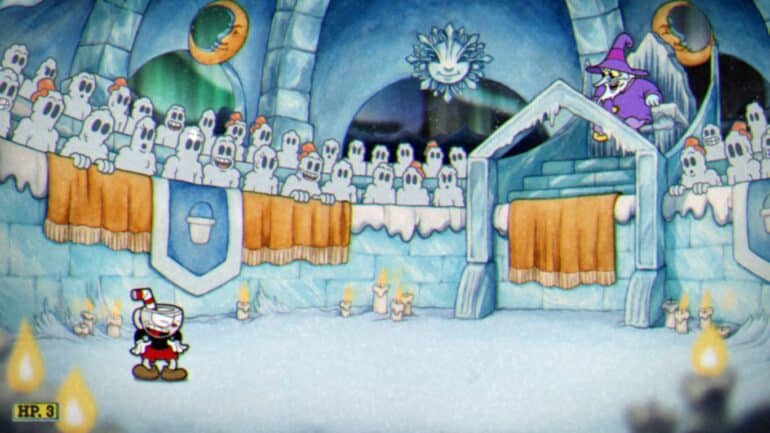 Cuphead DLC features some pretty out-there fights. Oddly enough, Snow Cult Scuffle isn’t one of them. Instead, it leans more a slightly more difficult than the usual second phase. The third phase is technically hard too but there’s a lack of random elements that will make it truly hard.

This is a right and proper arena fight with snow folk watching their main man, Mortimer Freeze, beat up a cup for the entertainment of the masses. There aren’t too many surprises here when it comes to the layout.

The first phase is a 1-on-1 fight with Mortimer Freeze. The snow wizard is content with flying over your head, shooting all sorts of magic, while waiting for a chance to throw down a whale as if it’s a club… Maybe Mortimer would have had better chances if this was a straight up fist fight.

Mortimer’s usual go-to opener is a “magic” trick that summons 4 icicles. They linger in the air for a second while the spell is being channeled. They will go down steadily at an angle. The moment the 4 icicles hit the ground, Mortimer will be setting up his next attack.

You may want to start shooting at them during this time.

The less frequent opener, Mortimer Freeze will conjure up a crystal ball and table. He will then summon cards. These cards are slow-moving and with no tracking but they do have a large hitbox. During this part, don’t be surprised to find yourself in a situation when are you moving between icicles and dodging a flying card.

Finally, Mortimer will pull out a whale from his pocket and will strike the ground with it. It has a considerable windup time but the attack covers more than a third of the screen.

If there are any icicles on the floor when this attack hits, they will be flung to the foreground. It’s quite the sight.

This opening phase is very light, all things considered. Just deal enough damage to Mortimer Freeze and that’ll prompt the next stage to start. Mortimer will turn himself in a Snow Giant. And this is where I think the fight truly starts.

The snow giant phase is a medium-length fight but requires players to know the tells and patterns of its attacks.

The first move we’ll talk about is the snow giant turning into a refrigerator.

The moment it turns into a refrigerator, the top door will open, and a number of winged popsicles which will fly high off-screen. You can actually see how many of them do come out. That’s so you can plan according. They also do go down in one hit.

The second part of this attack starts when the lower door opens up and starts chucking ice cubes all over the arena. They are usually medium cubs that fall to the ground and burst into 2 smaller cubes. The way I’ve learned to counter this is by standing underneath the spot where the cube touched the ground, AFTER the smaller cubes are in the air, and going to places where you aren’t. Occasionally, Mr. Freezer will launch a large ice cube which will then break apart into 2 medium cubes, and so on and so forth. The same rule applies, stand where they land, and you should be fine.

While you are dodging ice cubes, the popsicles will swoop down and try to distract you. Their tracking loosens up the moment you jump over them. Destroy them if you must, but don’t make them your focus. That’s reserved for the big guy.

Its second move is when he hits the ground hard and swords appear underground to impale you. This one isn’t too hard to judge. Just estimate where the second one possibly be after the first sword pops up. You can do this for the first sword too but you’ll have less time to react. Thankfully, their hitbox isn’t too big.

The pictures shown above and below show the moves that’ll catch most players off guard. It’s a near sudden move that, when timed incorrectly, will have heavy consequences. Especially when you are Cuphead or Mugman and you don’t have the luxury of a double jump to save you.

The biggest tell this move has is when the giant is leaning back. It’s only for a brief second but that’s the clearest tell that he is about to launch himself into the air. He also does a slight lean when he’s about to roll across the arena, but it’s not as pronounced as the one where he’s throwing himself.

And that’s about it for all his moves. Do keep in mind that there might be stray popsicles left over from when he transforms into a refrigerator. They can easily break your focus during the other attacks.

Well, just keep blasting, and eventually, the giant will melt, signaling the final phase of the fight. Which requires you to do some platforming.

(‘Do make the platforms your priority. The snow giant’s lower half won’t wait too long before running off-screen, and you’re very likely to get hit the longer you linger.)

The third phase sees Mortimer turning into a giant snowflake in the sky. Its attacks are pretty reasonable but it is the constantly moving platforms that’ll keep you on edge.

The third and final phase is a surprisingly lengthy one. At least that’s how it felt like to me. It could easily just be wanting to get this over with.

Mortimer’s go-to opener sees his ghost zooming across the screen before looping back to the giant snowflake. In the ghost’s wake, 4 angry coned snowballs will form and will immediately start to move forward in the direction they are pointing. You aren’t safe until they leave the screen.

The snowflake’s second attack involves Mortimer’s arms sticking out of the snowflakes. The arms will summon buckets that’ll travel across the screen. Dodging them isn’t too hard. but It’s the fast-moving crescents that attack from the back that might give you issues. This is probably the most dangerous part of the whole fight, and being so close, it can be a heartbreaking defeat.

The last attack we’re going to talk about is the one that involves its eye-popping out and doing a loop across the platforms. Aside from the obvious giant eye going towards you, there’s the threat of lighting going through the top and bottom. You can’t let your guard down just cause it takes the eye a while to get back. It still has a large hitbox.

Alright, that’s all the attacks you need to keep track of and how to deal with them. The third stage is kind of reminiscent of fights in the base game. It takes a while for the snowflake to finally go down. But remain calm, and he’ll go down eventually.

And your reward for beating this boss fight is a bucket full of Icy Sugar Cubes!

This fight is the one closest to fights in the base game. If only for the length of time it takes to finish the third phase. Personally, outside of the final boss, this is probably one of the hardest fights in the DLC. At least it was fast-paced right until the final phase. Would be very annoyed if the fight lasted longer than it currently is. That’s it! That’s all! See ya later!

Also watch this gameplay video by Level20 Games on How to Easily Defeat Mortimer Freeze in Cuphead DLC: