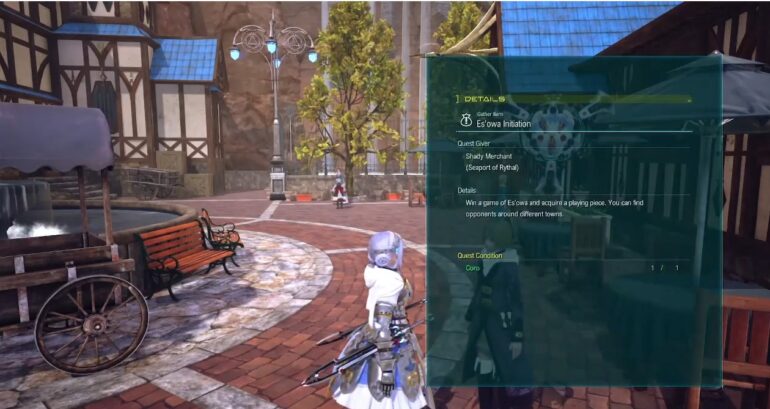 Es’owa Initiation is one of many side quests in Star Ocean: The Divine Force that can be found in the Seaport of Rytha. This guide will help players know what needs to be done to complete this quest and what rewards await them.

How to Start the Es’owa Initiation Side Quest

To begin this quest, players must look for a shady merchant in the Seaport of Rythal. From there, she will challenge players to see if they are strong enough to win the mini-game.

The mini-game that players will play revolves around taking turns in placing pawns. The goal is to reduce the opponent’s HP to 0 by inflicting damage on your enemy equal to the total attack of your pawn at the end of your turn.

Players must remember to place pawns in areas that have open spots and can’t set pawns in places opponents have already surrounded. Powerful moves can be used as well before setting up pieces using the MP gauge. Every pawn on the board has different skills so remember where you place them in the deck beforehand.

How to Complete the Es’owa Initiation Side Quest

After talking to the shady merchant, look around the town for players to challenge. But it is highly recommended to first fight the boy known as the Undefeated Boy hiding at the side of a huge warehouse. After learning the tutorials and defeating him, return back to the shady merchant and report what happened, and the quest will be completed.

Upon completion, players will receive the following rewards that will be useful in their future endeavors in Star Ocean The Divine Force:

That’s our guide for the Es’owa Initiation quest in Star Ocean: The Divine Force. For more Star Ocean Divine Force content, players can visit our previous articles below to get to know more about the game:

Watch this video walkthrough by jimajamer to see how to complete Star Ocean: The Divine Force Es’owa Initiation Side Quest.