How to secure your future in The Quarry. 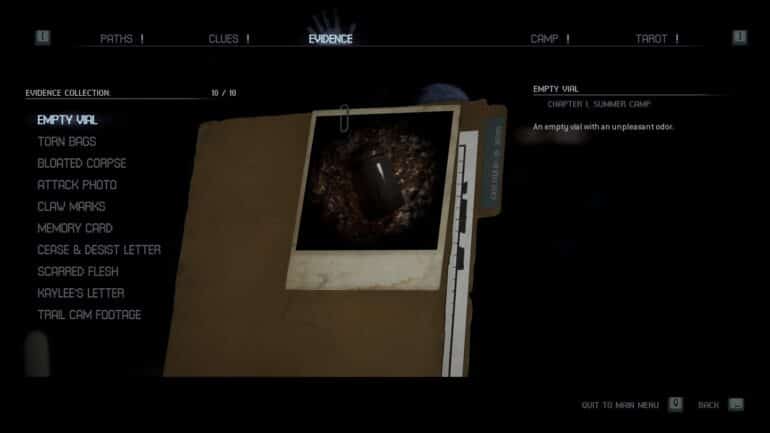 The Quarry Evidence can absolve your characters of being criminally charged. That’s why if you want the best ending, you need to find them all. On this spoiler free The Quarry Evidence locations guide, we’ll show you where to find each one.

There is one Evidence in each of the 10 chapters of The Quarry. There are 10 Evidences in total:

Some of The Quarry Evidence are easy to find. Others are hidden well. They can take some exploration so be sure to look around each of The Quarry’s chapters whenever you have a chance.

We wrote how to find each of The Quarry Evidence above. Keep reading our guide for more detailed information.

Torn Bags Evidence Location: The Torn Bags can be found in Chapter Two inside the cold storage room Emma and Jacob break into. This evidence can be found next to the shotgun on the floor.

Attack Photo Evidence Location: The Attack Photo can be found in Chapter Four on top of the treehouse in the island. As Emma, choose to stun the monster with the taser and then a prompt will appear to take a photo.

Scarred Flesh Evidence Location: The Scarred Flesh can be found in Chapter Eight deep in the Quarry Mines. When playing as Laura exploring the old cave, you’ll find it above the old rusted metal platforms before you enter the tight hole that warns you of a Cave In.

Trail Camp Footage Evidence Location: The Trail Camp Footage can be found in Chapter Ten on the attic of Hackett Camp Lodge. When playing as Laura, go to the second floor of the lodge. Do not prompt to continue the story yet after looking at the oil painting above the fireplace. Instead go to the opposite side where the campers make paint and there is a classroom nearby. Climb the staircase and look to the left. The Trail Camp Footage is inside the brown box front of the blue containers.

What Happens If You Collect All Evidence In The Quarry?

If you miss even one of The Quarry Evidence listed above, the counsellors might be arrested for the horrific events. Though this may depend on whether you actually killed any of the hostile pursuers chasing after your protagonists.

Here are the trophies you unlock from collecting Evidence in The Quarry:

Read our The Quarry Trophy List for all the trophies in the game.

That’s our The Quarry Evidence Locations guide. We hope our article helped you reach the best ending possible for The Quarry. You should stick around some more because we have more The Quarry content for you to check out.

Check out this gameplay trailer released by the official 2K Youtube channel.