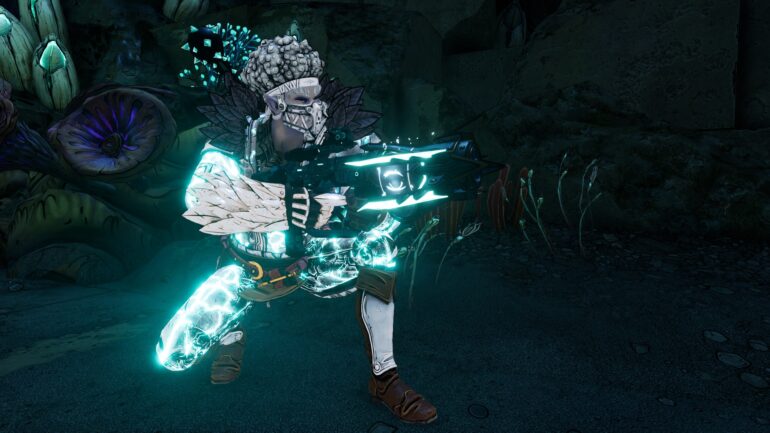 In Tiny Tina’s Wonderlands many various types of ranged weapons or guns can be found scattered across the Wonderlands, each created at random from a wide variety of parts and components, and each with its own unique capabilities.

In the end, you can always rely on firearms over spellcasting and melee fighting any time. Tiny Tina’s Wonderlands is all about shooting and looting, thus familiarizing yourself with the game’s powerful weapons is a must.

All Tiny Tina’s Wonderlands Ranged Weapons or Guns fall into one of six main categories, which corresponds to the six types of munitions that can be found in the various settings. Below are all the guns or ranged weapon types:

The following is what you can expect to find in your ever-expanding toolkit:

A good all-around weapon, the assault rifles you’ll encounter in Wonderlands may be used in any situation. This rifle can be used in close-quarters battle or at a distance, depending on your own preference. It can, however, consume a significant portion of your ammo invisibly.

Splash damage from a wide area of effect is the specialty of heavy weapons. There is no better method to control a large group of agitated Shrooms and Pirate Skeletons than to use these guns. The reload speed is the one thing to watch out for. Heavy Weapons have a sluggish reload speed when compared to other weapons. Prior to reloading this weapon, make sure you’re not in any danger.

In a combat, these smaller but no less lethal weapons are ideal for grasping swiftly. Combat in close- and medium-range is more effective for them. They can be deadly against any enemy type if you have a rapid trigger finger.

They aren’t ideal for long-range warfare, but if you want to get up close and personal with the baddies before blasting them into the sky, shotguns are the weapon for you.

Ranged combat enthusiasts will find Sniper Rifles ideal. If you have these weapons, you can stay back and aim at the enemy’s head while avoiding the confusion of a fight. Using one of the other available weapon types is a good idea if you find yourself in close quarters fighting.

Tiny Tina’s Wonderlands is home to a multitude of weapons manufacturers who produce monstrously destructive weaponry. A gun’s weapon manufacturer give the item a special twist that you won’t find on anything else on the market.

In the case of Legendary Weapons, this logic does not apply because Legendary weapons in Tiny Tina’s Wonderlands are one-of-a-kind and infrequently dropped guns that have unique qualities and attributes that can’t be found on any other gun in the game.

Below and all the 7 Gun Manufacturers in Tina’s Wonderlands and what to expect from the wares of each weapon manufacturer:

Dahlia’s Guns give you a variety of options for how to utilize them. Dahlia firearms have multiple shooting modes to keep things interesting during life-or-death shootouts, so switch things up with the different firing modes. You will use your Dahlia gun in a specific way based on the model you purchased.

Because each gun has its own set of characteristics, each mode behaves differently. For example, Full Auto mode allows you to hold the trigger down to spray bullets everywhere, whereas Burst Fire mode produces staccato bursts that require you to keep squeezing the trigger in order to maintain a continuous stream of fire. Watch the bullets fly when you press down the trigger with these guns.

Polymorphing magic may transform Feriore firearms into winged blasters and bouncing bombs as you toss them across the battlefield. Magic Guns with the ability to transform into several forms – Tiny Tina’s imagination is so expansive that everything is imaginable.

Feriore guns can take on a variety of forms when thrown around during a battle with a little bit of magic. Even if you accidentally fling your pistol into the air, you won’t be rid of it for good! The gun will return to your hand once it has completed its task in transformed form, and just as soon after they’ve reappeared, Feriore guns are ready to be unloaded once more.

Guns from Hyperius will shield you from harm as you aim your weapon. With Hyperius firearms, which produce a magical shield out of thin air anytime you’re aiming down the sights, you can shield yourself even while moving. Even if you’re sprinting, the shield will appear.

You can also improve your aim by firing the weapon against an enemy in a rapid succession. A constant burst of fire is also a good idea for Hyperius guns, as it will allow you to get more precise with each shot.

Skuldugger guns never need to be reloaded since they constantly replenish their own ammo supply from the aether through some kind of magical wizardry. The ominous crunch of Pirate Skeletons closing in on you will no longer force you to hide behind a shattered shack and hurriedly reload your weapon. Skuldugger guns never require reloading, but It’s impossible to keep firing these things indefinitely. You’ll have to take a break and let them cool down if they overheat.

No matter what class of weapon you have, Stoker Guns are well-known for their fast rate of fire (rare or common). Stoker guns have such a fast rate of fire that you may forget about fretting and just let the killing begin. If you’re going to use this weapon, our only caution is that it will quickly deplete your stock of ammo. Because of the high rate of fire, you’ll quickly run out of ammo, so be sure you have plenty on hand before pulling the trigger.

Torgue learned that you enjoy loud bangs in your bangs, therefore he and his crew made sure that every Torgue gun they produced had the highest possible level of detonation and combustion. Now that Torgue has arrived in Wonderlands, you can count on him to provide you with some powerful weapons to help you take on and ultimately destroy the Dragon Lord.

Torgue guns are loaded with explosions, mayhem, and more explosions. Torgue weapons are primarily designed to deal explosion-based damage. Sticky explosives can confuse and then annihilate your enemies if you’re lucky enough to find them. A few can even fire magical mines that cling to their foes before exploding and leaving behind piles of blackened ash in their wake.

Weapons can be equipped with a variety of barrels and accessories, depending on their purpose. Accessories for crossbows and magical barrels are both available.

There are a variety of magical barrels, some of which have a specific elemental impact. Choosing the perfect weapon load-out for you will take some time. However, while you’re trying to figure it out, you’ll get to kill a lot of enemies!

A few Rings and Amulets can enhance the performance of certain weapons in addition to being beautiful pieces of jewelry.

The six various types of weapon damage in Tiny Tina’s Wonderlands, all are in your list of abilities, and are imbued in the weapons you’ve looted:

Check out this awesome video by Struck TLF on GUNS in Tiny Tina’s Wonderlands: