A guide on how to defeat Red Wolf of Radagon in Elden Ring. 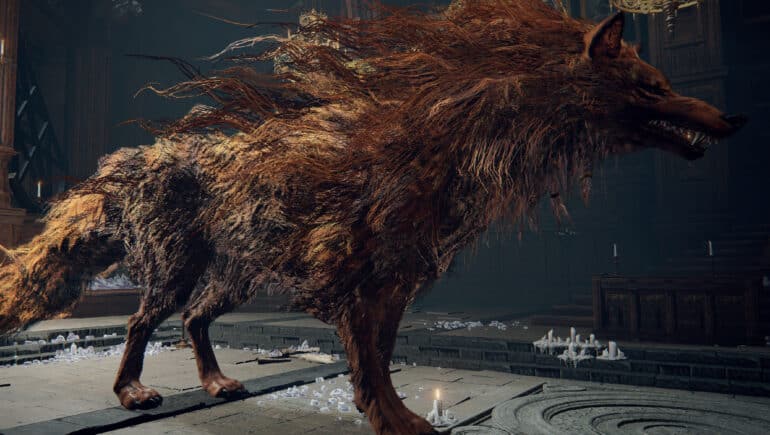 The Red Wolf of Radagon in Elden Ring is one of the great for or mini-boss fights that can be encountered in the game. It stands guard in one of Raya Lucaria Academy’s halls and can be quite difficult to defeat with its very fast moves.

In this guide, we will look into the Red Wolf of Radagon fight and share some tips and tricks on how to win the encounter.

Who is the Red Wolf of Radagon?

The Red Wolf of Radagon is an extremely mobile mini-boss that uses both projectiles and the dip-and-run tactic to overwhelm any one who challenge it. Missing a beat at the wrong place and time is a fatal mistake when facing this boss.

Add the fact that it will auto-dodge projectiles thrown at it, making cheesing from afar not a viable tactic. Despite its speed, it has relatively low health and is weak against slashing and thrusting damage.

Radagon’s Red Wolf of Radagon arena location is found near the Schoolhouse Classroom Site of Grace at the Academy of Raya Lucaria. To progress in the area, you must defeat it. The fight against Red Wolf of Radagon happens in a rectangular room with huge pillars within it. These pillars can barely provide any cover from Red Wolf’s attacks and there are no other obstacles in the room that can do so either.

The most dangerous places to be at in this room are its corners. Try to stay within the middle of the room to give yourself ample space to dodge away from Red Wolf’s attacks.

Red Wolf of Radagon’s attacks are a combination of melee bites and lunges, as well as ranged magic swordtraps. It will also wield an ethereal sword at times to do mid-range slashing attacks.

The key strategy to win the fight is to be patient and wait to strike during its heavy attacks with long animations. On the other hand, do not be greedy as the longest openings that you can get from Red Wolf can only let you do two hits at max – any more and you’ll certainly get hit with its next attack.

Red Wolf will pounce at the player’s location leading to a bite. It can follow it up with one to two more bites as a combo.

Most of Red Wolf’s combos with these attacks only have a maximum of three hits, after which you’ll only have enough time to sneak in one attack before it performs its next one. It can end this combo short if you are out of range.

Look out for the bite where it lifts its head and upper torso up since this is the only bite attack that has a long enough animation to counter with a hit. As for the rest, dodge them accordingly.

Red Wolf will materialize an orange ethereal sword, holding it by the handle with its mouth. It will then do one of the three types of ethereal sword attacks:

Among these slashed, you must keep an eye out for the Jumping Slash as this provides a good opening for a counter-attack if dodged properly. As for the other slashes, time your dodges towards or away from the blade, just make sure that you will not dodge towards a wall.

Red Wolf will run from side to side while summoning one to three blue magic sigils from its mouth. After a second, these will turn into daggers that will fly towards the player.

Red Wolf will place these swordtraps from afar and will move to another side, either to place more, or to prepare for a Jumping Slash. The challenge with this combo is to know when to roll. As much as possible, you would want to do a sidestep to avoid any incoming daggers, then reserve the roll to avoid the Jumping Slash.

How to beat Red Wolf of Radagon Boss Fight

Here are additional tips on how you can beat Red Wolf of Radagon in Elden Ring:

Check out this video by Tyrannicon on how to defeat Red Wolf of Radagon: