Is Vampire The Masquerade Bloodhunt Crossplay – How to Play With Friends

An overview on Vampire: The Masquerade - Bloodhunt's crossplay support. 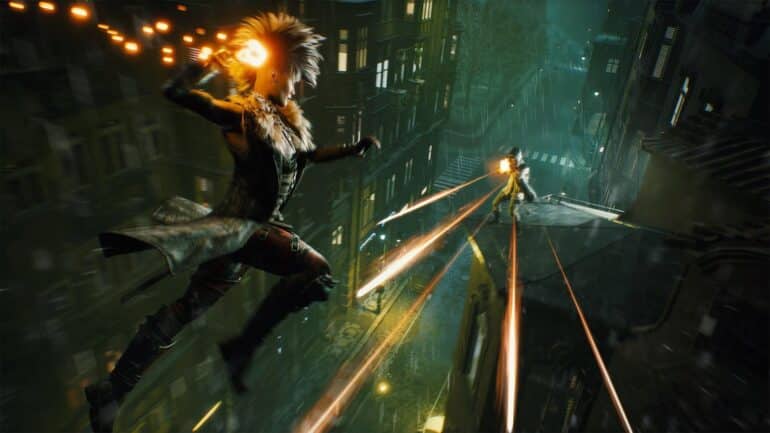 Bloodhunt is the newest free-to-play battle royale set in the universe of the World of Darkness of the Vampire: The Masquerade franchise. Players will be pitting against other vampires from other clans in the city in the struggle to be come the last vampire. This game got released in April 27, 2022 and is exclusive to PC and PS5.

As with the nature of multiplayer games, and its limited platform, players will surely want to know what kinds of multiplayer experiences and support are available in Bloodhunt.

Does Bloodhunt have crossplay support?

Yes, Bloodhunt does have crossplay support between PC and PS5. It’s best to take note that crossplay only happens once you enter a match and arrive into the city of Prague. While players are in the Elysium which is the game’s lobby, players will only be able to group up with other players in the same platform.

Simply put, if you are playing Bloodhunt on the PC, you will only be able to team up with other PC players. Once you start a match, you will be able to fight against both PC and PS5 players.

Can crossplay be disabled in Bloodhunt?

Yes, crossplay can be disabled for Bloodhunt, but only for PS5 users. Players on the PS5 will only be able to play with and against other PS5 players once crossplay is disabled. On the other hand, disabling crossplay is not supported in the PC version, so PC players can still expect to be matched against opponents that are playing on the PS5.

To enable or disable crossplay in Bloodhunt, go to the Options menu and choose your preference. However, it’s important to note that the Devs have urged players not to change the settings as disabling crossplay may result in longer wait times for matches.

How to add friends on Bloodhunt?

To invite a friend in Vampire The Masquerade Bloodhunt, click on the “Find Friend” button on the left side of the screen and enter their Sharkmob ID. Your friend will then receive a friend request, which they can accept from the social menu; once this is done, both of you should appear on each other’s “Friends” tab.

Server failure/error when trying to group with friends on PS5

Some players are reportedly getting an error when playing Bloodhunt on the PS5 that says “Failed to join group. Server error” when attempting to team up with friends.

Is there cross progression in Bloodhunt?

As of the current build of the game, Bloodhunt does not support cross progression between the PC and PS5. Even though players will be able to use the same Sharkmob account to play on both platforms, progress and achievements or trophies will be separate on each platform.

What is there to expect in Bloodhunt’s crossplay feature?

According to the devs, crossplay would allow them to expand to other regions to expand their player base. If the game becomes successful in getting more players into the game, players can expect to see more game modes added in the future.

As of now, there hasn’t been any other news about expanding into the other platforms or even to previous gens as the devs mentioned that they would only want to focus on the PC and PS5 versions for now. If you want to know more, check out our articles:

Check out this vide by BloodThirstyLord showing a winning match to give you an idea on its gameplay: