What Are Milestones and How They Work in Sea of Thieves

A look at the new Milestones feature in Sea of Thieves. 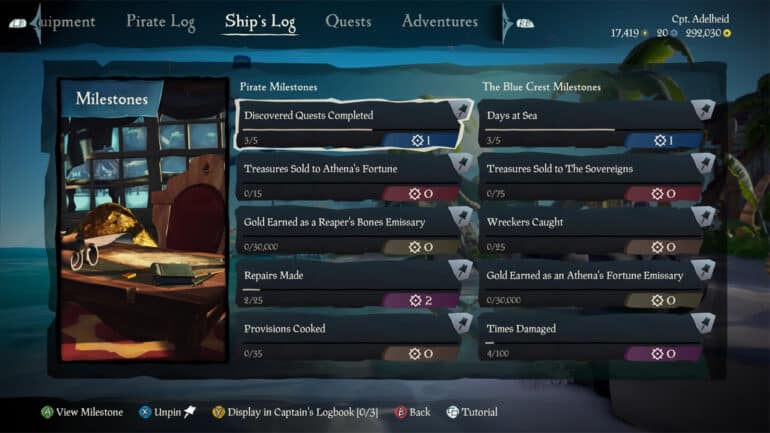 Milestones are a new mechanic added in Sea of Thieves that help players track their own progress through the life of piracy, as well as unlock special rewards to help customize the ship. Basically, these milestones are the mini in-game achievements that players can strive to obtain, raise, and complete.

In this guide, we will take a look at how the Milestones mechanics work and see just of a few examples of what are in store for those who wish to complete them.

Milestones are a record of a player’s accomplishments as they sail through the sea and go on voyages. It can also be considered as a list of tasks that players can complete indefinitely to raise their Milestone Class. When certain levels are reached in a specific kind of Milestone, rewards will be unlocked and their rarity will depend on the level of the class. These rewards can be used to customize ships in the way that better represents the kind of play style the player has gone through.

Milestones are categorized by their themes known as Alignments. There are a total of seven Alignments, plus one that is only tied to the pirates themselves, each one having their own set of activities and deeds. Players can select any of these alignments to accomplish or focus on depending on the kind of adventure that they want to have for their gameplay.

The tasks under each alignments can either be pinned to the ship’s log or displayed on the captain’s log book. However, this does not prevent the other unpinned tasks from getting any progression when the applicable tasks are being done by the player.

All Milestone Alignments can be leveled up by repeatedly completing the appropriate tasks under them. Each milestone task completed will increased the class of that milestone by one. As the classes of each individual milestone goes up, the amount and quality of the rewards that get unlocked also increases. Each milestone class will also count towards the total class of the Alignment it belongs to.

Once an Alignment has reached Class 50, the player will be rewarded with either a Legendary Title or a Legendary Ship Title; the ship title will allow players to purchase another ship of the same type.

A major perk of completing milestones is it will unlock trinkets and other pirate and ship cosmetic items that share the theme of the Alignment the completed milestones belong to. The higher the quality of a trinket or a cosmetic item is, the higher the class from a particular alignment is needed to unlock it.

Completing each milestone task listed down in each alignment will increase the milestone class by one. Each milestone will also provide rewards that belong to the theme of the Alignment it’s under.

Once a player has obtained the highest reward for a milestone, they can still level up its class, however they will no longer be able to get additional rewards from it.

Check out this video by Ghost Admiral explaining how Milestones work: