All Vampire The Masquerade Swansong Endings

A guide on all the possible endings in Vampire: The Masquerade Swansong. 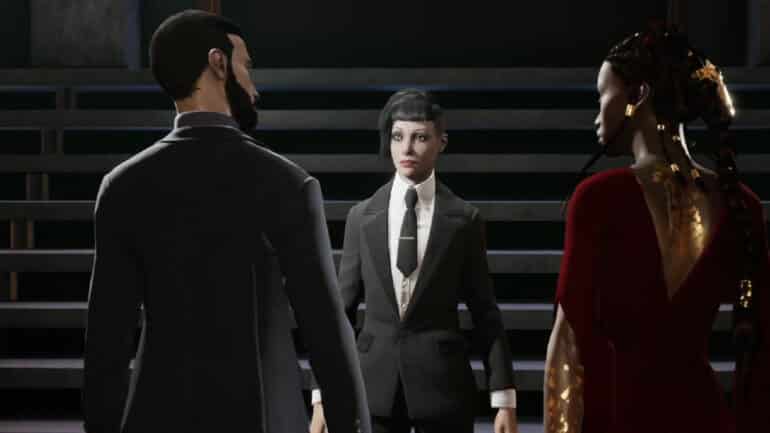 Vampire: The Masquerade Swansong has many different endings due to its choice-driven narrative. In Swansong, players get to decide on the flow of the story through the eyes of three main characters: Emem Louis, Galeb Bazory, and Leysha. Because of how the story is structured, there can be different variations of the ending depending on the events that happen, or who survives at the end.

There are several distinct endings that are depicted by an epilogue. These are dictated by the events and criteria that get met at the end of the final cutscene. Since these are events-based, more than one epilogue can appear at the end.

As for what the true, good, and bad endings are is entirely up to the players’ interpretation. However, the majority of the players agree that it is based on who lives and who dies, with the true (best) ending being no one from the Boston Camarilla dies at the end.

The color of the epilogue does not really go along with this notion, but rather it ties closely towards the involvement of the British Camarilla on the fate of the Boston Camarilla, which could also be considered as part of Swansong’s secret ending.

With regards to the final cutscene, parts of it will also differ depending on the choices made, but it usually starts with the Prince narrating a monologue about the events and the future of the Camarilla. Her lines will also slightly change based on the outcome.

These endings are depicted by an epilogue at the end of the story and are based on certain events’ outcomes.

A Spirit of Harmony

Hartford Chantry and Boston Camarilla have entered a unification pact thanks to Emem’s efforts.

To get this ending, Emem should protect the Hartford Chantry and make sure they are alive to make the unification pact with the Boston Camarilla, and she should find out who the traitor is and kill her (Hilda) or get her killed.

Emem was successful in releasing the virus in the Long Island base which will hinder the Special Affairs Division’s progress on hunting down the Kindred.

To get this ending, Emem should successfully install a virus in the SAD base.

Boston Court finds itself in a financial situation after the death of Jason Moore. A rebellion amongst the ranks of the Kindred is imminent because of this.

To get this ending, Jason Moore and Galeb must not survive following Galeb’s attempt to rescue Moore.

The Fall of the Child King

Emem betrayed the Anarchs and Baron Thane gets killed by Yardley. They Anarchs then stormed the the Long Island base, only to be decimated by the SAD soldiers. Because of the vacuum of power left by the death of the Baron, the remaining Anarchs fought amongst themselves, which caused their demise.

To get this ending, have Emem choose to get Yardley by her side, as Yardley will eventually kill Baron Thane.

The Return of the Redcoats

The traitor within the Boston Court has never been identified. Because of this, the traitor managed to help members of the British Camarilla sneak into Boston and take control over the Boston Camarilla to evade the Second Inquisition.

To get this ending, Emem should either never figure out who the traitor was from the SAD Base’s database, or by dying after learning who the traitor was. If Emem learns about the traitor’s identity, this ending can be achieved by dying at the hands of Kurt Densch at the SAD Base through a failed confrontation, or during the talk between Emem and Hilda in the Prince’s Quarters (11:00 p.m.), you must choose to Go with Her to Her rooms and choose either to Report Her to the Prince or Quit the Camarilla without having the third Celerity skill on Emem. This will cause Hilda to attack which will get Emem killed.

Hartford Chantry and the Boston Camarilla has entered the pact, but since this was not part of the British Camarilla’s plan, they also drove away the Tremeres of the Hartford Chantry when they executed their hostile takeover.

To get this ending, Emem must successfully protect the Hartford Chantry, but fail to discover the identity of the Camarilla’s traitor.

Emem decided to follow Hilda’s plan after learning that she’s the traitor. When the British took over Boston, Emem’s existence was tolerated, however it eventually did not turn out for her so well.

To get this ending, during the talk between Emem and Hilda in the Prince’s Quarters (11:00 p.m.), you must choose to Go with Her to Her rooms and Follow Hilda’s plan.

Kurt Densch, a Nosferatu Strand Master, is now on the loose and is directing his murderous rage at the Camarilla after the destruction of his longtime love, Jara Drory, thinking that the Camarilla has sold her to the mortals.

To get this ending, Emem should fail the confrontation against Kurt at the SAD Base in which Kurt will not reveal herself to him.

Emem has several different endings and arguably has the most impactful role among the three main characters. Below are the possible endings categorized on whether she lives or dies.

Galeb’s endings are few and they just revolve on whether he lives, dies, or stays in the Camarilla. His alive endings will always have him with half of his face burnt.

Leysha’s endings are not tied to an epilogue ending, at least not directly. It also depends on whether her daughter, Halsey, lives or dies.

Although it’s not directly specified within the game, many players agree that having everyone that can be saved in the game (at least the close side characters that are part of the Camarilla) survive until the end of the game is considered as the True Ending or the Best Ending of Swansong.

This may get challenging, especially that luck also plays some role when it comes to succeeding confrontations, but there will be a point in the game where you can redo a scene. Here are the events that constitute a True Ending:

As mentioned, these endings are not defined in the game, however we can take the liberty of labeling what are the good, bad, and worst endings of Swansong based on the death criteria.

**This guide will be updated in case there are endings that we have not included in here yet.

Check out this video by VGS – Video Game Sophistry showing how to get the True Ending in Swansong: