The final reckoning is upon us all 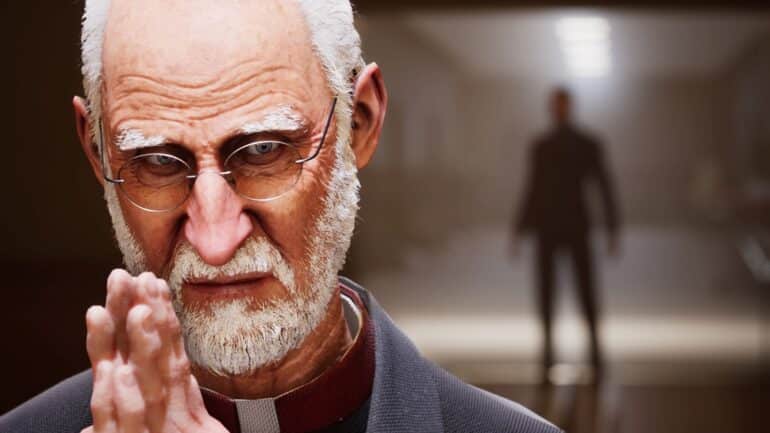 This is it. The final fight against Stanford. Everything has led up to this point. Galeb Bazory is ready for anything Monsignor Stanford can throw at him.

And with that out of the way, let’s finish the fight for Boston.

If all our decisions line up, we should be walking through an empty hallway leading up to the chapel. We know that Stanford is inside.

The only room that matters in that long hallway is the one that has the bodies of the other members of the Society of St. Leopold. It is located a couple of doors before the chapel on the right side of the hall. On the coffee table, you’ll find a bible belonging to Stanford. If you have at least Education(2), you can study the bible to learn that Stanford was using scripture to better understand what he is.

Armed with this knowledge, we are more than ready to take on Monsignor Stanford.

As Galeb enters the chapel, Stanford confidently makes a stand, proclaiming that his faith is his shield. He will command you to come no closer.

If you have Education(3), you can understand what this so-called power is and you begin to resist it. Otherwise, your body won’t listen to your commands. But this is but a taste of what’s to come.

The Final Confrontation 6 stages. And you are only allowed 2 mistakes. As an additional note, do not bother with Dominate. It will not work with him until his faith is broken.

In the first round, you need at least Persuasion(4) to get past the initial salvo.

For the third round, you’ll need at least Psychology(4) to defend yourself. Otherwise, you’ll have to take the hit.

Stanford retorts then that Vampires have led to the ruin of this world. For this round, you’ll need at least Rhetoric(2) or Persuasion(4) to succeed. If you want to save Focus for the last 2 rounds, choose ‘We’ve already reigned over the world’.

We are getting close to the end, and it’s starting to feel like Stanford is contradicting himself. If you have at least Psychology(4) or Intimidation(5), you can counter his argument. No other answer will work.

For the final and closing round, choose ‘I am a predator! I hunt!’. That one is guaranteed to work.

And so ends Stanford. At the end of it all, it was his hubris that killed him. He believed that his faith could overcome anything. It almost did. But a predator can only be true to his nature. And Galeb won this test of wills because his belief in himself was stronger than giving in to fear.

If you kept Richard alive. He will walk into the chapel, and by the Prince’s order, replace Stanford as the new head of the SAD in Boston. This will give the Camarilla time to relocate somewhere in New England. But that’s a story for another time, I suppose.

All that’s left now is the epilogue. I will leave that to you, dear player. Good luck with your choices and hopefully you get the endings you’ve worked towards. I hope these guides helped you out in your playthrough.

And that’s it for Vampire the Masquerade Swansong. See you next time in another walkthrough guide.

Also, watch this video by VGS – Video Game Sophistry on Vampire The Masquerade Swansong True Ending – How to Get the BEST Ending: