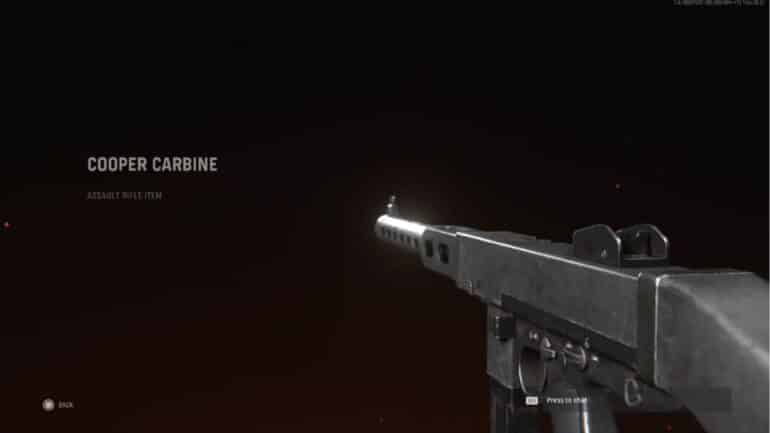 As part of the season one and Pacific updates, the Cooper Carbine was added to both Vanguard and Warzone. As soon as you get your hands on it, it should be leveled up as soon as possible to achieve the best Cooper Carbine Warzone loadout.

For medium-to-long-range combat, this assault rifle is an excellent choice and the most popular in the game. For the best results, we’ve got all the necessary attachments and Perks to achieve the best Warzone Cooper Carbine loadout.

With the best Cooper Carbine Warzone loadout, you can outperform the top guns in terms of both rate of fire and accuracy. This is followed by the Mercury Silencer, which reduces recoil but comes with a price: ranged damage. But don’t worry, the 22″ Cooper Custom barrel makes up for it by increasing the damage yet another notch.

Improved accuracy at long range is made possible by the m1941 Hand Stop, Polymer Grip and Cooper 45RS on the Cooper Carbine. Fire rate and ADS speed will be boosted by the use of 9mm 60 Round Drums and the Lengthened ammunition. Then, add the G16 2.5x Optics to acquire even more control over recoil and accuracy at the tradeoff of aiming down sight speed.

As for perks, Vital is essential because it amplifies torso damage, making it simpler to knock out other squads because the critical hit area on enemies is widened. For your second perk, we pick Fully Loaded, which provides unrestricted ammo for this potent weapon.

The weapon’s overall stability in mid and long-range battle is enhanced with the addition of these attachments, also making it an excellent choice for close-quarters combat.

In close combat, grenade explosions are a concern, thus it’s a good idea to wear the E.O.D for added protection. You can use Overkill to switch between the MP40 and a long-range weapon depending on the situation. The speed at which you can change to another fully-loaded weapon or replenish your primary weapon is accelerated when you’re Amped.

Semtex can be used to push enemies out of cover, while a Stim can offer you an instant health boost in the heat of battle.

Other powerful long-range weapons are available in Warzone, with the STG44 proving to be one of the game’s most effective. Despite the fact that it is lethal on its own, this weapon may be made even more powerful by putting certain attachments to it.

An SMG will be necessary to supplement the Cooper Carbine’s long-range capabilities in close-quarters combat. We believe the MP40 is the greatest choice.

An SMG that has a decent-sized magazine that you can use instead of waiting for your Cooper to reload makes sense for how quickly bullets are used up by the Cooper.

How to Unlock the Cooper Carbine in Warzone

Warzone’s Cooper Carbine requires 15 headshot kills with an AR in a single match in order to be unlocked.

Although it’s easier to rack up more kills in multiplayer, the weapon may still be unlocked in Warzone matches, even if it takes a little longer overall.