Get all the new trophies and achievements in the Cuphead DLC. 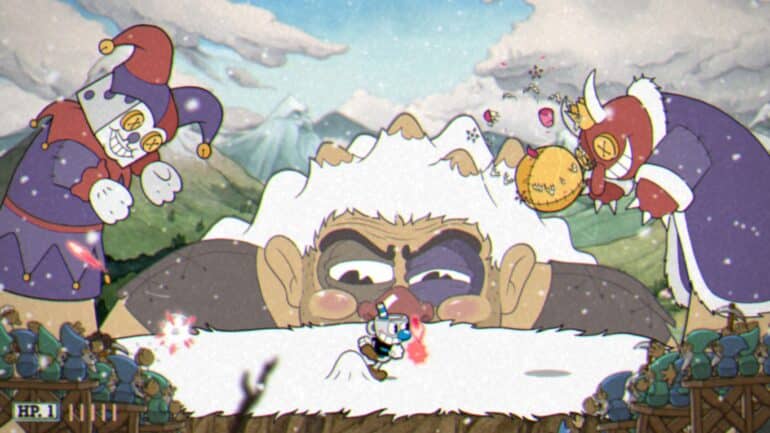 Players are looking for a Cuphead DLC achievements and trophy guide. The cleverly named Delicious Last Course (DLC) has made its debut introducing a new island for players to explore and new challenges to face. Do you have what it takes to get every achievement and trophy in the Cuphead DLC?

The Cuphead: Delicious Last Course has 14 new trophies to achieve. All of them have to do with the new island the Cuphead DLC takes place in. Here is the list of Cuphead DLC achievements you can get:

None of the trophies listed above require internet connection to be able to achieve. You can also partner up with a friend to make the journey easier. We’ll show you how to get every trophy so you’ll have an easier time coming out of Inkwell Isle IV a winner.

Pretty much all the trophies in the Cuphead DLC are considered Bronze trophies. This is for both Pack 1 and Pack 2 of the Delicious Last Course DLC.

You can pretty much get Compliments to the Chef just by completing the entire. However if you want the A Vacation In The Wilds achievement, you also need to defeat the secret boss which pretty much entails getting A Horrible Night To Have a Curse achievement.

To get to the secret boss, you need to go to the Graveyard and purchase the Broken Relic for one coin in the nearby shop. You can find this at the southernmost of the island just above the Howling Aces boss fight location. You then have to the Glumstone Giant’s region and look for the three climbers standing in the podium. Pay close attention to what they say because they’ll give you clues as to which tombstone you need to interact with to fight the secret boss.

Once you got what you need, head back to the Graveyard and solve the puzzle. You will then fight the secret boss which will give you the Cursed Relic which you need for the Paladin achievement. You’ll have to equip it and fight every boss in the game to get the achievement.

As soon as you get to the new island, you can play as Miss Chalice. Play as her soon as you can to get the Alive and Kicking, Decadent, and The Golden Touch achievements. The last of the trio can be pretty tricky to get as you’ll have to time Miss Chalice’s Super Art to defeat a boss.

When trying to get Checkmate and A King’s Admiration the bosses you’ll have to beat won’t have the standard way of combat. Instead, you’ll deal damage by parrying their weak points as they show up around the level.

Cuphead DLC Achievements and Trophy Guide. We hope that you found this article to be informative. Stay with us some more, because we have more Cuphead content for you to check out.

Check out this Youtube video from BeardBear showing a fight against all the bosses in the Cuphead DLC with no damage. You’ll have to take a few notes if you want all the Cuphead DLC achievements.