Destiny 2 All Weapons in the Bungie 30th Anniversary Pack 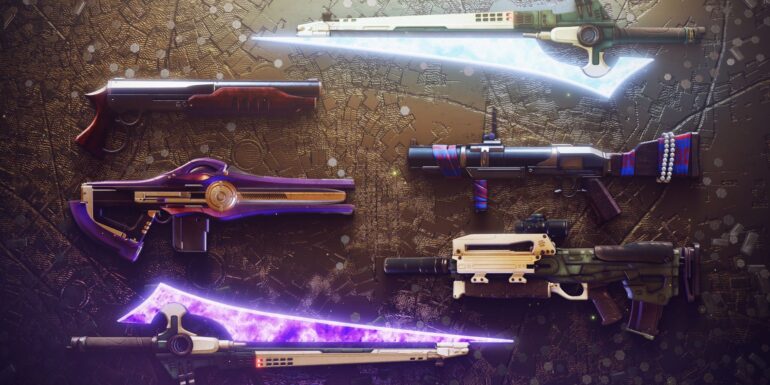 Thinking of buying the Bungie 30th Anniversary Pack for Destiny 2? There’s are some pretty cool weapons included in the DLC. From the infamous and much loved Gjallarhorn to the new Halo inspired weapons, there’s a lot in this pack that might give some bang to your buck.

Destiny 2 All Weapons in the Bungie 30th Anniversary Pack

Hang on to your seats, cause there are some pretty cool weapons included in the 30th Anniversary Pack. Of course, they’re not just going to be handed to you. Bungie gives you some fun opportunities to feel great about earning these weapons yourself.

You’ll be able to obtain both quests for these exotic weapons from Xur. They will also contain Exotic Catalysts that you can use to upgrade them further.

The Forerunner can look like a familiar gun to those who played Halo. This new exotic weapon was inspired by the Magnum from Halo Combat Evolved. This exotic weapon is an excellent homage to the most iconic Xbox game and carries some pretty cool perks.

The Gjallarhorn is a familiar face to those who played the original Destiny. This infamous rocker launcher is added back into the franchise as an exotic Rocker Launcher you can get from Xur. Here’s the full guide into acquiring the Gjallarhorn for yourself.

The 30th Anniversary Pack introduces a new mode called Dares of Eternity which is a six player activity which grants treasure keys upon completion. These treasures keys can be used on Xur’s Treasure Hoard, a new social hub, to obtain these unique weapons.

Like the Forerunner above, this BxR-55 Battler is also inspired by a Halo 2 weapon. If you’re familiar with the Battle Rifle, then the BxR-55 can feel like its twin.

This old fashion looking shotgun doesn’t seem very advanced for the setting, however the Wastelander M5 is the first Legendary Tex Machina in Destiny 2.

Despite its name, Pardon Our Dust isn’t the most noteworthy weapon in the Bungie 30th Anniversary Pack. Still this grenade launcher packs quite the punch.

Just at a glance, you know this weapon is from Halo. The Retraced Path is inspired by the Focus Rifle from Halo Reach. This is Destiny 2’s first Legendary Trace Rifle which makes it particularly noteworthy.

Half-Truths is a weapon clearly inspired by the Halo Energy Sword.

After you first speak with Shaw Han, you’ll be able to unlock the Grasp of Avarice dungeon. Encounters from this dungeon have a chance of dropping the weapons below. Most of them are brought back from the previous Destiny game so older players may be more familiar with them.

The Grasp of Avarice dungeon does have a master variant. So if you think you’re ready, you can also get the adept variant of each weapon below.

The Eyasluna has some pretty decent stats for a Hand Cannon. It has 68 stability, 56 range, and 80 aim assist. Nothing compared to the Malfeasance but it’s still an awesome drop.

The Matador 64 has pretty awesome stats and a decent range for a shotgun. It has a noteworthy 68 range and 49 handling.

The 1000 Yard Stare isn’t just a condition for a facial expression. This weapon can zoom in on targets with great precision. It has 44 zoom and 66 aim assist.

For more Destiny 2 related content, feel free to read our other articles.