Be careful, this quest may be bugged. 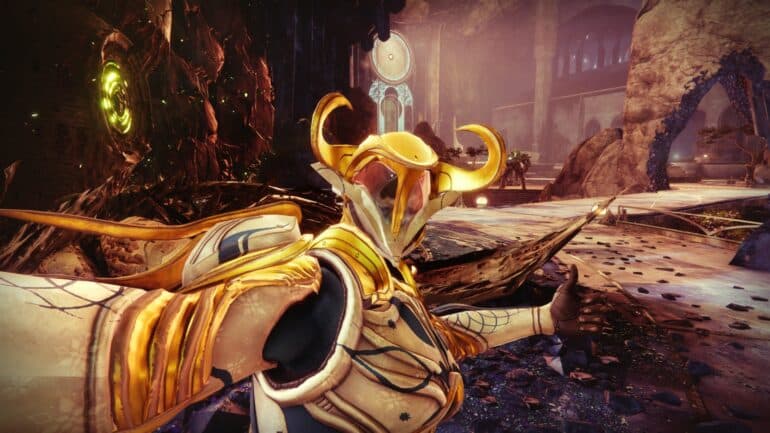 If you’ve been looking for a Destiny 2 Coup de Grace Quest Guide that shows you how to get past this new quest Bungie added, then this guide is perfect for you. We’ll show you how to complete this quest and get around the general bugs that have been plaguing it. There are some awesome rewards waiting for you at the end, so this may just be worth it.

The Coup de Grace in Destiny 2 isn’t at all challenging. Though many players have complained the quest to be bugged at times that prevents further progress. There is a way to get around it but it may include knowingly doing certain steps.

First, we actually have to begin Coup de Grace. There are certain requirements before you can actually begin this quest. You’re going to have to get the Improved Speaker II lure upgrade from the Crow who resides in The Tangled Shore. You can only acquire this upgrade if you’ve reached reputation Rank 7 with him. So if you haven’t actually progressed far enough with him, you may have to start taking his quests first.

Once you have the Improved Speaker II lure, you have to go and speak to The Spider who will mod your lure wit Prey Mod High Celebrant which you’ll need for the Coup de Grace quest.

After you’ve finished all the above, you’ve officially begun the Coup de Grace quest which will have you heading into the Dreaming City.

There are multiple phases into the fight with the High Celebrant. There is a glitch that could cause players not to get the rewards their entitled to after defeating it. According to Bungie, this glitch may be due to finishing this quest early by defeating the High Celebrant too soon before it reaches its other phases. So be warned that you may want to take this fight slow.

You’ll have to shoot dark orbs in the Ascendant Plain in order to reach new areas where you’ll continue the Hunt. Take note that when a dark orb doesn’t take any damage after you shoot it, then the quest is possibly bugged. We’re sorry but you’ll have to restart the quest if this is the case. You’re going to want to shoot these orbs point blank with a shotgun.

Throughout the Ascendant Plain, you’ll be running and battling some small time enemies including a Wrathborn Ogre that should be easy to dispatch. After doing so, you’ll have to redeploy your Cryptolith Lure once again in the Dreaming City to materialize some platforms you can climb over which will lead you back to the Ascendant Plain.

This is where you’ll fight the High Celebrant for real. It is a relatively simple boss fight but Bungie has warned players of not defeating this boss too quickly else you may be bugged out of receiving the mission rewards.

Coup de Grace How to Get Fourth Mark Ship

You’ll get the rare Fourth Mark Ship which will show up in your inventory upon defeating The High Celebrant. However, there is a known bug that causes this reward to not be given to the player despite accomplishing the requirements.

We recommend taking your time with The High Celebrant in order to ensure you get the Fourth Mark Ship. Thankfully other rewards such as getting the Malfeasance Hand Cannon and Thorn Armor in Destiny 2 aren’t bugged at all. If you’re interested in getting those exclusive weapons, be sure to check out our other Destiny 2 guides.