A guide on how to complete the Kill the Messenger quest and get the Dead Messenger in Destiny 2. 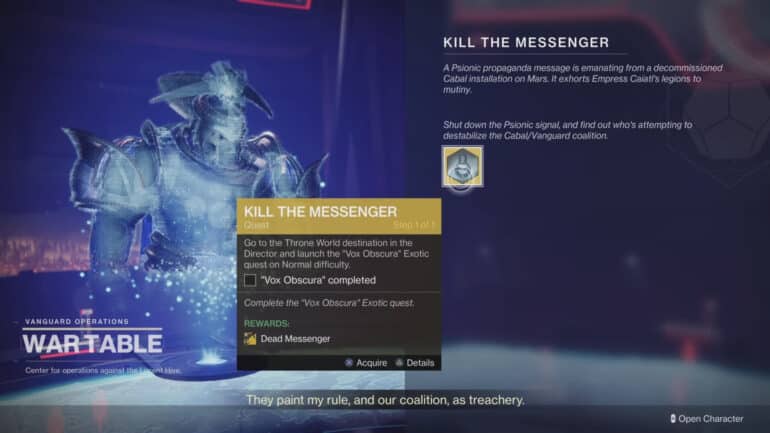 The Kill the Messenger Quest is a new exotic quest that Guardians can complete in Destiny 2. Within this quest is the Dead Messenger, a new exotic grenade launcher that guardians would want to get their hands on for its versatility and firepower.

In this guide, we will take a look into the steps on how to unlock the Kill the Messenger quest and how to get the Dead Messenger.

How to Get the Dead Messenger in Destiny 2?

Get the Season of the Risen Season Pass

Players will have to have the season pass for the Season of the Risen to get access to the Kill the Messenger Quest. The season pass can either be obtained by purchasing the Deluxe Edition of The With Queen DLC, or it can be purchased separately through the Eververse for 1,000 Silver.

Complete the first two missions of The Witch Queen Campaign

Completing the first two campaign missions, The Arrival and The Investigation, will unlock the Hard Evidence optional quest which leads to the Kill the Messenger quest. Both campaign quests have a recommended power level of 1360 and are pretty much straightforward quests.

First, you will have to go to the Evidence Board at The Enclave to initiate the Hard Evidence quest. You will have to recover a sample of an Osmic Fragment in the Quagmire Area of the Throne World.

As soon as you pick up the sample, you will be ambushed by a the Lucent Brood. Defeat all the enemies to survive this ambush, and then head back to the Evidence Board to log the Osmic Fragment sample. Review the case at the board to proceed with the Rising Tensions quest line.

The Rising Tension Quest can be obtained after completing main story mission, The Investigation, an initial quest that leads you to Savathun’s Throne World for a brief meeting with an undercover agent only known as Fynch. You will receive the Rising Tension quest after completing this task and speaking with Ikora Rey on Mars, alongside the first Witch Queen campaign mission.

After completing the Rising Tensions Quest, you’ll acquire the Legendary Recurrent Impact Machine Gun and be able to access the next mission, Operation Elbrus, which are weekly quests for this season.

Week 1 of Operation Elbrus are the first 6 steps that are available once Operation Elbrus Quest is unlocked. Be advised that the PsiOps Battlegrounds that this quest line refers to is the one located in H.E.L.M. and has a recommended power level of 1500.

The Kill the Messenger quest will have you go back to the Throne World and complete the Vox Obscura Exotic Quest. Be advised that this quest has a recommended power level of 1550.

Check out this video by Ebontis on how to clear the Vox Obscura quest: