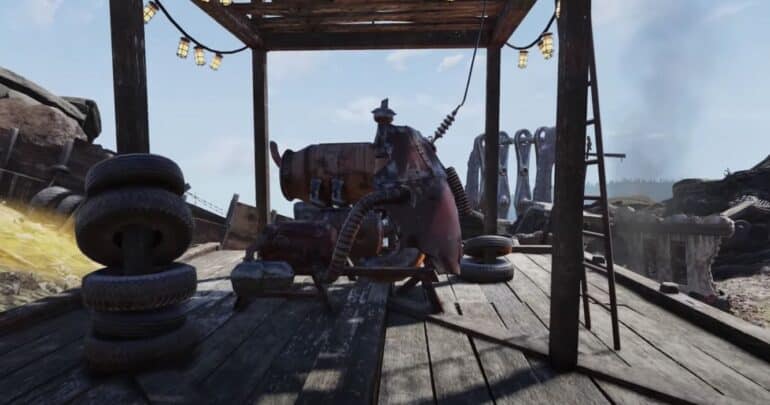 Here are the objectives you need to do to complete the Eviction Notice event:

It is heavily recommended that you’re at least level 50 before tackling the Fallout 76 Eviction Notice event. You’ll be facing off against an army of Super Mutants and defending a location for a specific time.

You first need to head over to The Foundation Outpost in Fallout 76 to start the Eviction Notice event. You’ll find the deceased body of Kenneth Dean who was the one who made the broadcast which will give you to objectives to start the event.

While the objectives don’t sound too hard to complete, it’s actually fairly challenging due to the quantity of foes that swarm you from every direction. Focusing on one direction leaves the Rad Scrubber to be attacked from other sides. Your goal isn’t just survival but to protect the Rad Scrubber while it does its job clearing the area of radiation.

You really need to bring a Power Armor, hazmat suit, or the Chinese stealth armor due to the heavy radiation of the area. Forgo stealth builds and focus on ones that make you a tank. If you don’t have anything that resists radiation then this event is over before it even started.

Listen to the Broadcast of Kenneth Dean

Once you arrive in The Foundation Outpost, you’ll hear the broadcast from Kenneth Dean. This will be automatic and you’ll receive the instructions of what to do for the event afterwards. You can choose to delay going further down if you need to prepare first because once you’re close enough to the objective you’ll receive a 2 minute timer telling you to turn on the Rad Scrubber or the event fails.

Once you repair the Rad Scrubber the event truly starts. You’ll have to accomplish a series of objectives before making a stand against the Super Mutants. Keep an eye on the health of the Rad Scrubber which is displayed on the upper right side of the screen.

One of the objectives is to destroy 6 Meat Bags. The Meat Bags themselves are scattered throughout the ten poles around the location. Their spawn points are random but they’re never too far.

Due to how difficult this event is, players are actually encourage to spawn camp the Super Mutant spawn points to get an advantage. If you’re working with a team, this could be an advantage. Split up into two groups with two players camping spawn locations and the other two defending the Rad Scrubber.

The Floaters and Mutant Hounds aren’t too problematic as they’re sole attention is usually attacking you. The challenge is the Super Mutants who will swarm you and attack the Rad Scrubber. If the Rad Scrubber takes too much damage, the event is failed.

Tackling this event with a team will only increase the number of Super Mutants attacking you. The sheer amount can be overwhelming so there needs to be proper strategy and team coordination to get things done. Players who die during the event will respawn quite a long way from the event location making any fatalities a large risk.

Super Mutants are weak to headshots, which you should focus on during the Fallout 76 Eviction Notice event. With the Mutant Slayer legendary effect, they’ll be dropping like flies. Since you have so many to deal with, it’s in your best interest to take them out as soon as possible.

Upon completion of the Fallout 76 Eviction Notice event, you’ll receive the following rewards:

That’s our Fallout 76 Eviction Notice event guide. We hope you found this article to be informative. Check out our other Fallout 76 guides which will help you thrive in the game.

This Youtube video from Naked Vault Dweller is a video tutorial showing you what to do for the Fallout 76 Eviction Notice event.